You (and now your kids) can wear Lighthouse Hockey wherever you go, support a good cause and honor a legend all with one click.

We at Lighthouse Hockey, the undisputed champion of New York Islanders blogs on SB Nation, consider ourselves the leading forces of cutting edge Islanders meme haute couture. Designed with its loyal readers in mind, these shirts are available through SB Nation partner Web Community Tees at some pretty reasonable prices.

Do You Make Money from These?

Lighthouse Hockey receives a portion of the sales of each shirt. Our entire portion will be donated directly to the Center of Dementia Research, located in Orangeburg, NY.

Dementia is a condition that affects 47% of people over the age of 85. Someone you know may be struggling with symptoms now or in the future.

One very special person dear to all Islanders fans dealt with the severe symptoms of aging. On August 28, 2015, Al Arbour passed away at the age of 82 after suffering from health problems related to dementia. The former Islanders coach is a member of the Hockey Hall of Fame, coached the Islanders for 1,500 games, 740 wins, five Stanley Cup finals and four straight championships.

To say none of us would be here, reading and discussing the Islanders today, without Al Arbour would not be an overstatement.

The Center for Dementia Research seeks to understand the pathogenesis of Alzheimer's disease and other dementias and to develop innovative therapies for prevention and treatment. Donations to the CDR are used directly to support research projects of the scientists.

Donating our modest profits from these shirts to the CDR is the least we can do to help discover more about this heartbreaking affliction and to honor the coach that has given us so much. All the donations will be made in the name of Coach Al Arbour.

If you'd like to donate to the Center for Dementia Research without buying a shirt, you can do so here.

New: Do they ship to Canada or Europe?

Yes, yes, yes! Finally, the shirts can be shipped to Canada and Europe to Islanders and LHH fans across the globe. Please see each shirt's page for shipping info. Prices subject to change.

Pay tribute to both hirsute, heady, smooth-skating Islanders defenseman Nick Leddy and late, legendary New York electronics store Crazy Eddie in one convenient, timeless t-shirt. The "Crazy Leddy" shirt features a goofy 80's style and an INSANE tag line befitting both of its namesakes. Available in bold black only. Pick one up here. 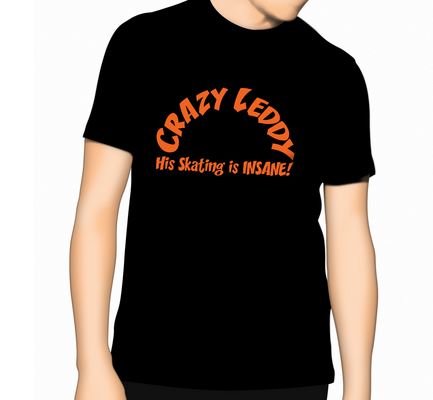 For 19 years, Al Arbour said all the right things behind the Islanders bench. Now, you can wear one of "Radar's" most famous phrases as a special salute to the coach and his psychology. Down three games to none to the Penguins in the 1975 playoffs, Arbour asked any player who didn't think the Islanders could win the series to kindly leave practice. The players, all of whom stayed, rallied and won four straight to take the series in seven games, becoming only the second team in NHL history to accomplish the feat.

Our Al Arbour shirt features the coach's quote under a pair of glasses with hockey sticks for ear pieces. In workout gray only but in multiple styles and sizes for both kids and adults. Pick one up here. 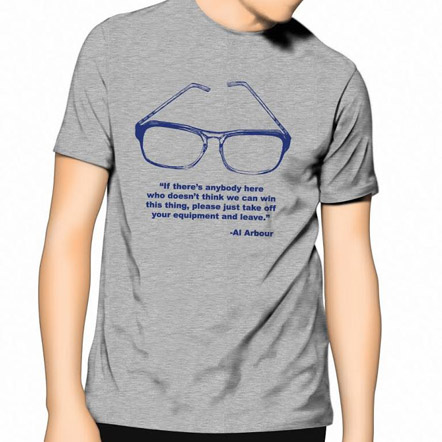 In every Lighthouse Hockey home game preview, Nassau Veterans Memorial Coliseum was described as "Gloriously Unsponsored," setting it apart from other corporately-named arenas. Celebrate the Islanders' history at the Old Barn or your own unique independence with this tee featuring a Coliseum replica font and hockey rink logo. Comes in white or light blue and both men's and ladies styles. Pick one up here.

Here's a close-up of the art:

Relive Garth Snow's accurate and empowering analysis of why the team drafted prospect Joshua Ho-Sang and stick it to hockey media blowhards everywhere with this tee. The design features Snow's classic draft day quote inside a silhouette of the stage at the moment of Ho-Sang's selection. It's available in two colors: Brazen Blue or Wise-Ass White. Pick one up here.

Long-time readers know Lighthouse Hockey for its in-depth analysis, quirky sense of humor and leanings towards the principles of Communism. This shirt pays tribute to one of the most enduring memes of the blog, showing the hammer and sickle with "LHH" underneath in glorious orange and dark blue. Blog address is printed on the back. Probably our most requested shirt design. Pick one up here. 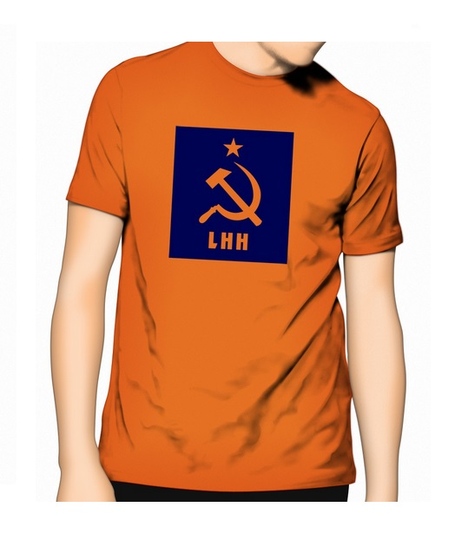 Also available is a white shirt with the large Lighthouse Hockey logo printed on the front. Perfect for repping the team and your favorite Islanders blog among the normals. Pick one up here.

Three designs are also available in hooded sweatshirt form: "Gloriously Unsponsored" in white, the "Al Arbour" in gray and "They $#!% on Me, Too" in navy blue. Click the links or pics to order. 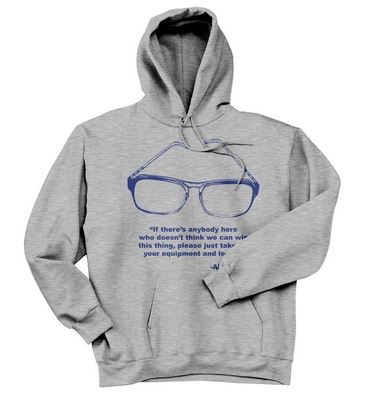 These couldn't have been conceived and brought to life without the passion and personalities of our readers. Special thanks to SB Nation and the great Joel Hollingsworth and Tony Henson of Web Community Tees for being generally and supremely awesome. Thanks also to Joel Vander Eems of Vox Media for helping coordinate the donations. Keep an eye on this space for new additions to the line.

In the meantime, let's ask Top American Fashion Designer Michael Kors what he thinks of the shirts...