Here are a few quick thoughts from the Islanders’ 5-2 loss in Nashville last Saturday.

There’s an old expression that fits nicely here: You can take a horse to the water, but you can’t make that bloodthirsty beast of an animal drink.

Similarly, a hockey coach can draw up a good gameplan, but the players need to go out and execute that gameplan as intended.

Last time, I highlighted a few plays in which the Islanders executed Barry Trotz’s neutral zone trap successfully against the Sharks. They dropped the third forward back, had the first two forecheckers angle the Sharks towards the trap, forced a turnover and transitioned to offense. It was beautiful stuff.

But in Nashville, the Islanders failed to execute the trap when they dropped back. Let’s take a look at one such play from early in the second period.

The Isles drop a forward back (Komarov), but the team’s positioning is off here. It is the responsibility of the first two forecheckers - the F1 (Ladd) and F2 (Filppula) - to angle the Predators towards the side of the ice the team benches are on.

Ladd did his job here but the F2, Filppula, is in bad position. He should be up closer to the red line, serving as an impediment to the Preds doing what they end up doing here - passing the puck back to the side of the ice opposite the Islanders trap.

Although that “trap” is practically non-existent on this play anyway. Look at how far both Isles defensemen, Mayfield and Boychuk, drop back into the defensive zone. Nashville probably could’ve entered the zone just as easily on their side because of that poor gap control.

Still, the trap is a conservative strategy premised on simply having bodies back to defend. So the Isles still have Leo Komarov dropped back in position to prevent this entry, but he fails to do so. He gets beat cleanly to the outside and Nashville goes on to have some extended zone time.

As nice as it was to see the Islanders use the trap effectively against San Jose, that’s how ugly it was to see them fail to do so in Nashville. Look at the difference in positioning on the two plays: 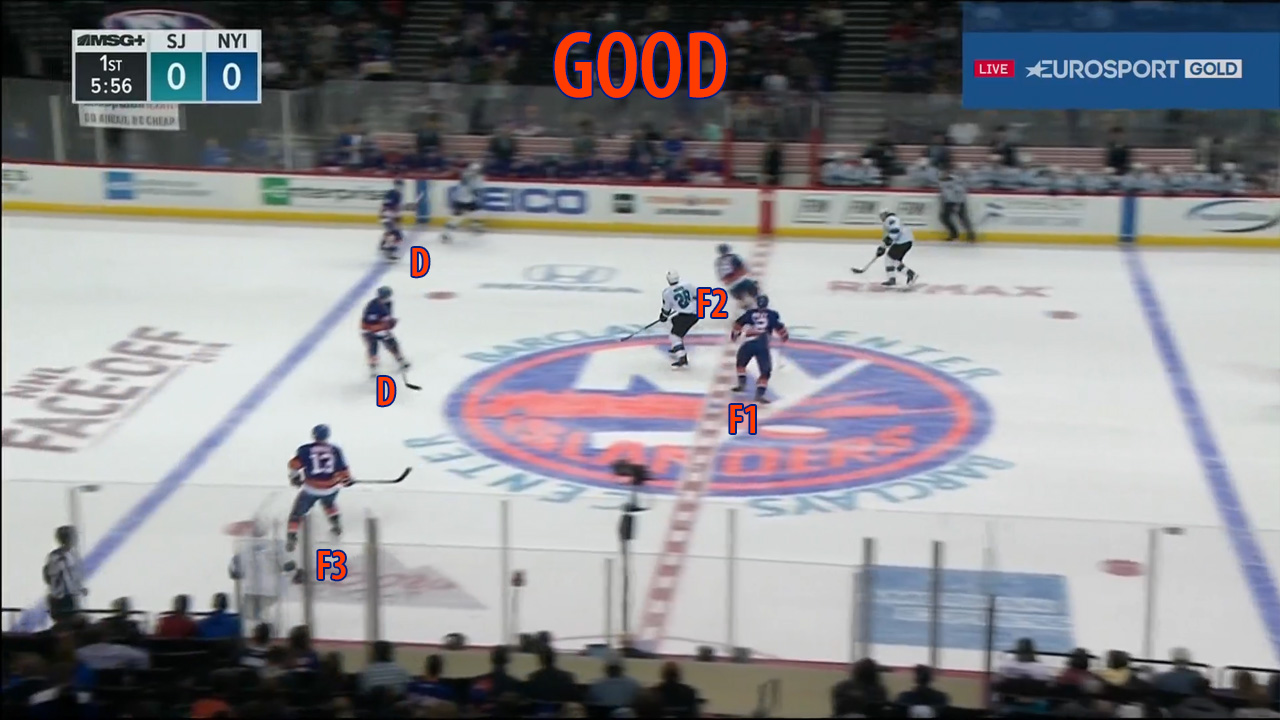 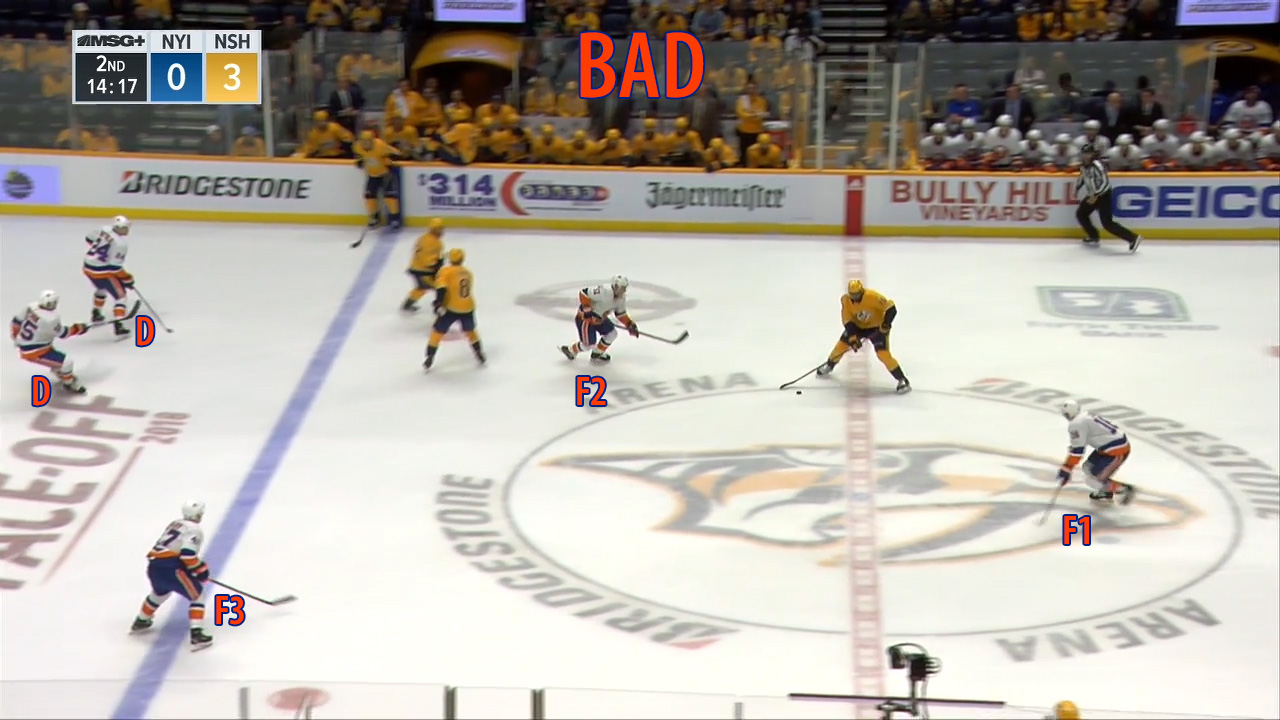 Maybe it was rust after the four-day layoff. Maybe it was because they were playing one of the best teams in the NHL. Maybe it was some combination of both. Whatever it was, it was ugly. When you drop extra guys back, you simply cannot allow the opposing team to waltz into your zone this easily.

Again, a coach can only do so much. He can draw up the gameplan but the players have to go execute it. The Islanders failed to do so in Nashville, particularly in the first 25 minutes of the game.

The Islanders woke up soon after that point in the second period, and that was largely thanks to Brock Nelson. His line with Lee and Eberle was easily the Islanders’ best unit on the night. They created scoring chances and Nelson scored a goal (his first of the season and 100th of his career).

But it wasn’t Nelson’s offense that really impressed me in this game (and the three preceding it). Surprisingly, it’s been his defense.

Coming into the season, most Islanders fans weren’t super enthusiastic about Nelson as the second-line center. But he has played well to start the season and has been noticeably responsible covering for pinching defensemen and backchecking hard.

Here’s one play from the this game that shows Nelson making a great defensive play.

With a defenseman, Boychuk, leading the rush and Nelson as the third forward back, he smartly hangs back and covers the point rather than join in on the rush. When Nashville breaks out moments later, Nelson somehow finds himself as the only Islander back. He is effectively playing as a defenseman here and handles himself admirably, making a really nice poke check to thwart Nashville’s rush.

Why is Nelson the only man back for the Islanders? Because Adam Pelech makes a stupid decision to pinch into the offensive zone. I know, what a shocker.

Pelech is the last man back on the rush with the entire play in front of him. He can see his defensive partner, Boychuk, is already in deep in the offensive zone. Despite this, he nonetheless sees fit to pinch in and risk exposing a forward who is the only man back on defense for his team. He does this for what was, at best, a 50/50 puck.

Look, I did not choose this play so I could point out Pelech’s poor decision. I honestly didn’t even notice it in real time. All I noticed, when it happened, was Brock playing defense as the only man back for the Islanders. Only when looking back at it afterwards did I spot the reason why he was the only man back.

To close, here’s a short video showing some more of Brock Nelson’s solid play so far this season. This includes some nice offensive play as well as several other instances of hard backchecking and good defensive positioning.

I know some of you think we’re only seeing this new-and-improved Brock Nelson because it’s a contract year. But that’s overly cynical, to think he’d be motivated by the prospect of a long-term contract worth tens of millions of dollars.

That’s all for now. The schedule finally starts to pick up for the Islanders beginning with tomorrow night’s game in Anaheim. They need to be sharper than they were during the first half of the game in Nashville.