I am an original New York Islanders fan. I was 10 years old in 1972 when they played their first game in the National Hockey League. It was in the year prior, as I was just learning how to pronounce Giacomin and Tkaczuk, when the news came that an NHL team was coming to Long Island, almost literally in my backyard as it turned out.

Even at that young age I knew I would be a sportswriter. I loved writing, I loved newspapers and I loved sports, especially baseball. I religiously read Newsday, with such fine reporters and columnists such as Steve Jacobson, Joe Gergen and Stan Isaacs, among many others. It was in reading Newsday that I learned that the Islanders were going to practice right down the road from where I lived, in an airplane hangar at Republic Airport in Farmingdale that was being converted into a hockey and tennis center.

The Islanders had me before they had taken their first shift.

John Sterling -- yes, that John Sterling -- called the games on the radio. And that's how I learned about Spinner Spencer, Germain Gagnon, Gerry Desjardins, Gerry Hart and many others. They lost a lot but played a game in Boston that was a crazy one. But bedtime came and I did something I never did before and I never did after -- I listened to the game on a transistor radio under my pillow. Yes, the classic story of the child listening to a ballgame that way.

Even though I wasn't going to games (my parents were busy working and feeding us), I was riding my bicycle up Conklin Street and across Route 110 -- before it became a high-speed freeway you would never allow your kid to cross -- to see the Islanders practice. I'd sit on the wooden benches and watch. A couple of years later I got virtually every player to sign his page in the team yearbook. The very first professional athlete I interviewed was Chico Resch, for my high-school newspaper, in a rickety trainer's room there, at Racquet and Rink. I skated on that rink, on Friday and Saturday nights, before my friends and I got old enough to drive and turned to other endeavors.

As the Islanders grew and came back from 0-3 vs. Pittsburgh and nearly did the same against the Flyers in 1975, and then made the playoffs but lost heartbreaking series in the four years that followed, things were changing. Long Island was among the first regions in the country to be wired for cable TV, and Cablevision's two big sells were HBO and the Islanders, airing on SportsChannel. Cable was cool -- you had all these channels and there were no commercials and everyone was intrigued. Saturday nights became Hockey Night on Long Island. Everyone watched. You'd pick up your friend and his parents were watching the game. You'd visit your Aunt Tillie and she was watching the game. It was big. Saturday nights out didn’t start until the Islanders were finished.

It happened on the streets, too. Naturally we played baseball in the spring and summer, but in the fall and winter, we did not play football or basketball (I can't recall a hoop being anywhere in my neighborhood). We played street hockey. I was a goaltender and thus was burdened with the task of moving my net every time a car came down the street. Eventually we got tired of the cars and moved to a parking lot at the junior high nearby. So many kids came, they had to take shifts.

Finally I was old enough to go to games on my own. A friend and I stood on line to buy tickets to the 1979 playoffs. We saw Tony Esposito stand on his head for three periods before Mike Bossy scored in overtime. But then we saw them lose to John Davidson and the Rangers, and off to college I went.

I remember where I was when Bob Nystrom scored. I was working in a pharmacy, and the pharmacist working that day brought in a small black-and-white TV. I remember where I was in 1982, when John Tonelli scored to tie it and then scored again in overtime to win the first-round -- and very scary -- series against the Penguins. I was outside the campus pub, listening to the game on a radio with E.J. Hradek, a classmate who would go on to bigger and better things.

That summer, I was visiting the Island when my mother came home and told me that I should be at the Farmingdale Meat Market at 3 o'clock [Ed. Note: Goddamn!] Tonelli was friends with the owner and it was his day with the Stanley Cup, but he had something to do and was going to leave it at the shop for a little while. It was hush-hush -- the owner didn't want people lining up on the sidewalk to see it.

My dad and I arrived at the appointed time. And there it was, the Stanley Cup on a table right there in the middle of the store, and we pretty much had a private audience with it. We touched it, we kissed it, we read the names on it, we picked it up and lifted it over our heads. Right there, next to the canned hams. It was fabulous. How can you get any closer to a Stanley Cup championship without lacing up skates? 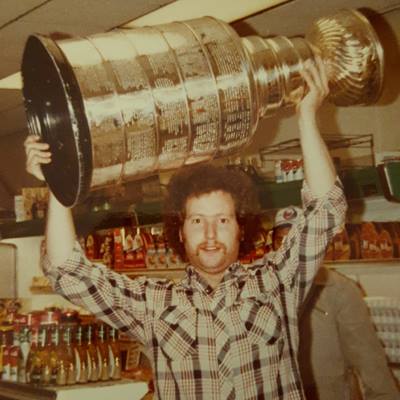 Oddly, my friends were not sports fans. They were music fans. We spent most of our time listening to music and indulging in things we probably shouldn't have been. But on the night of the fourth Cup, I found myself in a car with some of them. I had the game on the radio and I was doing the driving. I said, "We're going to the Coliseum, whether you like it or not." At some point, sitting in traffic on Hempstead Turnpike, I got out of the car and this happened: 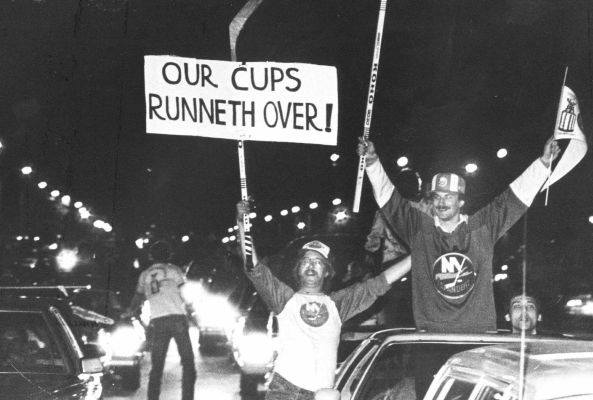 I didn't see that picture until just last year, when I came across a photo gallery in Newsday about the worst traffic jams in Long Island history.

I went on and started a career in sportswriting and ended up as a beat reporter covering the AHL’s Capital District Islanders (and the Adirondack Red Wings, and later the Albany River Rats, too). The team only lasted three seasons, but, boy, did some people come through there. Butch Goring was the coach and he was a beauty, once explaining the team's inconsistency by saying, "We're a real Heckle and Jeckle team." We still talk from time to time. There was Kevin Cheveldayoff, now the general manager of the Winnipeg Jets, and it blows me away every time I see him at a podium or in a news conference because I knew him when he was 20; Travis Green, the new coach of the Vancouver Canucks, and I never saw that coming 25 years ago; Jamie McLennan, columnist and analyst for TSN; and countless others who became scouts and coaches.

Among the many I got to know was Bill Smith, my model for goaltending, and Bill Torrey, who very craftily rewarded me the day before the 1992 draft in Montreal. I opened The Hockey News’ draft special and asked him to tell me who he liked. He pointed to a few players, then, very deliberately, turned a few pages, passing over a dozen players in the rankings, and pointed to Darius Kasparaitis. Right then, without either of us saying a word, I knew the Islanders were going to take Kasparaitis with the No. 5 pick. Of course I wrote about Kasparaitis and looked like a genius. Thanks, Bill.

I left the hockey beat after the 1994-95 season, but I stayed close to the game for a while because there were so many people who I'd come to know -- players, coaches, executives, broadcasters. But after a while the players retired, the coaches moved on, and, now working in baseball, I had little reason to call many of them. The Islanders fell on hard times, but I followed along, watching them from time to time and keeping track of the clown show that surrounded their ownership and management, their arena issues and the political machinery of Nassau County, which I knew all too well.

I jumped at the opportunity, buying a partial plan for the final two seasons at the Coliseum with the express purpose of being grandfathered in when the Islanders moved to Barclays. Now I have a full-season ticket, which I share with a few co-workers and friends, and I sit in a nice corner aisle seat where I don’t need to worry about poor sightlines. My adult daughter has become a fan and goes to games with me, wearing her Mike Bossy jersey, which she asked for after watching some video of the greats.

The Drive For Five continues, and I dream of seeing it live, right before my eyes and the eyes of my daughter, so she knows how it feels to see her team win the Stanley Cup. I was so close to the Islanders before they won, then when they won four straight, and then even closer in the years that followed. Now I'm just a fan, and I’d like to see the fifth myself, too.