At long last the Isles acquired a go-to backup, so good they may go to him even more.

Share All sharing options for: Thomas Greiss Report Card 2015-16: You came at a good time

The New York Islanders goaltending situation, long a source of pain and complexity as the club navigated the worsening health of a player signed to carry the position for 15 years, has improved by degrees.

In 2012-13, they finally had a guy who could stay healthy and at least backstop a playoff team (but not far, once there). But Evgeni Nabokov was old, declining and predictably torched by the Penguins that year. In 2014-15, the Isles finally had a legit number one goalie in Jaroslav Halak, but the expected backup Chad Johnson did not deliver, which put more burden on Halak, which leads to...well...things.

In 2015-16 the Isles finally had both a legit number one and a strong backup in Thomas Greiss, whose previous stops in San Jose, Phoenix and Pittsburgh indicated he could do more than just fill in during back-to-backs.

Greiss #1? The Risk of Casting Halak Away 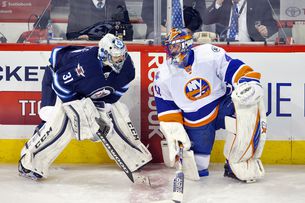 Thomas Greiss may have earned the job, but removing Jaro entirely creates a new weakness.

Indeed. Few knew just how strong and just how needed Greiss would turn out to be.

One thing that's unquestionable: At no point in recent history would the Islanders have been able to get as far as they did with an injury to their starting goalie. Credit Greiss for that.

Greiss appeared in exactly 41 (23-11-4) regular season games -- plus 11 more (5-6) in the playoffs -- and ranked third in the league among qualified starters with his .925 overall save percentage during the regular season.

His 52 combined games were a career high in the NHL and his second-largest workload as a pro behind 69 total games for AHL Worcester back in 2008-09.

At least for this season, he showed no real weaknesses or holes in his game. He was simply solid in all areas, combining for totals that were better than league average.

In 41 games he had 59.5% quality starts (a metric developed by Rob Vollman), which is well better than league average and just short of very good. In the playoffs he had six quality starts by that metric, again not great but not awful.

So what to think of the future? Goalies are notoriously hard to assess, "career backups" even moreso given limited samples to what are already limited stats. But Greiss's 5-on-5 save percentage has been better than average for most of his seasons for which there is data:

That's from stats.hockeyanalysis.com, which shows his performance against the seven-year (2007-14) league average. (Only seasons of more than 250 minutes are recorded, which is why he has a gap in the 2013 lockout year.

Greiss is 30, seven months younger than Halak, with a good albeit untested health history. He held up fine with regular starts down the stretch, but next year could be a different matter if he's getting close to 60 starts and if Jean-Francois Berube, an assumed backup at this point, falters like Chad Johnson before him.

But those are the X factors moving forward: Durability and performance with a workload that could increase by 50 percent, with a side of annual goalie variability.

Resurrecting a report card tradition: Depicting the players in lyric, haiku or verse. Feel free to play along in comments:

After conceding goals, some goalies look rattled, some look focused, some look upset, some look determined to shake it off. Greiss always looks...annoyed. That lift of the mask and turn over his shoulder to look at the scoreboard/replay with a slight scowl...it captures the spirit of the thing.

Here's the report card drill: Please grade the player in the poll relative to his potential and your expectations for him coming into the season. (i.e. Don't just give lesser players low grades and more talented players high grades; grade them on a curve based on their role and what you expected out of them.)