Anthony Beauvillier was already a promising prospect entering the 2015 NHL entry draft. Coming off a 42-goal season in the QMJHL, he was perhaps just as well known for his speed and intensity as his scoring. According to this Hockey Writers article by Chistropher Ralph:

"Beauvillier is a slightly undersized offensive, intelligent forward who is tenacious and ultracompetitive. He is shifty quick, has a low centre of gravity and solid on his skates. With his speed and puck-rushing mentality he is an offensive weapon who prefers to shoot first and ask questions later. He is also very effective in the faceoff circle. His play away from the puck is to be commended as when his team is without it, he’ll do everything in his power to retrieve it."

The main concern appeared to be Beauvillier's lack of size. He is listed at 5'10", 173 lbs., and very well may be the smallest forward on the Islanders' roster should he make the jump in the next couple years. (Shane Prince is listed at 5'11", 185.) That concern likely played a big part in Beauvillier dropping to the late first round, when the Islanders packaged the 33rd overall pick (obtained in Griffin Reinhart trade that same day) and the 72nd overall pick (originally Florida's pick) to the Tampa Bay Lightning to land Beauvillier at 28th overall.

Despite the NHL cracking down on obstruction in recent seasons to enable smaller players to succeed, size still plays a significant role in the NHL. Beauvillier was ranked 38th by NHL Central Scouting, 40th by The Hockey Writers War Room, and even as low as 43rd by TSN's Bob McKenzie. However, TSN's Craig Button saw more value in the Q forward before the draft, ranking him 18th among draft-eligible players. In February, after Beauvillier's torrid start to the season, Button even ranked the Cataractes forward 40th in his top-50 NHL-affiliated prospects article, amongst many talented players in the 25-50 range (Honka 26th, Barzal 28th, Konecny 29th, Point 30th, Matt Murray 31st, Fiala 35th, Barbashev 48th, and Dal Colle 49th, for example).

One measurement I value for junior hockey prospects is even-strength goals per-game, relative to one's age. It seems to be a better forecasting tool for future NHL success than goals per-game, due to a variety of factors. Here is Beauvillier's EV goals rate relative to age, compared to other players who finished top-20 in the QMJHL's regular season in points-per-game: 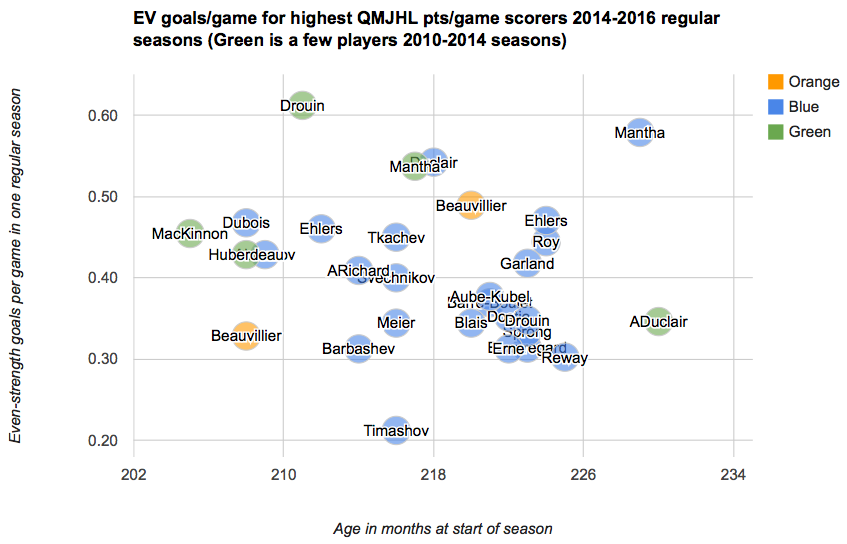 Beauvillier's EV goals pace rose very significantly, from 0.33 to 0.49, compared to his 2014-15 season. (He did score 42 goals in his pre-draft season, but 20 of them were with special teams.) In doing so, he effectively jumped over Nikolaj Ehlers in goals production while significantly closing the gap on similar-aged campaigns by the other Anthonys: Duclair and Mantha.

Notice that both Drouin and Duclair suffered a significant downturn in production in their finals seasons in the QMJHL. Duclair's could very well be mostly due to sample size, as his last spell only spanned 26 games.

How about total goals rate? Beauvillier did score 15 power play and two shorthanded goals. Shouldn't he be credited with those in some measurement of his season? Yes, I think so. While EV goals seems to be a better forecasting stat for NHL success, we shouldn't simply ignore PP and SH goals. 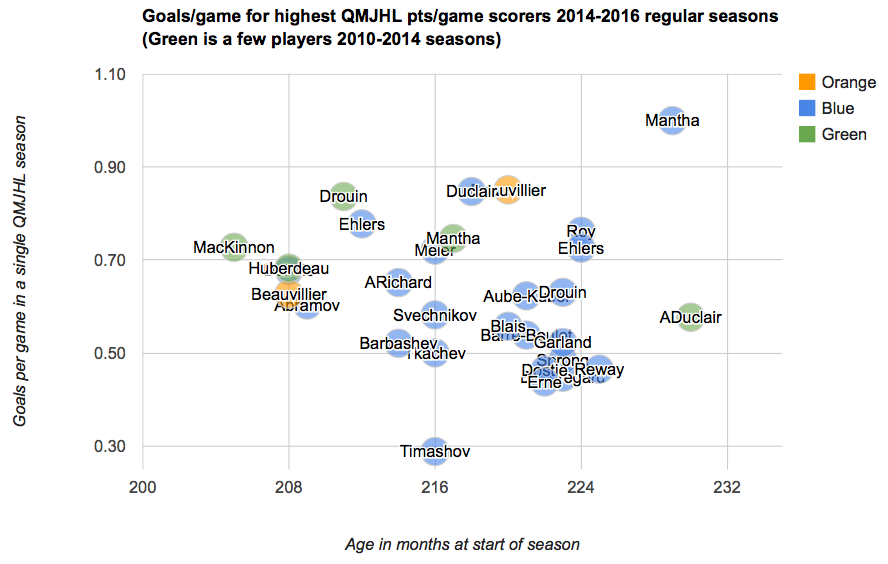 And here is simply points per game, below. Conor Garland was chosen 123rd in the 2015 draft by AZA after putting up 129 pts in 67 games. This season he had a modest increase with 128 pts in 62 games. He is 5'8" and was ranked 22nd in TSN's top-50 prospects in February, ahead of Barzal. Notice that everyone above the 1.50 line is a very significant NHL prospect/player. 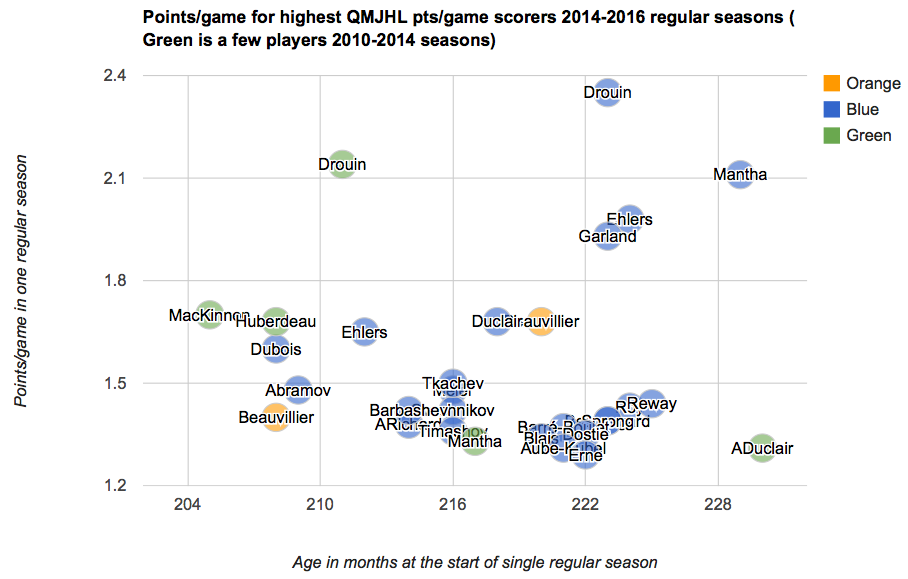 Beauvillier will have difficulty cracking the Islanders' roster for the 2016-17 season, since Isles are reluctant to bring players into the NHL with no AHL safety net, and are likely to have a lot of forward depth (thanks in part to late-season performances by Quine and Prince) next season. Beauvillier will pretty much have to prove in camp that he will be at least as useful to the Islanders next season as Barzal will be, which is no small task. In the mean time Beauvillier is proving that he is no small prospect.