If you were looking for an article to increase your confidence that the NY Islanders will beat the Florida Panthers in the 2016 NHL Playoffs, unfortunately you'll have to look elsewhere. Using my Weighted SC SAT metric, I estimate the Isles' chances to beat the Panthers to be just under 40%.

Note: Weighted SC SAT is just a team's scoring chance attempts weighted by chance of scoring (e.g. an attempt crossing the Royal Road is more dangerous than an attempt that doesn't). All the data from this season is right here.

Now that may be unfair since these teams only played 3 times this season, but the Isles' chances to beat any team in a best-of-7 series is 44% using this metric. That number was determined using the Isles' season-long Weighted SC SAT% of 47.3%. Now that the band-aid has been ripped off, what are some key things the Isles can do to increase their chances against the Panthers?

No seriously, the Islanders' Weighted SC SAT% is 3.8% better when Marek is in the lineup. He also led NYI defensemen in Expected Points/60 with a 25% lead over the next d-man, Thomas Hickey. If that's surprising to you like it was to me, the results actually bore themselves out in real life.

In 705 minutes this season, Marek finished with an on-ice Weighted SC SAT% of 54.7% which is +9.2% relative to the team. I think we found our new silver fox. What makes him so good? See below: 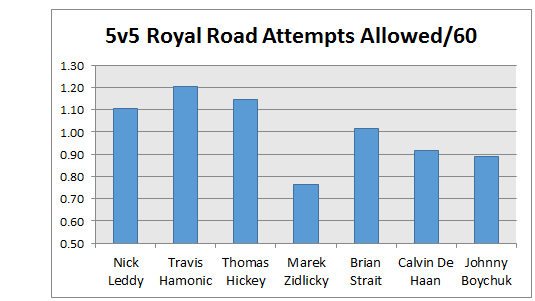 Ignoring Zidlicky, Johnny Boychuk and Calvin de Haan also do a pretty good job limiting the opponent's Royal Road attempts. This will be crucial for all five skaters to keep in mind in a best-of-7 series. (Note: The jury is still out on Ryan Pulock since he's only played 15 games this season, but his on-ice Weighted SC SAT% was an amazing 56.0%!) If you're unsure of what a Royal Road attempt is, you can check out two recent examples: Jason Garrison's goal and Nick Cousins' goal.

If the Isles are going to be successful this postseason, they obviously need their best player to play like it. It's no secret that John Tavares has seen a revolving door of players on the top line the past 82 games. This is a common criticism of Jack Capuano: that he goes to the "line blender" too often to snap his team out of an offensive funk. Well if the Islanders start this postseason in a funk, things will go south very quickly. So which forwards should join John Tavares on the top line? See below:

Counting SC attempts and primary assists involving John Tavares and adjusting for TOI differences, we see that John should be playing with Mikhail Grabovski and Ryan Strome. (Get better soon Anders.) Using the amazing SuperWOWY tool on puckalytics.com, we can see this trio was on the ice for 10 goals for and 5 against, 190 SAT for and 143 SAT against, and shot over 10%, albeit only for 160 5v5 minutes. This isn't difficult stuff; this should be the top line in Game 1!

Now that the top line is taken care of, the following are the defensive pairings from our best 5 offensive showings this season according to Weighted SC SAT:

To visualize this better, you can see the colour-coded version here.

Still confused? Basically, Leddy can be matched up with anyone on the top pair (might as well be Johnny Boychuk), Thomas Hickey and Marek Zidlicky make a solid duo, and Calvin de Haan is also versatile (I actually prefer Ryan Pulock over Travis Hamonic here). If you ask me, my lines are Leddy-Boychuk, Hickey-Zidlicky, and de Haan-Pulock. That's if you're trying to maximize offensive output from the defense. 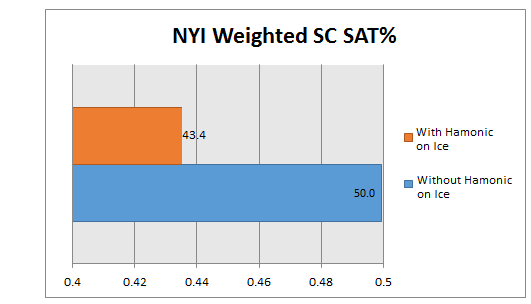 Maybe this decline in performance is a result of injuries, and maybe it has to do with his family situation back home. Obviously we don't want to speculate about that, but if the Isles were to deal him this offseason, they'll likely get a return that's worth more than what he's currently providing the team. And that's the painful truth.

If the Isles are going to beat the Florida Panthers or any playoff team for that matter, they have to...

Once the playoffs are wrapped up, I plan to write articles on the offense, defense, and goaltending from this past season.

Which point do you most disagree with?