The New York Islanders have had a somewhat puzzling season. They are 7 points back from where they were at this point last year, -1.9% in GF%, and -3.3% in CF%, yet they essentially returned the same group of skaters. (Okay so they swapped out Marek Zidlicky for Lubomir Visnovsky and Thomas Greiss for Chad Johnson but those aren't exactly game-breaking moves.)

On the positive side, they are 4th in the conference and 8th in the league, they've given up 10 less even-strength goals than at this point last year, and John Tavares hasn't even found his usual gear. With a little luck, we should have more exciting games still to come.

A Quick Note on Tracking Methods

If you're a fan of passing stats and my Weighted SAT series, you may be wondering where the articles have been this season. The easy answer is that I've been busier than I was last year (apparently your second year of work is exponentially busier than your first), but a longer and more accurate answer is that I've changed how I track. I haven't made it more time consuming; on the contrary, I decreased the number of events I track and thus had to wait longer for a large enough sample size to report on.

So what changed? After I noticed it's very difficult for a team to have a meaningful advantage over their opponents in expected goals from "harmless" shot attempts, I cut them from my tracking. So when you see Calvin de Haan throw the puck at the net two feet away from the blue line, you know now I don't record that. After 44 games last year, the Islanders were exactly even with their opponents in expected goals from harmless shot attempts. Additionally, Weighted SAT% correlated 0.98 with Weighted SC SAT% - even though there's about 6 times as much data in Weighted SAT%. Now I'm only recording (and weighting) scoring chances which fall into 6 categories: deflections, breakaways, SC alone, SC + one-timer, SC + Royal road, SC + one-timer + Royal road. Now when I refer to Weighted SAT%, it should really be called Weighted SC SAT%, or expected Goals For% of a team or player after weighting the scoring chance attempts they take vs. give up. (Trust me, if you were able to follow that, my methods are very close to what people who don't like SAT or Corsi are calling for.)

You may be asking why should I care about this stat, or if a player was good in Weighted SAT% last year, is he still good this year? You should care because through 46 games this year, Weighted SAT% has 0.49 correlation with GF% on a game-by-game basis (in games with a least seven SC attempts). SAT% is at -0.04 during this timeframe, SAT% Close is 0.08, and SCF% Close is at 0.12. So 0.49 correlation is a considerable improvement over those metrics. Additionally, the winner of the Weighted SAT% battle agreed with the even-strength winner 74% of the time, excluding ties (25-9-9).

Finally, an individual player's Weighted SAT% Rel correlated 0.66 between last season and this season. That number is as important as the 0.49 correlation with GF% because it shows this is measuring something repeatable. You can expect Ryan Strome and Anders Lee to stay positive in this stat, while Cal Clutterbuck and Casey Cizikas...not so much.

Alright, let's get on with it!

The NYI forwards haven't changed much from 2014-15. In fact, the 12 forwards who led the team in TOI last year are the same 12 forwards this year. You should be able to name them in your sleep. But do you really know who is driving quality possession, and not just puck possession? See below and note these numbers (except for Weighted SC SAT%) are per-60:

You can see above that Nikolay Kulemin has been a monster in Weighted SC SAT%. He's been doing this despite average offensive numbers with his stellar defense. In fact, he's 25% better at limiting his opponent's weighted scoring chances than the next best Isles forward, Cal Clutterbuck. The defensive prowesses of Kulemin and Clutterbuck are similar to last season when they were ranked 3rd and 1st respectively.

Without weighting, Kulemin has been on the ice for 68 Islander scoring chances and 52 opponent scoring chances. (Remember that I only track attempts that were preceded by passes, so don't think about rebounds, turnovers, or random events here.) Kulemin is very in control of this number, and it's a big reason why he's plus-6 on the season. Don't be fooled by his pedestrian SAT Against/60.

For the more offensive forwards, we see the usual suspects here (and some surprises). Ryan Strome and Josh Bailey are again at the front of the pack in terms of passing, but Casey Cizikas joins them as well. Last year, Casey was 7th in passing among qualifying forwards, but he's ramped up his game a lot and is now tied for third, with John Tavares, no less. In terms of goal scoring, or dangerous shot taking, Anders Lee again is the class of the forwards. It's sad to see this hasn't translated to his actual numbers, but my money's on Anders scoring at least 10 goals in the final 36 games.

Below is a table of the forwards sorted by 5v5 goals this season, broken into untracked vs. tracked goals: 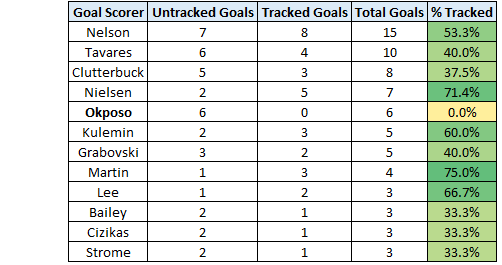 Now what does this mean? It means that Okposo hasn't scored a 5v5 goal this season in the SC area from the pass of a teammate. That is not good if the Islanders are banking on him scoring at a consistent pace the remainder of the season. His six 5v5 goals have been unassisted, a random bounce off an opponent, from a defensive turnover, from a rebound, or right at the end of the powerplay. Yowza.

That's not to say he's been extremely lucky this season. From the first table in this post, you can see he's 7th of out of 12 forwards in Predicted Goals/60 so he probably deserves to have some tracked goals, but it's pretty remarkable that in 650+ minutes of 5v5 hockey, he hasn't scored from a teammate's pass in a dangerous area. Good thing he's 80th in the league in PP Pts/60, but currently I don't think the Isles should shell huge money for him this offseason.

Later this week, I hope to analyze the defensemen and then the team as a whole. Let me know if you have any ideas of what you'd like to see analyzed more in depth in the comments, or any remaining reservations you have around this. Here's the data if you're interested. Thanks for reading!