Another assist for me, Johnny! - Brad Penner-USA TODAY Sports

I'm hoping you already feel positively about Weighted SAT, or the idea of weighting shot attempts by chance of scoring, because this will further cement your feelings. If you're still skeptical of Weighted SAT (as one should be with any new statistic), I'm hoping I can turn the tide with this article. If you're new to this stat and need a quick primer, please click here.

Note: This metric is mentioned in Rob Vollman's '2015 Hockey Abstract Update' as Weighted PSAT but it's essentially one in the same. Ryan Stimson, the founder of the Passing Project, developed a similar metric with 26 shot types but the correlation between these metrics is roughly 0.95.

Anyway, if you've been dying to see what would happen to Weighted SAT% Close's correlation with Goals For% with more teams than just the Isles, see below:

And that's not fuzzy math. That's its correlation for 229 games featuring every NHL team - though the Islanders, Devils, Rangers, Capitals, Blackhawks, and Panthers are the most featured. So Weighted SAT% beats the two leading metrics, Scoring Chance For % and Shot Attempts %, rather handily. You can also see this in graphical form here. I'd like to thank those who helped track this past season because this wouldn't be possible without them.

Now that's some exciting stuff and were it not so damn hard to track, I fully believe Weighted SAT would replace SAT as the leading metric to evaluate players. Here is Weighted SAT% Rel's in-season repeatability. Nevertheless, read on to see what we can learn about the players of the Isles, Devils, Rangers, Blackhawks, Panthers, and Capitals.
Conventional Stats
G/60: Now I won't bore you with the Expected Goals/60 table as it aligns rather closely with the actual Goals/60 results from January 8th to April 11th. These are the players who took a lot of dangerous attempts (think Royal Road, scoring chance, one-timer, etc). The leaders here are Martin St. Louis and Rick Nash, followed by Brandon Saad, Marian Hossa, Alex Ovechkin, and Chris Kreider. John Tavares comes in 9th and Anders Lee, 11th. The worst forwards in this stat were Jesper Fast and Scottie Upshall, and the best goal scoring defensman was Mike Green. To see the top 20, click here.
A/60: Below is a more interesting table showing expected assists per 60. More interesting because it strips the randomness of teammates' shooting skill from the passer's stats. For example, you wouldn't expect Scott Gomez to be so high here when in reality he was 22nd of 53 qualifying players. Is it Scott's fault the Devils were 20th in the league in shooting percentage? No and his assist number shouldn't take a hit because of that. Oh how I wish the Isles would sign Gomez to a 1-year, $1 million contract. It's nice to see JT, Bailey, and Strome towards the top here, as many would agree they are the team's best passers.

Basically read this as: these players were most responsible for setting up their teammates in dangerous situations regardless of their finishing ability. For fun, the worst passing forwards were Tanner Glass and Derek Mackenzie, and the best passing defenseman was Keith Yandle.
P/60: Again total points per 60 is a bit boring, but the leaders here are Marian Hossa, Martin St. Louis, Rick Nash, Chris Kreider, Jonathan Toews, Marcus Johansson, and John Tavares. Bailey (14th) and Strome (19th) are the next Isles on this list. Unsurprisingly Tanner Glass was the worst forward at point production, while Mike Green was the best offensive defenseman.
Advanced advanced stats
Weighted SAT% Rel: This metric is a player's Weighted SAT% - his Weighted SAT% Off. Essentially these players give their team an edge in shot quality simply by being on the ice. The leaders in this category are: 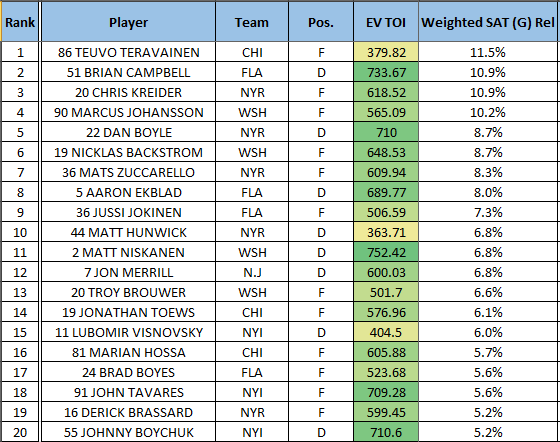 While Teuvo's sample size may be small (379 minutes), those who watch him play don't have enough superlatives to describe how solid he is. In fact, Ryan Stimson wrote an article on thecommittedindian on July 27 looking at these same statistics to describe Teuvo.

The biggest head-scratcher in the WSAT% Rel table is probably Dan Boyle, especially since we've heard how old, slow, and lucky the Isles were for not signing him, but his advanced stats from last season were solid. So I guess the lesson here is don't let the fickleness of Rangers fans get you down.

A couple weeks ago, acclaimed LHH poster, North Dakota Red Eagle, noticed that Derek Stepan was consistently at the bottom of the Rangers rankings in CA/60 but was consistently at the top of the team's on-ice save percentage. How was he doing that? Well the anti-stats crowd was right here: not all shot attempts are created equal. In the table below we see the Stepan is towards the top in WSAT% minus SAT%, which attempts to illustrate the players treated poorly by the possession metric. 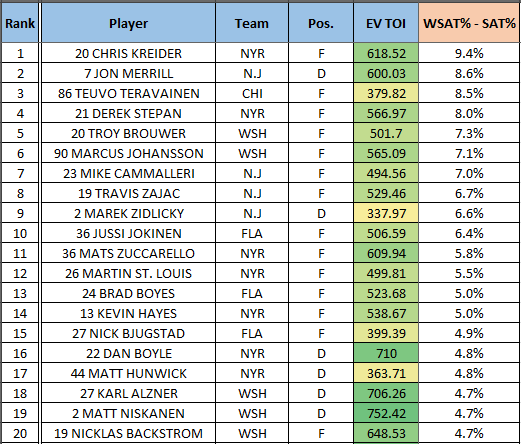 Now the table above isn't showing who the best players are, but who the players are that you may have judged a little too quickly. For instance, Jon Merrill. Now by no means is he the flashiest defenseman but when his SAT% says 44.8% and his Weighted SAT% says 53.3%, there's something that Corsi isn't catching. This is where the value of Weighted SAT% comes into play. There are market inefficiencies that the League isn't seeing and the first team to figure out who truly drives play (or scores goals) will have the upper hand.

Somewhat surprisingly Tanner Glass found a way to be last in this again. His SAT% was 42.6% but his Weighted SAT% was 32.9%. How in the world did this guy play 66 games last year?

Alright, one final table which I won't bore you of my interpretation of: 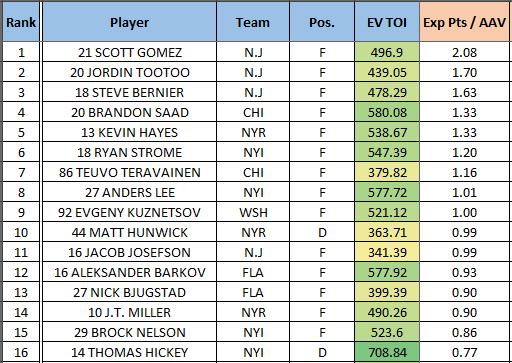 I'm confident to say that if these stats correlate well with 2016 results the shot quality debate can successfully be put to rest. And if it fails, I can be happy knowing I at least breathed new life into the debate.

If you want to see the full results of a particular stat or have your own idea of what you'd like to see, please let me know in the comments below. Thanks for reading!

Links to past articles:

Would you be interested in Scott Gomez for a cheap, one-year contract?