Who wants pie: Visualizing the Islanders' salary cap structure for next season and beyond

The days of infinite cap space are over for the Islanders. Let's take a look at who's making what and see how nice each player's slice is.

Share All sharing options for: Who wants pie: Visualizing the Islanders' salary cap structure for next season and beyond

For years, the Islanders and the NHL salary cap had a distant, almost adversarial relationship. The team spent so little on players that hitting the cap seemed like something only our grandchildren would experience.

Don't look now but the Islanders are a for real NHL team these days and they (and us) have to navigate a suddenly shrinking amount of cap space with many tough decisions to make on who to keep and who to part ways with.

Inspired by posts like this at Broad Street Hockey, I exchanged some Batman: Arkham Knight time for spreadsheet time and wrote up some charts detailing who's making what and how much of the owners' money Garth Snow has to play with.

A few notes before the charts:

Okay, on to the pies. 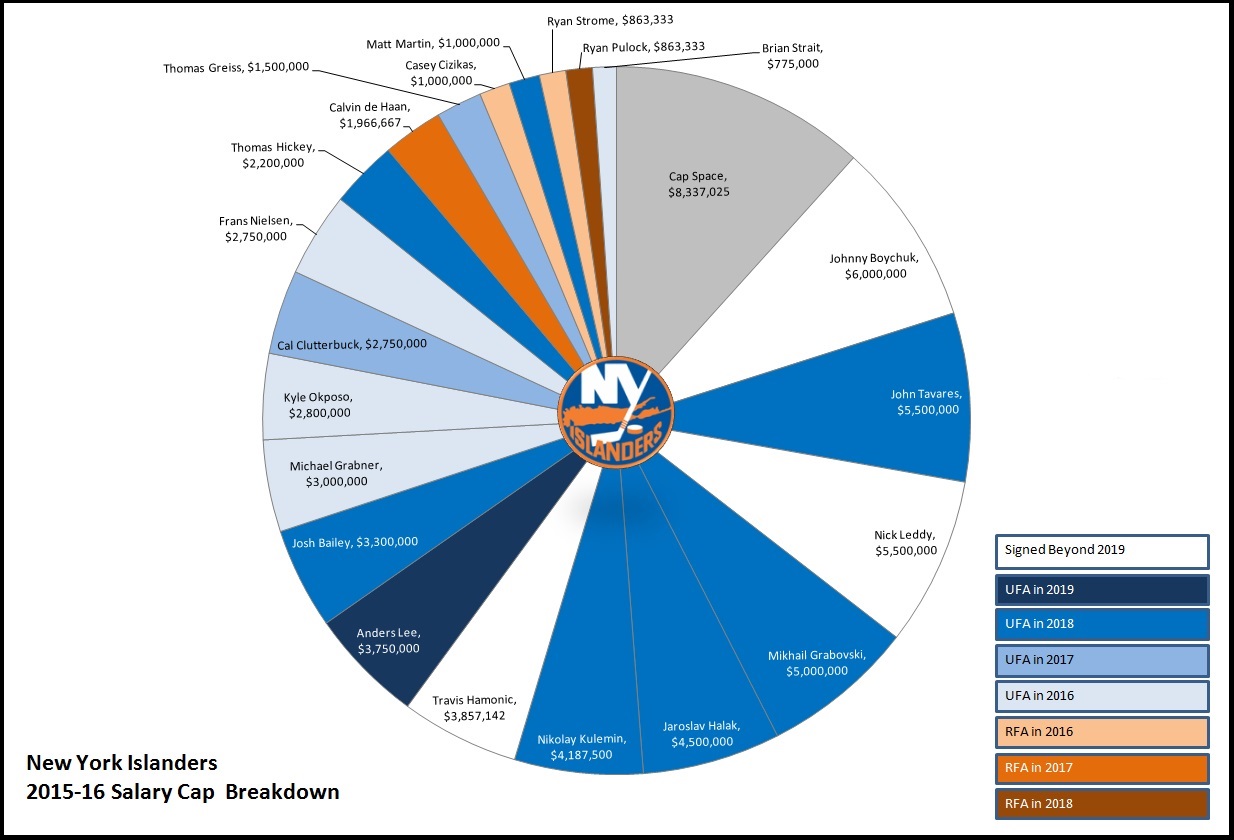 Observations in no particular order:

The next section looks at the distribution of salary cap space and some key balances the Islanders are looking to strike.

Snow has managed to distribute his money in a pretty balanced way. Boychuk and Nick Leddy fill up a good portion of the defense spending, and Halak is 4/5 of the goalie slice. But it seems fair to spend half of your money on forwards. I found this remarkable in its unremarkableness.

UPDATE! (see, I told you I probably missed something. I found a mistake in this chart and uploaded a new pic. Apologies.)

Peace! The Islanders are getting good value out of younger players on team-friendly contracts and aren't spending too much on guys closer to the end of their careers than the beginning. The 25-30 group includes the aforementioned Grabner and Okposo, as well as Josh Bailey and Cal Clutterbuck, productive players whose usefulness and worth will need to be harshly evaluated soon.

For Whom The Cap Tolls

In a salary cap league, no one is immune to the ceiling.

The Blackhawks just won their third Stanley Cup in the last five years and a few weeks later lost talented RFA Brandon Saad, valuable forward Patrick Sharp and solid defenseman Johnny Oduya because they couldn't fit them all under their cap.

If the Lightning want to get back to the Final, they're going to have to operate with a tighter wallet. If the Sharks want to fix what went wrong last season, they don't have a lot of dough to work with right now. The Rangers are up against it, but will probably find a way to wiggle into some room somehow (dammit). The Flyers are eternally trapped in "salary cap hell" and now don't have the results to justify it.

The Islanders find themselves on the precipice of unknown territory. Where they allocate their remaining cap space will say a lot about how the team wants to operate after they move into Barclays Center. Being right up against the cap isn't a death sentence, but it does make things exponentially more difficult for Snow to do what he needs to do to keep the team competitive in the Metro Division.

So far, he's done a good job of building a talented team with a healthy slice of breathing room. It only gets tougher as time marches on.