An analytical breakdown of the recent performance of Frans Nielsen and where he should fit in the Islanders' plans going forward.

Frans Nielsen is a legend around these parts, and for good reason. The last remaining Milbury draft pick on the Islanders' roster, Nielsen was a massively underrated gem at the start of his career. Now, age 31, he is coming up on another contract year and his future with the Isles is arguably in doubt. Is Frans still as good as he once was, on inferior teams? Let's take a look.

Frans Nielsen's reputation as a defensive center was well earned in his first few years with the Islanders. Take a look at the chart below - Courtesy of the amazing Muneeb Alam of Japers Rink - , which shows the rolling 20 game Islanders' Corsi/SAT with and without Nielsen since 07-08.  (A "Rolling 20 game average" basically means the chart is showing what happened in the past 20 games at each point in time.) 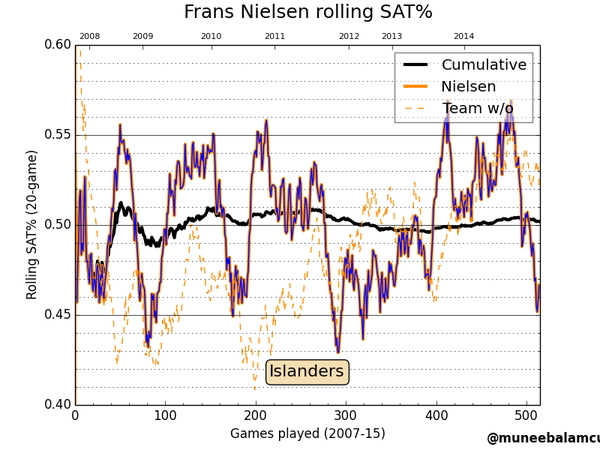 The Isles were badly outshot for nearly all of Nielsen's first four years...except when he was on the ice.

After an early bump to start his career, Frans Nielsen put up corsi/SAT percentages 50% or greater for most of his first 300 games played with the Islanders, up to the 2011-2012 season. Even when he fell below 50%, Frans was well ahead of the rest of the team, who were generally pretty awful at possession.

After an early bump to start his career, Frans Nielsen put up corsi/SAT percentages 50% or greater for most of his first 300 games played with the Islanders, up to the 2011-2012 season. Even when he fell below 50%, Frans was well ahead of the rest of the team, who were generally pretty awful at possession.

To put it in basic terms - the Islanders were badly being outshot for nearly all of Frans' first 4 years with the team, but when Frans was on the ice, usually in defensive minutes, the Islanders were usually outshooting the opponents. That's an incredible feat.

Then the lockout season happened.

You can see it on the graph (year marked "2012" up top, or around the 300 game mark), but suddenly Frans was being greatly outshot while the team.....was actually doing well without him.  Frans got better near the end of the season, but not still never surpassed the rest of the team.  Some of that may have been the other centers getting better, but one would've expected Frans to have #s at least close to that of Aucoin and Tavares in terms of possession.

This trend seemingly reversed itself for part of 2013/14, the latter part of the season, but this last season Frans has basically been around team average until the last 20 or so games, when he again fell below average.

So What Does This Mean?

Well, Frans Nielsen is 31. The typical NHL player peaks around age 25. In short, Frans is at the age when it is fairly typical for a player to decline. And the numbers show such a decline. He's just not the same player as he was -- he was once a very good, if not elite defensive forward, capable of driving play forward even on teams that were being outshot otherwise.

Now, at best he seems to be average, and there's definitely evidence suggesting he's relying upon better linemates to be playing well (Grabovski and Strome, to name two this season). Frans' role hasn't changed; his performance certainly has.

My own neutral zone tracking reveals where some of this is: Over the last 2.5 years (Haven't finished this season yet), Frans has been a seemingly elite neutral zone player, incredibly good at denying opponents the ability to carry the puck into the Isles' zone.  What HAS been poor has been his performance in the other two zones - in the lockout year, he was poor about driving shots in the offensive zone and in the last year and a half, he's been poor at denying shots once the puck has gotten into the defensive zone.

Now this raises some other questions - research strongly suggests that individual offensive and defensive zone performance #s (as measured via neutral zone tracking) are highly variable and subject to a LOT of variance and are not really a showing of repeatable skill.  In other words, it's certainly possible that Frans' dropoff is just an extreme amount of bad luck (Yes over 2.5 years - this DOES happen).  On the other hand, Frans is 31, such that even if he does regress positively, he's probably not going to get back to the high levels he was before.

In short, the resigning of Frans Nielsen seems a very questionable decision for the Isles to take. Frans still maintains an excellent defensive reputation and has come off two solid point scoring seasons, but his actual underlying numbers aren't really matching that reputation anymore. The case for a trade seems pretty strong.

Should the Islanders not trade Nielsen this offseason, which is probably the most likely outcome, they'll be hoping for regression in the offensive and defensive zones to occur to ensure Nielsen returns to being a solid defensive forward.  The odds aren't bad of that happening, and its not like the Isles couldn't use the forward depth (and his scoring is great for a 3rd liner, solid for a 2nd).  Still it seems like a missed opportunity long term, especially with the Isles' other depth at center.