The 2014-2015 season was the last one at Nassau Coliseum, and I'm sure Lighthouse Hockey has plenty of reminiscing still going on. So for my first fanpost here in the community, I want to talk about a couple of the most important games I ever attended. Admittedly, this is a short list because although I've been an Islander fan for most of the 25 years I've been alive, most of those seasons weren't up to par. Nonetheless, there were still some fun games to be attended... 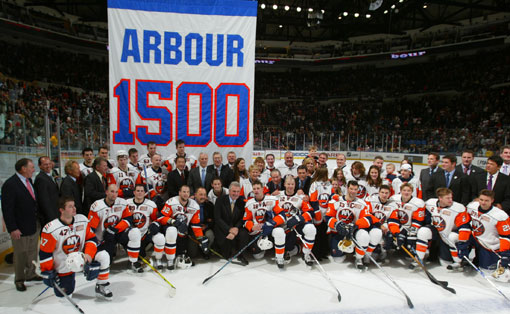 Our Islanders season tickets were in a righteous location--section 116 I think, almost dead center, only a few rows up from the visitors bench. Ted Nolan was head coach at the time, and the leading goal scorer for the hockey team I had rooted for my entire life was Billy Guerin, with 23 for the whole season. Not exactly rewriting the record books!

These weren't golden years for my team. Even so, the most important game I had ever witnessed at the Coliseum during my young life would take place during that 2007-2008 season.

We had 2 seats, but my dad couldn't go, so my high school friend went with me instead. We had both just started college, and I made one of my first trips home from school to catch this game.

My dad explained the significance of this game: the legendary Al Arbour was guest-coaching what would be his final Islanders game. The second-winningest coach in NHL history had 1,499 games under his belt. This would be 1,500--an astounding figure.

An Isles fan since the very beginning, my dad impressed upon me, "Make sure you take a good look at that man. It's a different team when he's behind the bench. It didn't even feel right not seeing him stand there when he left!"

When my friend and I settled into those great seats, I did just that: peer down towards the ice at "that man." Silver-gray hair, suit and tie, thick glasses. Al Arbour had a regal air, and even the visiting team had to have felt it.

The Pittsburgh Penguins were the most fearsome team in the East. But the Islanders always seemed to play well against them, no matter how dangerous Crosby, Malkin and company were on paper. Nassau Coliseum (which had yet to get the nickname "The Old Barn") crackled with what felt like old-school energy as the home team skated out to "Baba O'Riley" ("Yoouuurrrrr.....NEW......YORK.....ISLANDUUURRRRRRZZZZZZ!!!!!").

The strong, Arbour-inspired play was not forthcoming at first. Rick DiPietro surrendered early goals to Malkin and Crosby, and the Pens jumped out to a 2-0 lead early.

"I don't know much about hockey, but I'm thinking this guy should have the rest of the night off," my friend remarked, adopting the starting-pitcher approach from baseball. I shook my head and fumed in silence. The Isles offense was struggling to break through against Marc-Andre Fleury (remember, it wasn't playoffs!).

And the Pens were playing dirty. Several penalties were called, including a 4-minute one on Crosby. Onebrutal hit after another, the fans (maybe the players too) were getting pissed off. The final straw came when someone (may have been Crosby, I don't remember), plowed straight into DP, forcing him to leave the game and put Wade "Dubie" Dubielewicz in his place. The thundering chants poured down from the Coliseum seats: "ASS-HOOOOOOLE! ASS-HOOOOOLE! ASS-HOOOOOOLE!"

As my parents used to say when they were angry with me: "That did it."

Either the fury had reached breakout levels or Arbour had said something awesome to the bench, because from then on out the Isles played like a different, better team. Dubielewicz made a bunch of big saves (dun-DUN, "Du-BIE!", dun-DUN, "Du-BIE!"), and Trent Hunter (remember him?) put us on the board.

And then, in the best all-around game I ever saw from him in an Isles uniform, Miroslav Satan (!) had 2 goals. Comeback win in regulation, no OT required. The place went bonkers with righteous noise. Some guy behind me was yelling, "Hail Satan!"

When the final horn sounded, the team joined Arbour out on the ice for a shower of confetti, and commemoration of a special banner: Arbour 1,500. A smaller version of that banner still hangs in my apartment. There the legend was, surrounded by a new team as though he had never left it. A huge standing ovation followed, and my hands were numb from clapping.

When I got home, I told my dad about how well the Islanders played, and how it was one of the most entertaining games I'd ever seen, and how I saw Al Arbour. He smiled as a I described the energy: "My son, I'm so glad you got to see that. That's the effect Al Arbour has....back then, it was like that every game day."