It's okay, you are still SO much better than the old guy. And the guy before that. And... - Geoff Burke-USA TODAY Sports

The idea to weight shot attempts based on categories (like one-timer, Royal Road, and scoring chances) came out of the passing project organized by Ryan Stimson. The thought is that true talent is most evident on attempts generated from passes because that gets away from the "slop" of hockey. Without tangible proof, we are posing that attempts off rebounds, unforced turnovers, and faceoffs are random events that cannot be counted for or against players. When restricting hockey to more controlled play, we see that the correlation with GF% increases from 0.23 (SAT% Close) to 0.37 (Weighted SAT% Close) so there might be something here.

Delving further into this, I will look at Islanders goalies (Halak), offensive and defensive efficiencies, and how context stats like zone starts affect Weighted SAT.

When the Islanders signed Jaroslav Halak in May 2014, the majority of the fans were ecstatic about the news, and rightfully so. The team hadn't had a competent netminder since Rick DiPietro's 2008 all-star season. In 2014-15, Halak set team records in consecutive wins (11), overall wins (38), and like DiPietro in 2008, was selected to the all-star team. In his one playoff series against the Washington Capitals, Halak posted a 0.926 save percentage, good enough for 3rd among all playoff goalies with at least 7 games played. 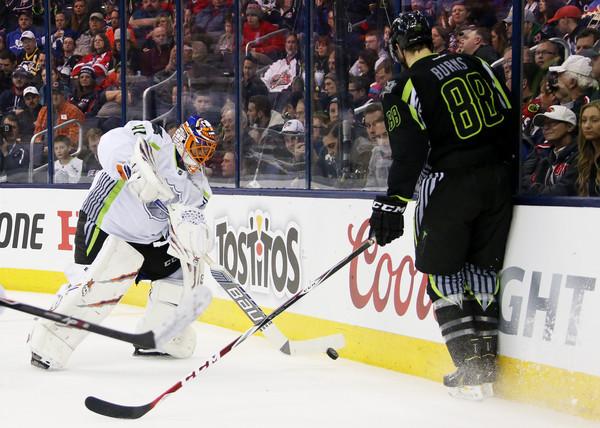 In typical Islander fan fashion, however, we must analyze everything before declaring something to be acceptable. Halak's 0.923 even strength save percentage (17th in the league) gave some fans pause. Why isn't he in the top half? Will he only get worse now that he's thirty?

The movement in the analytics community recently has been trending away from normal save percentage and toward expected and adjusted/danger save percentages. This stems from the thought that not all teams allow the same proportion of harmless, moderate, and dangerous shots, and we shouldn't evaluate goalies with that premise. While the above are steps in the right direction, they are entirely dependent on the NHL's RTSS data which has some warts. By diligently watching and categorizing every shot Halak has faced since January 4, 2015, I feel confident to provide my take.

Halak is rock solid on harmless attempts, weak on scoring chances, and prone to make bonehead plays. Unfortunately he likely won't be in the top half of the league next season again because of it. Please refer to the below, which you can click to enlarge:

You can see in the second box that Halak's 0.761 save percentage on scoring chances is below the 0.804 average that his fellow teammates and opponents allowed. The problem is the Islanders allow roughly 4.4 of these types of shots per game, meaning Halak allowed an additional 0.19 goals per game, which is 11.2 goals over the season. Halak partially makes up for this in harmless attempts: his 0.978 save percentage against shots that weren't scoring chances was 0.004 above average and amounts to 2.7 goals saved per season. In total, he allowed ~8.5 goals above average last year in terms of shots from passes.

Despite having that late, soft goal in Philadelphia burned in your memory, Halak's real issues look something like this:

How do we get Halak to play better? Limit the opponents scoring chances by playing the optimal lineup. In games where 'He who shall not be named' did not play, the Islanders gave up 0.31 less scoring chances per game. That difference means another 0.77 goals saved per season, while the difference in non-SC shots means another 1 goal saved. So best case scenario, we can project Halak to allow 6.8 goals more than average in 2015-16 (about two standings points) in terms of shots from passes. The real number is probably around 10 when counting all shots, so let's just hope our backup goaltender is at least somewhat competent. 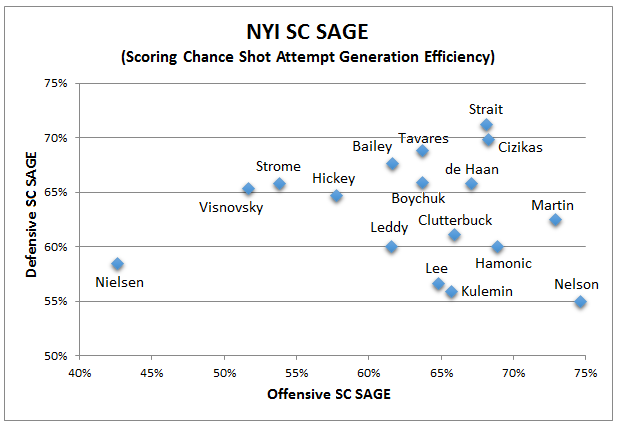 Is there something Nelson, Kulemin, Hamonic, etc. are doing better than the other forwards? Probably not. I ran a split-half correlation by randomly assigning each row in my spreadsheet either 0 or 1, then running the results for each value to see if they correlate. The offensive and defensive numbers each correlated -0.107 (in an eerie coincidence) while the difference between the two, SC SAGE Diff., correlated -0.027. Meaning these numbers are completely random and next season we could just as likely see Nelson at the top left of the graph. The same story was found for regular SAGE.

Since it's not likely that players can control the SAG efficiency of their entire team, I restricted it to just the events where the player was the shooter or primary passer and again found -0.02 correlation. Perhaps it's best not to look too into offensive or defensive efficiency much further, though it does paint an interesting picture of the past.

Finally, we'll see what effect zone starts, TOI of teammates, and TOI of competition have on Weighted SAT%. Perhaps Tavares' numbers are only great because he's often in the offensive zone, with great linemates, and against weak competition. Click here to see if this is the case. Note that teammate and competition numbers here are from war-on-ice.

Now if you're overwhelmed by the numbers of graphs, don't worry, I'll give a brief summary. For forwards, we see that zone starts have less of an effect on Weighted SAT (0.54) than SAT (0.68). For forwards like Kulemin and Nielsen, who were often in the defensive zone, this means they actually have a chance to come out positive relative to the team. Regarding competition, it seems the better a forward's Weighted SAT, the better competition he'll likely face. This is obvious but it actually serves as a better predictor of competition than SAT alone (0.72 vs. 0.67). Finally, regarding teammates, Weighted SAT was less affected than SAT (0.59 to 0.68), which is another great sign. It doesn't take great teammates to have great Weighted SAT.

For defense, the picture changes a bit. Again the Weighted SAT numbers were less affected by zone starts (0.57 to 0.71) but the teammates and competition numbers take some interpretation. It seems that as a defenseman's Weighted SAT increases, his level of competition drops. This likely means that coaches care more about matching lines for forwards than the defensemen, and the correlation coefficient of -0.55 is similar to SAT's -0.60. I doubt Boychuk and Leddy's gaudy numbers were a result of facing lesser competition. Likewise, as a d-man's Weighted SAT increases his quality of teammates decreases, and this is more pronounced than SAT (-0.44 vs. -0.28). Perhaps this means Cappy was using Boychuk, Leddy, Hamonic, etc. to shield the weaker lines. I mean I don't think anyone in their right mind wants to see Martin-Cizikas-Clutterbuck and Strait-Hickey.

The Isles' strength won't be in net in 2015-16, players have very little control over their passing efficiency, and context statistics explain SAT better than they do Weighted SAT.

If you have an idea of what you'd like to see next please sound off in the comments below.