If you saw my first post on Weighted Shot Attempts you may have noticed that WOWY analysis was the most requested item to be explored. 40% of you either selected this randomly or knew it would require the most work on my part; either way I wasn't thrilled.

And if you're skeptical of the value of Weighted SAT, I hear you and I understand. I'd like to apply the formula to more teams besides the Islanders and Devils but I'm waiting for the data to become public. In the meantime, just know that Weighted SAT% Close (0.37) outperformed SAT% Close (0.23) at predicting GF% over 44 Islanders games. Shoutout to vallay.

If you've never heard of WOWY analysis, please read the below:

WOWY (with you or without you) is an analysis that looks at how a player performs when playing with or not with his teammates. A WOWY analysis can tell you which players play well together, which players make their line mates better players, and which players are most valuable to a team.

Essentially, a WOWY Analysis tell us what we can expect a certain duo to do on the ice, and what we can expect when they're separated. This can help us tell which partner is more talented than another or which pairings are amazing/a total disaster when together. Usually this analysis is done with Corsi, or SAT%, but I applied this to Weighted SAT% to see if there's anything we can learn.

You can view the results through Microsoft OneDrive: link, or the table below (click to enlarge).

Please note that the bolded boxes are really the only ones worth looking at. They are where the duo had at least 300 shot attempts together and 300 without.

So what do we see?

Regarded as one of the best young defenseman in the game today, Islander fans are relatively split over how good Travis Hamonic actually is. There is reason for this: his SAT% Rel over the past 3 years stands at -1.2%, and he's never had more than 30 assists or 5 goals in a season. Isles fans know better than take these numbers at face value because for most his career he's been saddled with less than stellar d-partners. In fact, of the ~3400 minutes Travis spent on the ice the past three seasons, 47% was with either Andrew MacDonald or Brian Strait.

We see in the table above that Hamonic's Weighted SAT% with Strait was 47% the last half of the season. That can also be read as predicted Goals For% of 0.47. If the Islanders had that kind of GF% as a team this season, they would have fallen about 10 points shy of a playoff berth (see San Jose). Without Brian Strait, Hamonic had a Weighted SAT of 51%. This is nothing spectacular but likely good enough to make the playoffs (Detroit).

That 51% is not completely with his ideal partner either as Hamonic spent about a quarter of that remaining time with Thomas Hickey. So let's cut to the chase: the Hamonic-de Haan defensive pairing had a Weighted SAT% of 55%. How good is that? It's about the GF% of the St. Louis Blues; it's also the Weighted SAT% of Leddy and Boychuk. That's spectacular and means the Islanders potentially have two first-line pairs locked up for the foreseeable future, with Hamonic making around $4 million and Calvin de Haan becoming an RFA in 2017. You can see in the chart below that Hamonic's performance is much steadier alongside de Haan. 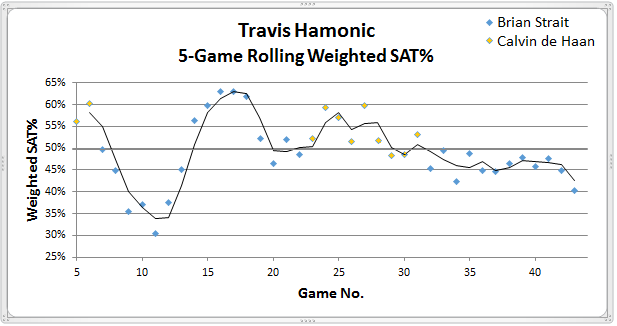 Bailey: With Tavares/Lee vs. Without

Ah, Josh Bailey, another point of relative contention among Islanders faithful. On one hand he's never had more than 16 goals or 41 points in a season, and on the other hand he's 70th in the league in points/60 the past three years, a definite first liner. You've heard of his defensive prowess but he's a career -30. So who is the real Josh Bailey?

Looking at his WOWY numbers, he appears to only be effective alongside John Tavares (55% with, 37% without) and Anders Lee (55% with, 49% without) though Bailey admittedly didn't spend much time away from JT at even-strength the last 44 games of the season - 144 minutes. Is this evidence then to start the FIRE BOSH JAILEY train? No.

As alluded to above, when the Bailey-JT-Lee line was on the ice last season, the Islanders had a Weighted SAT% of 55% which is pretty great. They were also lethal on offense, featuring the 2nd, 1st, and 5th best scorers on the team respectively. Now would it be nice to see Joshy succeed without Tavares? Sure, but the Captain has to be tired of the revolving door of forwards on his line and if the Isles seem to have found the right combination, they should roll with it. Anymore productive and JB will price himself right off the Island Brooklyn.

I won't say much about the fourth line besides their WOWY results aren't very pretty. Their Corsi/SAT was 50.6%, but their Weighted SAT was around 41%. Meaning: sure they were even with opponents in terms of blocked shots, missed shots, and shot on goal, but in terms of attempts from passes weighted by chance of scoring, they turned the Islanders into the Edmonton Oilers. I won't single out an individual player from that line (Casey, cough, cough) but something needs to change there.

In my opinion, the NY Islanders 2015-16 starting lineup should be: