The [phone company of some sort] Center does not have enough capacity for all the demons watching tonight's game.

The Washington Capitals host a Game 7 tonight and a good portion of their fans are filled with dread.

The New York Islanders have a chance to win a playoff series tonight for the first time in 22 years with their best squad in that span and, likewise, a good portion of their fans are filled with dread.

This doesn't make any sense, but it makes perfect sense.

You don't have to be a longtime fan of the St. Louis Blues to understand how a very good team on paper is no comfort for the darkest, often illogical fears of a fanbase because the worst things are always what end up happening anyway, so screw reason, screw paper, and screw Johann Gutenberg while we're at it.

Why Do They Get Stuff When We Don't Get Stuff? We Deserve Stuff.

That's how the Tampa Bay Lightning and Carolina Hurricanes -- less than a decade after abandoning Hartford and inadvertently creating a few more tortured Isles fans, no less -- have Stanley Cups, while since the early '80s the Capitals have been "that's a very good team over there" bridesmaids and the Islanders have been making payments on some kind of infinite balloon mortgage they took out for that nicely furnished dynasty.

So for tonight, when the Isles and Caps meet for a winner-takes-all chance to meet the nothing-goes-wrong Rangers in the next round, the trivial but somehow relevant history is this:

It doesn't matter that the Islanders have recovered, finally, from all those intervening years spent being tossed from disinterested to fraudulent ownership groups, amid the backdrop of a political setting that wouldn't even let the one owner who gave a damn build his own arena, and that's why this season is the "last call in Nassau" after all.

Islanders Have a History of History in Game 7 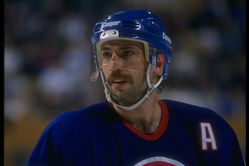 Islanders Game 7 history is filled with magic, misery and everything in between.

It doesn't matter that today's Capitals, as their coach* repeatedly points out, have nothing to do with almost all of those past Game 7 tragedies.

*That coach is in his first season with Washington after 15 years in Nashville, which has a similar star-struck playoff history, one that continued this year under Peter Laviolette, the guy behind the bench both for Carolina's Cup win and the Islanders' bad-luck Game 7 loss in 2002. We won't mention David Poile here. None of that means anything, except in the fan zeitgeist where the lifeblood and parasitic revenue of the NHL finds its gullible, resilient host.

The Islanders fanbase is an interesting mix defined by generations: Those who are old enough know a proud franchise -- producer of the best five-year run the NHL has ever known -- that happens to be on a bad 20-year (or more) slump. Younger ones know no postseason success but a few, once-in-a-generation riveting almost-rans like the electrifying Shawn Bates penalty shot goal that came in a series they lost. That latter group, generally, knows only torture.

Capitals fans, in contrast, know something that might as well be torture: The cruel tease of hope shattered by heartbreak. We don't have to go back to the Islanders-authored Easter Epic, where Pat LaFontaine's goal in the fourth OT ended Game 7 in Landover, Maryland. The cruel thing is that every generation of Capitals fan has experienced some kind of "Are you #$%ing kidding me?!" Game 7 disaster.

Just in the last few years -- before you even go back to Jaroslav Halak 2010 or Sidney Crosby 2009 -- you've got an abysmal 5-0 home loss to the Rangers (the #$%ing Rangers!) in 2013, and the year earlier the Game 7 demon was slayed in an dramatic OT win over the Bruins...only to suffer a close Game 7 loss at Madison Square Garden in the next round.

In the pre-Ovechkin era, history remembers 1998 as a Cup finals slaughter at the hands of the two-peat Red Wings, but hockey's evil game of coin flips will tell you that series was one Esa Tikkanen flub from being 1-1 headed back to Washington for Game 3.

What I'm saying is I have a sympathy for Capitals fans because I'll never forget how good their '80s squads were and I found it inhumane that there was a rotation of other teams (the Islanders, the Flyers, the Canadiens) taking turns reducing them to footnotes of history that only obscure bloggers remember.

Okay, that's not quite what I'm saying (but it is something I believe, and maybe it's something that's top of mind because I've watched the Blues do the same thing for {checks calendar} something like 40 years).

No, no sympathy for the devil here, not now. Just this: If you step back a bit and look at Game 7 with spectator rather than emotion-interwoven-into-my-soul glasses, tonight is really freaking fascinating.

None of that "baggage" history matters except to each team's fans. And once tonight is over with, none of it will matter to one set of fans, while the other will very much be stuck in that infinite emotional limbo that their franchise has foisted upon them.