Being one of the many Isles faithful who are befuddled by the (presumed) alarming frequency by which the Isles give up goals in the last minute of periods, I decided to check out just how often this actually happened this year. I simply rolled through each game's box score and recorded when each allowed goal occurred within each period (not including empty netters). The results were interesting -- if not pretty surprising.

Let's look at the first half of the year (first 41 games). The X-axis is the minute within a period (a goal scored at 0:47 would fall in the "0" column), while the Y-axis is the number of goals allowed. 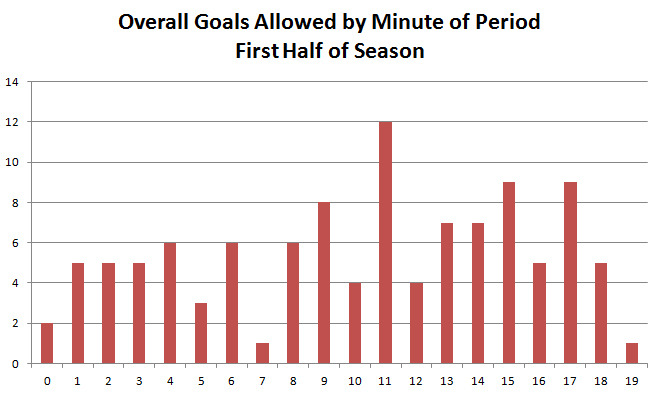 Goals Allowed per Minute of a Period, First Half of Season

A couple things jump out here. First, the Isles clearly allowed fewer goals in the earlier part of periods than they did from the 11-minute mark on. Second, look at that last minute -- they allowed only one goal in the last minute of any period (again, not including empty netters) the entire first half of the season!

Now for the final 41 games: 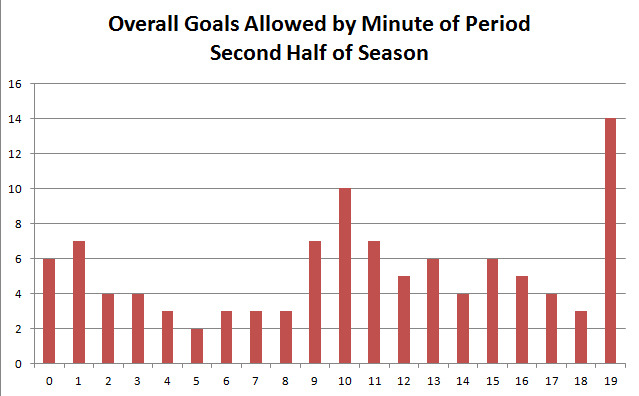 Goals Allowed per Minute of a Period, Second Half of Season

Whoa. What a difference. From giving up one last-minute goal in the first 41 games to 14 in the second 41. Pretty scary. Also, it's worth noting that, in general, the first half of periods was again better than the second half in terms of allowing fewer goals.

So now let's look at the season as a whole: 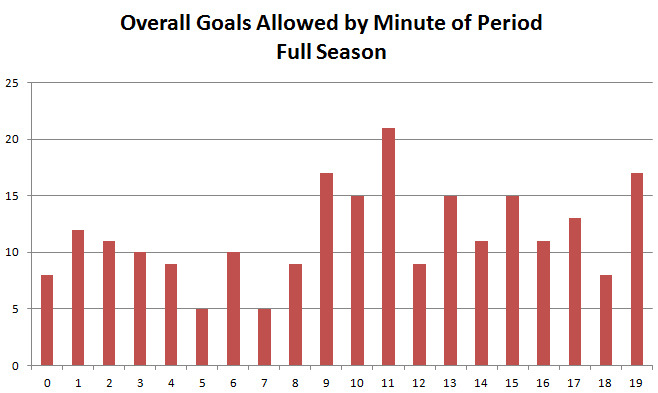 Goals Allowed per Minute of a Period, Full Season

So this just combines the totals of the first two graphs and shows the full season. You can see that, in addition to the final minute, the 10th through 12th minutes (9:00 - 11:59) seems to give the Isles fits. In fact, the Isles gave up 23% of their goals for the season during this three-minute span.

Just so you can see more clearly how much worse it gets as the period goes along, I broke the full-season goals against into five-minute increments: 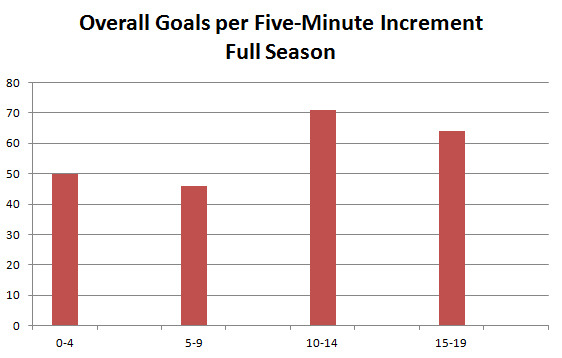 I haven't done enough research to know whether there's anything significant in these numbers or if it's all just the noise of variance and small sample sizes. I haven't look at the league as a whole, nor have I compared these results with previous Islanders seasons.

But maybe we can take some guesses as to why this trend might be appearing? Fatigue/conditioning? Intermission instructions getting lost? Systems breaking down?