Breaking News Islanders TRADE: Bo for Beau (and Raty, and a 1st...)

Ottawa was the last team to hit 61 games played this past Tuesday, but between the weather and a nasty bout with the flu, this is a few days later than I'd like.

If you were to think of this season as a 30-team horse race, the Isles have been holding a very even pace, just off the leaders but well ahead of the pack, for the entire year. Only two other teams (Tampa, Nashville) have shown the same consistency over 61 games.

Other teams have had serious pushes, and Buffalo was euthanized just a few steps from the starting gate. It all leads up to what should be a very entertaining last quarter, and for a change, when we're talking 'top 5', it's in relations to the NHL standings, not our draft pick. On to the pretty pictures! 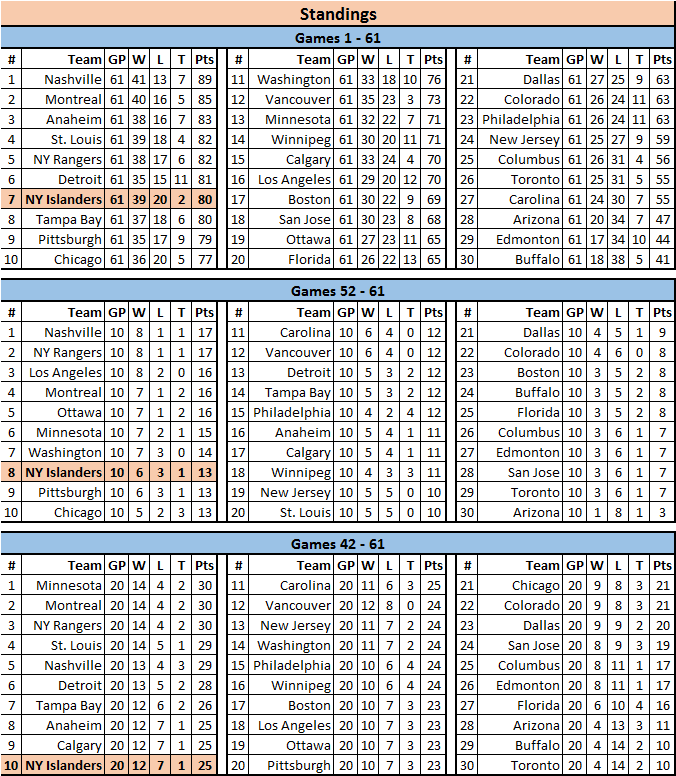 The Isles have been remarkably consistent this year, gaining 12 points or more in every segment.

How did we arrive at this result?

First, shooting the puck on net... 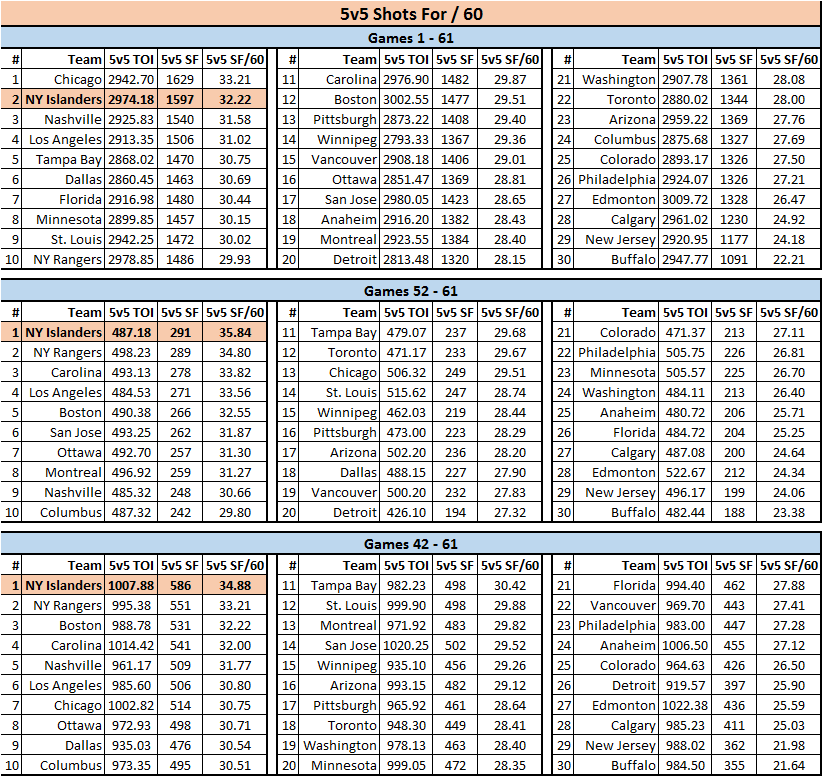 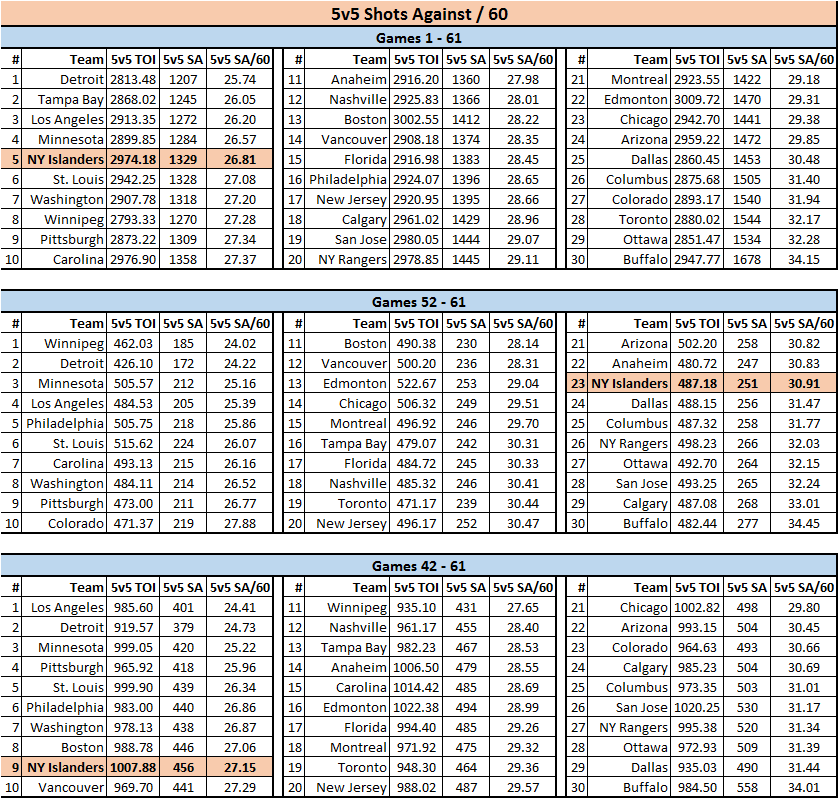 We've actually fallen off a bit the last 10 games, but are still 5th best in the league at keeping the other team from shooting at 5v5.

When it comes to differential, though... 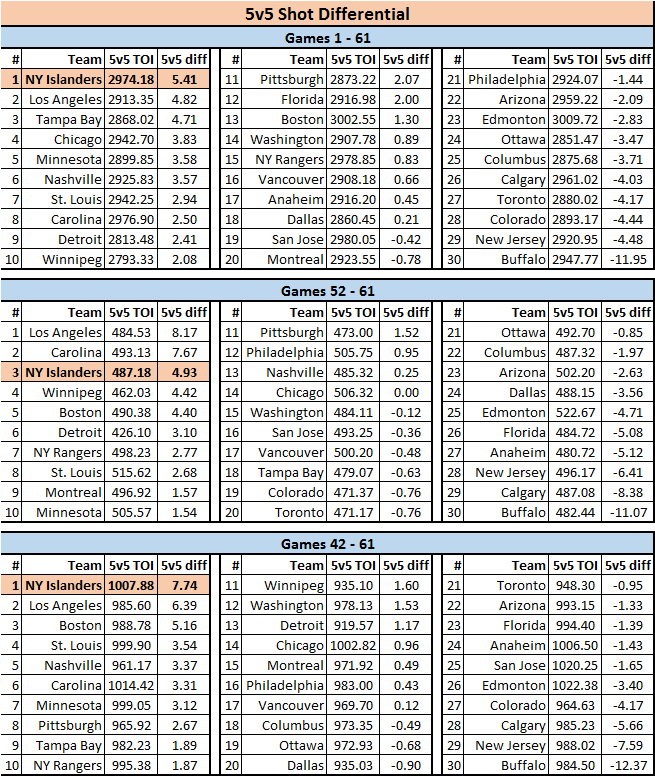 We're the best at it. When you consider that roughly 80% of an NHL game is played at even strength, it's a very good thing to be the best at.

How about 'in theirs'? 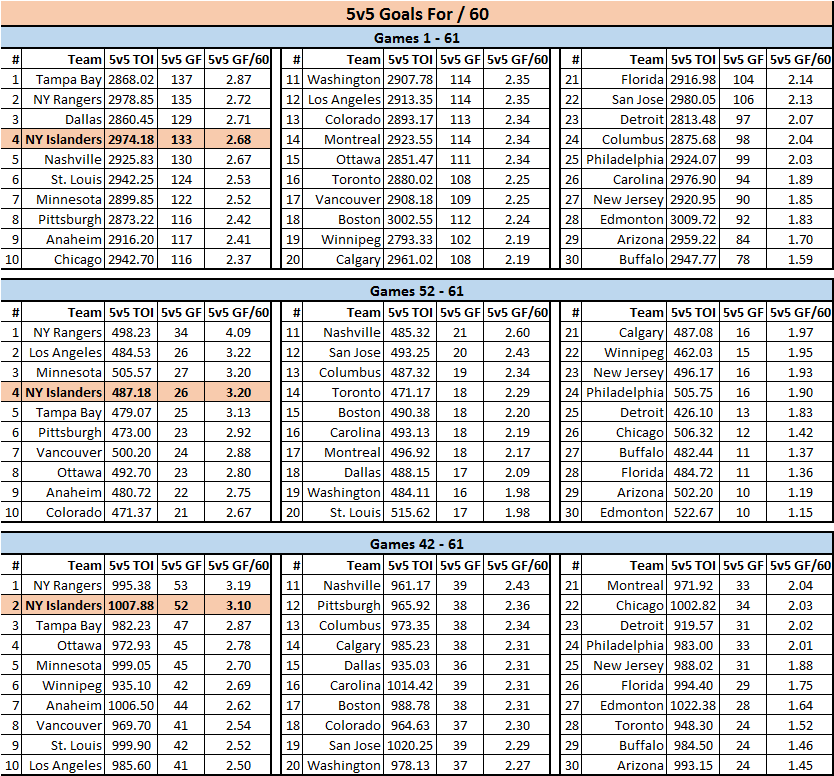 We've been almost as hot as some other team that's been forced to play most of the last quarter season with its backup as the starter. 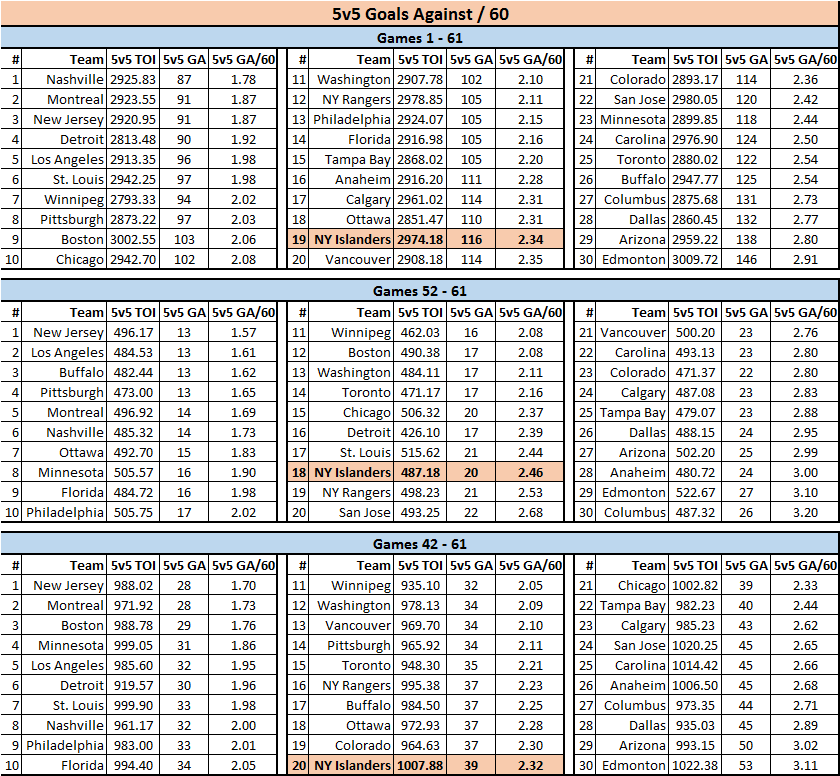 Not so much. At least it's only been just below average, which is a substantial upgrade from last season's Mr. Softee truck parked next to an open gate. Buffalo had actually put together a run of good goaltending, prompting the team to trade all their goaltenders away in exchange for a bullfighter waving his cape in front of the net.

Special teams.. 'gifted and talented' special, or 'paste is a food group' special? 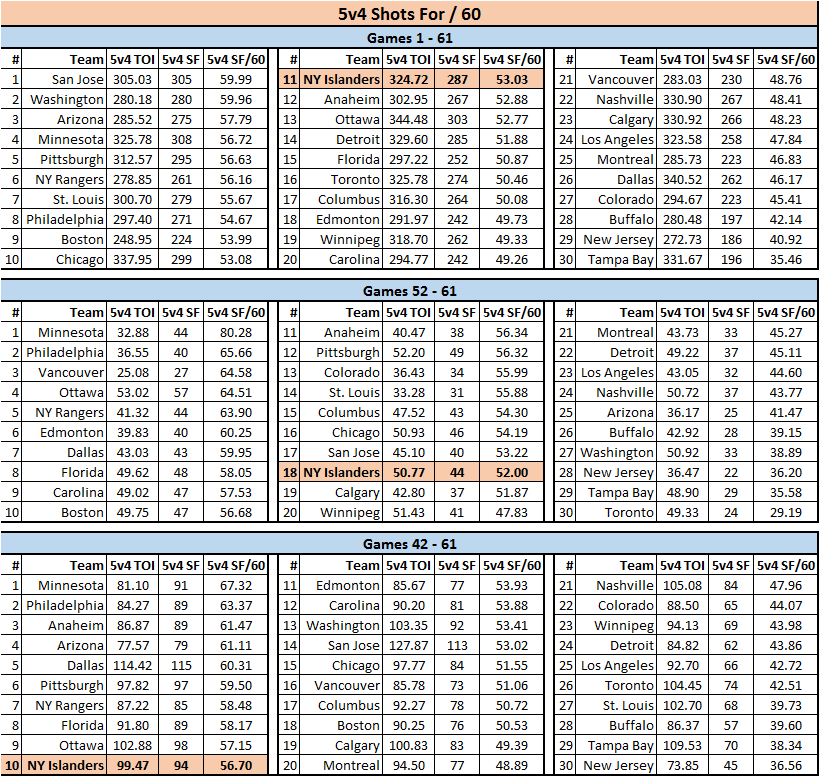 A 'struggling' Isles PP has still been average to slightly above average in terms of getting shots on net. 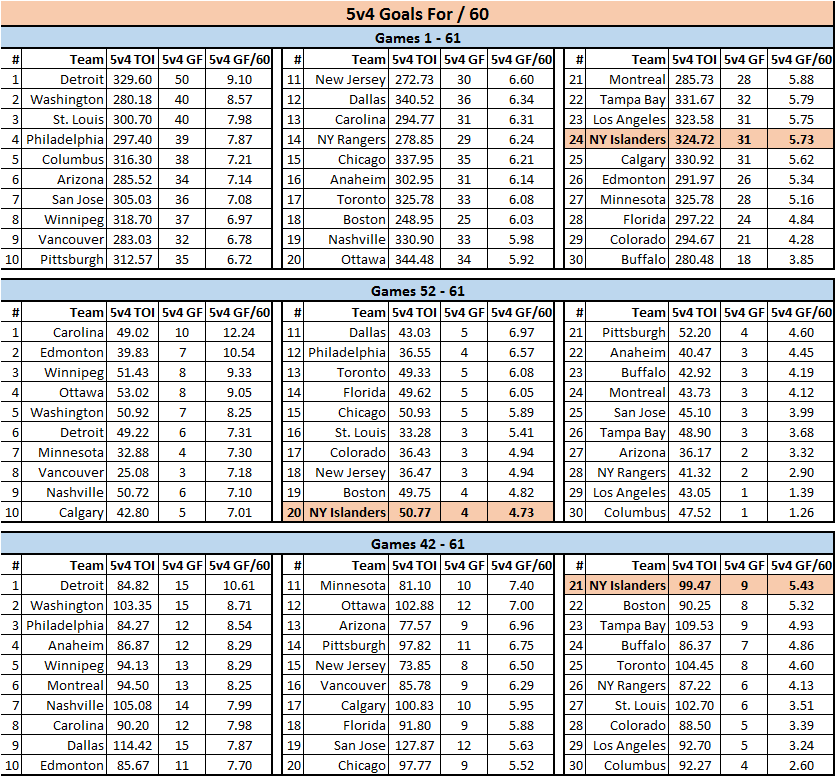 But many of those shots seem to be right at the goaltender, as our scoring rate has been below average.

Our PK though... they've turned the corner, right? 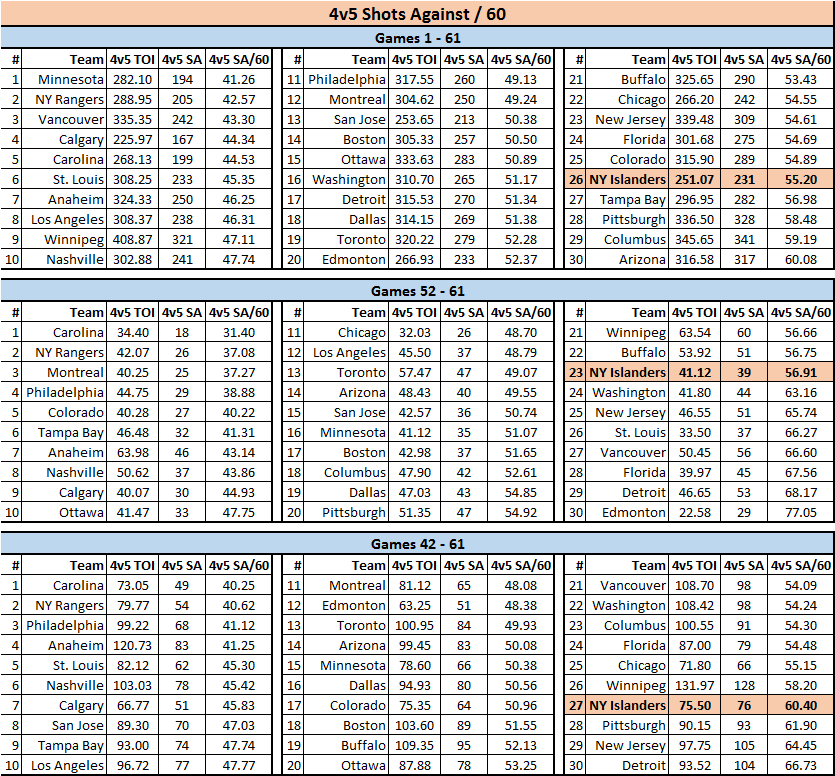 We're not dead last! Limiting shots has gotten better over the last 10 and 20 games. But really, it hasn't, it's just that other teams' PK tire fires are burning brighter than ours lately. We really haven't gotten better, several teams have gotten worse.

So this last picture should come as no shock to anyone who has watched any Islanders game this season... 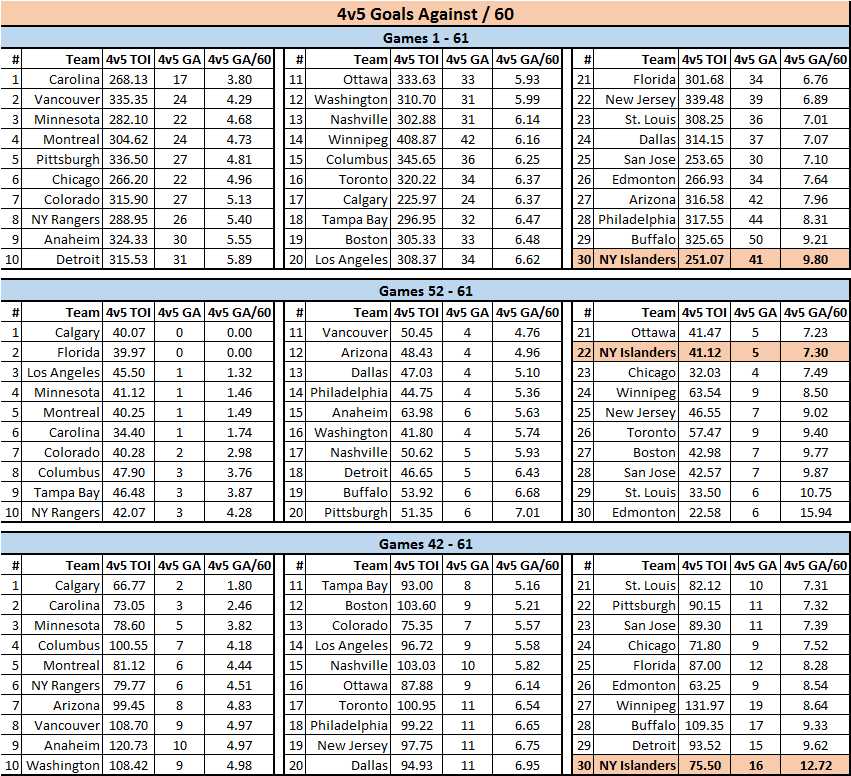 Our PK goaltending has picked up the last 10 games, but not enough to get it out of the bottom 10 in that stretch, but if they keep that up, we could finish 29th in PK Goals Against / 60 this year.