An athlete begins a new phase of his life as the smiling face of a major shopping hub.

(Ed. note: The following article appeared in this morning's print edition of Missouri's Fenton Frugal Shopper in its "People in your Neighborhood" section. It is being posted here with permission.)

Shoppers entering the Walmart Supercenter in Fenton will be welcomed by a new face starting today, one that's often been hidden behind a mask.

Martin Brodeur, 87, is set to begin his new job as a Walmart greeter after spending most of his life as a goalie for an ice hockey team. Now in his twilight years, instead of keeping his crease clear, "Marty" will patrol the entrance to one of St. Louis County's busiest retail centers.

"I look forward to a new challenge," Marty said as he pulled on his blue greeter's vest for the first time and pinned on his crisp, new name tag. "It's nice to be wanted by a top notch organization like Walmart and I'm here to do whatever I can to make the team better."

Born in Montreal, Quebec, Canada in 1928, Marty emigrated to New Jersey at 19 and spent the next 69 years as a goaltender for a local hockey team. He wasn't a natural athlete and was never the biggest or strongest guy on the ice. But he loved the game and worked hard everyday to get better. He never wanted to give up playing, but he knew it was time to walk away from the game he loves.

"When teammates stop returning your calls, it's an indication they don't want to play with you anymore." - new Walmart greeter Marty Brodeur

"I couldn't go into a split the way I used to. That was one sign," Marty said. "Also when teammates stop returning your calls, it's an indication they don't want to play with you anymore. That made me think about retirement."

This year, Marty moved to St. Louis because it's known as a place that welcomes elderly folks looking for a comfortable and affordable place to live out their final months. Walmart is a part of that, with roughly 75 percent of the Arkansas-based store's workforce being over the age of 80.

A Walmart greeter has many similarities to an ice hockey goalie, Marty says.

"They both require a lot of focus, dexterity and taking charge of your area. In hockey, it's a net and here it's a bunch of automatic doors, some candy machines, a RedBox kiosk and maybe a pop-up cardboard DVD display. Not a big difference."

And if things get rough on Black Friday or other sale day, Marty says ice hockey has prepared him for that, too.

"I've been in a few scrums in my day," he says, flexing one of his flabby arms. "I'm not afraid to slash someone's knees or crosscheck them if I have to. I don't care if they're old, pregnant, on crutches, whatever. My job is to keep pucks, er, punks out of here."

(click below to read the full Fulton Frugal Shopper article) 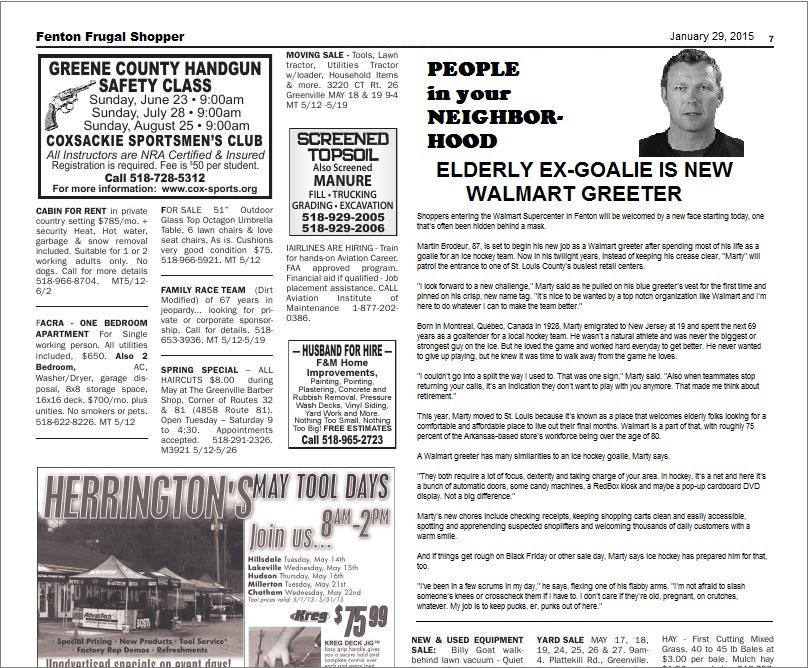 This is not real, it is fake, Martin Brodeur is not a greeter at Walmart. Although he can probably be found at some of St. Louis' finer barbecue establishments for the rest of the season.