New York Islanders vs. Carolina Hurricanes: Lines, how to watch, who to watch

Share All sharing options for: New York Islanders vs. Carolina Hurricanes: Lines, how to watch, who to watch

Tonight is the only preseason game of 2014-15 -- and the last one in history -- at Nassau Coliseum. To welcome the Carolina Hurricanes, the New York Islanders will be using an intriguing lineup for the home fans.

Highlights include a line of young prospects who should become important pieces of the team this season, a few promising defensemen, another audition on John Tavares' left wing, and a longer run for the new #1 goalie, Jaroslav Halak.

Breaking down every forward in camp, and the jobs they seek.

The Islanders posted the lineup for tonight in their game preview, but Newsday's Arthur Staple had the expected lines and pairings like so:

After Josh Bailey played there and scored in the opener against Ottawa in St. John's, Mikhail Grabovski gets a look at left wing on the first line next to John Tavares and Kyle Okposo.

Cory Conacher and Jack Skille, both bubble guys, play around old reliable Frans Nielsen. Conacher has better odds of making the squad, but Skill at least helped himself with the late winner in St. John's.

The fourth line is traditional, but Matt Martin and Casey Cizikas are two of the incumbents under pressure to prove they should keep their spot. 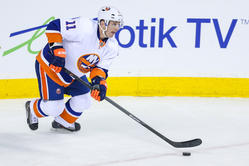 The alleged "weakness" of the Isles includes too many men, not enough job openings.
Pairings of Promise

The defense, according to Staple:

Thomas Hickey and Lubomir Visnovsky are familiar; if they stay together that's a fine second pairing. But Griffin Reinhart and Ville Pokka are both strong candidates to force a veteran out.

Meanwhile, Aaron Ness is somewhat the forgotten prospect, but he can help his place in the pecking order by creating a puck-moving pairing with new signing T.J. Brennan. Brennan is on a one-way deal and after lighting up the AHL, is angling for a spot that might otherewise be ticketed to Matt Donovan.

In goal, Kevin Poulin backs up Jaroslav Halak, but coach Jack Capuano said the Isles are leaning toward having Halak play the full game.

The Hurricanes limp in from Buffalo, where they played last night and lost Jordan Staal to a broken leg. That's got to be freaking depressing. Here is their expected lineup, via Canes Country:

Well, the game result doesn't count. But the execution of it does -- for these players' spots in the lineup, but also for fans jumping to the Coliseum for what will soon be a dwindling number of opportunities to see them in the place the Islanders made their name.

Enjoy. And don't break a leg.