Training camps are opening and teams across the league are bringing in bodies on Player Try Out contracts, or PTOs.

In some cases, the PTOs are to fill roster spots in split squad games or to find players for minor league teams. In others, the NHL club wants to see if a cheaper free agent can find a regular role, whether that player was a recent draftee looking for a new shot at the big leagues or a veteran who feels he still has some miles left in the tank.

Although PTOs are a common sight, the process of inviting a player to camp and having them try out is a bit murky for fans. Few details are given out by teams, and the players only want to focus on making it out of camp with a standard contract for the rest of the season.

Finally, a Lighthouse Hockey source deep inside the NHL has given us an item that provides great insight into the league's PTO practices.

A brochure, available at the NHL's offices in New York and Toronto, by mail via request or as a downloadable PDF, gives interested players all the details they need for finding a new team. The single-page pamphlet contains tips and advice for getting through training camp, adjusting to the new team and getting a contract, for players of any position or age. It also sheds light on the mindset of players going into a PTO.

We have embedded the brochure below (click to enlarge) and the actual PDF can be downloaded here.

Training camp PTO's might seem like a minor, almost forgettable point to most hockey fans. But to players, they are a golden opportunity to either break into the league or stay there for just a little more time. Following this brochure seems like a smart career move. 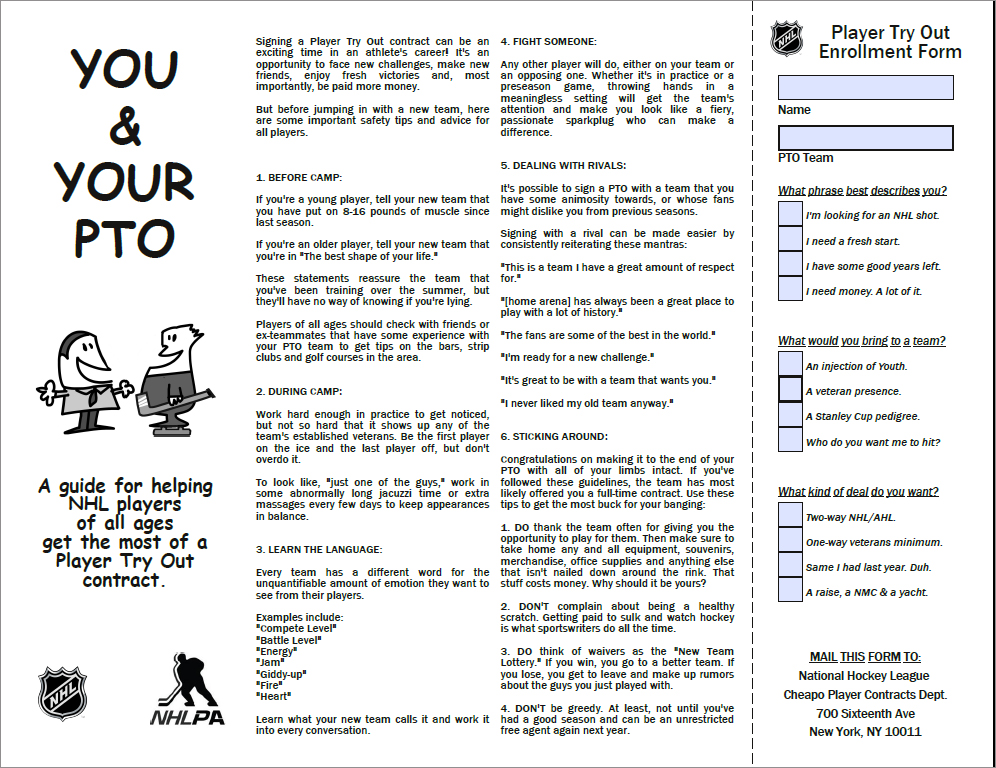 This is fake, the brochure is not real there is no 16th Avenue in New York. The best ways to get invited to a camp on  a PTO are still to be a first round bust, an All Star from a decade ago or a goon.