Retirement isn't in the game.

Martin Brodeur has said he would like to play for a contender, preferably in the Western Conference and would settle for a back-up position if not given a chance to start.

Thanks to a new video game, the veteran goalie will do all of those things and more.

EA Sports is set to release a patch for NHL 15 that will remove all of the league's goalies and replace them with Brodeur, extending the already Hall of Fame goalie's career indefinitely in the virtual world. Each team will have two Brodeurs - one starter and one back-up - plus two additional Brodeurs in the system who can step in in case of an injury. The game's free agent pool will also only be stocked with multiple Brodeurs.

"I feel like I can still be a starter and contribute to a team. Doesn't matter if it's real life or a video game," Brodeur said in a press release issued by EA. "I don't feel ready to retire. That's the easy way out. Being on every team in the league can show the world that I've still got what it takes to play at this level."

Marty is a legend and deserves to play until he's good and ready to walk away from the game. Now, with the power of NHL 15, he never, ever has to. - Agent Pat Brisson on the "Brodeur Mode" patch for NHL 15

Brodeur's agent Pat Brisson says the new "Brodeur Mode" patch will be the first time EA's NHL series has focused on a single player, let alone a free agent who could simply ride off into the sunset if he isn't signed with a team before camp.

"When we approached EA about patching in Brodeur Mode, they immediately thought it was a fantastic idea after a lot of cajoling," Brisson said. "Marty is a legend and deserves to play until he's good and ready to walk away from the game.

Brodeur is a three time Stanley Cup champion and four time Vezina Trophy winner, all with the New Jersey Devils with whom he has spent his entire 21 year career. The 42-year old is the winningest goalie in NHL history with 688 victories. Despite a fifth appearance in the Cup final in 2012, Brodeur's stats and performances have naturally and steadily declined over the years. This coming season, the Devils' starter will be the younger Cory Schneider, who outperformed Brodeur in shared time last year.

Brisson and Brodeur have been advertising the goalie's services to several teams this offseason, but have not found any takers. Until they do, Brodeur will continue to rack up all of the victories in NHL 15.

"This isn't about an athlete that's past his prime who doesn't want to let go and move on," said Brisson. "It's about everyone seeing what Martin Brodeur can bring to their team so that they won't ever want to let go of him."

You never know where I could end up - Martin Brodeur

Brodeur's rating in the game, the numbers used to calculate how good he is, will be a combination of all of his past seasons. That makes him the game's highest rated player and virtually impossible to score on, something Brodeur believes reflects where he is in his career.

"I'm still waiting for an opportunity, so why not play for every team and take on 30 new challenges at once," Brodeur asked. "I have a lot of hockey left in me. This is a great way for me to get used to being on every team because you never know where I could end up."

Other features of Brodeur Mode include the ability to call a virtual agent to see if any teams have offered any contract extensions and the removal of all fatigue settings so that all the Brodeurs can play every game of every regular season and playoffs.

An option to just retire has yet to be implemented and will not be added later, according to an EA spokesperson. 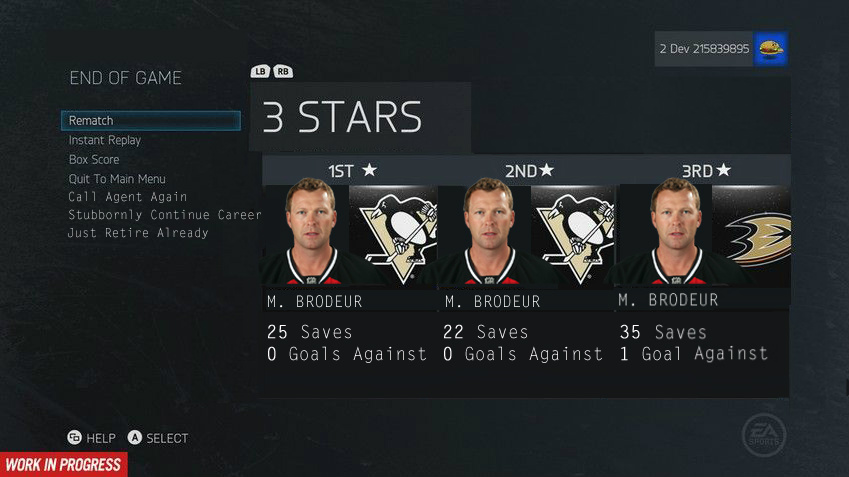 THIS IS FAKE it is not real there is no Brodeur Patch coming to NHL 15 so don't get your controllers all up in a bunch.