Buried for years, a map shows how the earliest Reddit users felt about rival hockey teams.

An antique map, recently discovered by users of the popular multi-topic message board Reddit, shows which states and provinces hated each of the NHL's Original Six franchises the most based on votes from fans at the time.

The map, buried under rubble for six decades in a vault below Reddit headquarters in San Francisco, is believed to be from 1946 and shows how users of the social networking site spread their hate among their hockey rivals at that time.

"It's quite a time capsule," said internet expert and digital archaeologist Hans Cellars. "In the early 1940's, both the NHL and Reddit were still finding their way and sorting out how they wanted to move into the future. The NHL consolidated into six teams and Reddit was only a small message board of two or three hundred forums back then."

The Original Six Hate Map has the Montreal Canadiens unsurprisingly as the most hated team across most of English-speaking Canada. Their rivals, the Toronto Maple Leafs, were mainly hated in the Habs' home turf in the province of Quebec. New York and Boston hated the Bruins and Rangers equally, while a hatred of the Chicago Blackhawks was strong in the midwest.

"Everyone on Reddit loved the Red Wings back then," said Cellars. "The only exceptions were the city of Chicago and the 80% of the country that had never heard of the sport at all. And Alaska."

One sixth of the votes went to Pirates off the coast of Florida, who were not an NHL team at the time - internet archaeologist Hans Cellars on the newly discovered NHL Original Six Hate Map.

As exciting as the discovery is, the accuracy of the map cannot be verified. Cellars could not find the actual voting data, and suspects that inaccurate collections, small sample sizes or voters submitting intentionally false answers as jokes may have skewed the final results.

"One sixth of the votes went to Pirates off the coast of Florida, who were not an NHL team at the time," he said. "Neither were the Mexicans who received a sizable portion of votes from Texas. I think they may have been talking about actual Mexicans. Also, I think the Blackhawks hate in the American southwest wasn't for the hockey team, but for real Native Americans. It's hard to tell.

"It's also likely that the votes for dragons in the Pacific Ocean may have been a prank."

"Sports Hate Maps" ask Reddit users where they're from and what teams they despise the most, and the results are broken down by state, country, etc. Hate Maps for the NFL and NBA were the first to hit Reddit, followed soon by a baseball version. As usual, the NHL Hate Map appeared well after the other sports' maps had arrived. According to the current NHL map, the Boston Bruins are the most hated team across North America (with the Ottawa Senators and Vancouver Canucks somehow turning up as the most hated teams in Wyoming and Alabama, respectively.)

Despite the flaws, Cellars calls the antique Reddit map a remarkable find that tells us much about sports, the internet and how society evolves over time.

"Hockey fans during the Original Six era were just like hockey fans are today," said Cellars. "They hated their rivals intensely and wanted to voice that hatred wherever they could. The only difference between then and now is the number of teams to hate has increased while the time to register your hate via transcontinental coaxial cable and microwave radio transmissions has decreased." 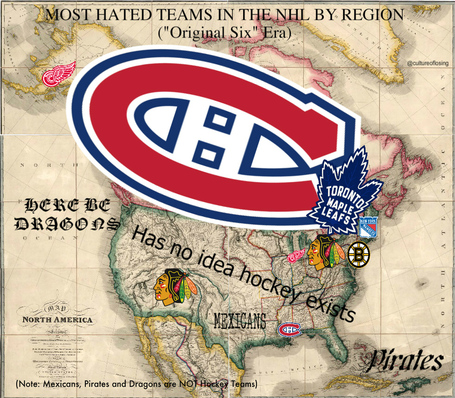 This is fake. There was no Reddit in 1946 and this map is a complete fabrication. Much like Africa's hatred of the Winnipeg Jets.