The 2014-15 season hasn't even started yet and the list of "final" things happening at Nassau Coliseum is already filling up. Final draft party, final prospect camp and now a final patch to commemorate the Islanders final season at the ol' barn.

Teased yesterday on Twitter, the Islanders revealed the patch in full today on their SnapChat account. Icethetics has a short post on the patch, which includes the picture below. 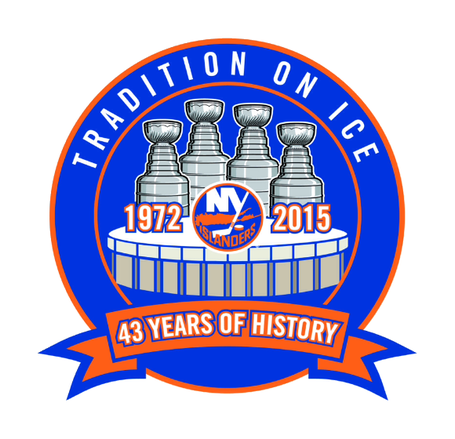 Icethetics review isn't kind, but at least it's short:

From a design standpoint, good grief. So much text. So many wrong colors - Islander blue is not that bright and I count about six different shades of grey. So many different heights for all the Cups.

The Islanders later posted a second picture of the tangible patch, along with some autographed pucks decorated with the image.

Another view of #isles patch. pic.twitter.com/phyi905BRS

The Islanders have never been shy about commemorating events and persons with shoulder patches. These are not among the finest examples of the practice.

It's a primarily blue patch that will spend at least half of its time on a blue jersey of a different shade. It's got a lot of block letters jammed into a small area. The entire concept of it seems generic and uncreative. Yes, the Coliseum is the home of four Stanley Cups, but it's so much more than that.

Once the Islanders leave for Brooklyn, the future and purpose of the very building will be in question. Whether the politicians of Nassau County want to acknowledge it or not, it's kind of a big deal, especially for those of us that grew up minutes from the arena and saw dozens, if not hundreds, of games there.

This patch looks like it could have been slapped on any Islanders related paraphernalia since 1984. For the last season at the only home arena they and every Long Islander has known for the last 40-plus years, I expected something a little more unique. Just draping "Tradition on Ice" across the top doesn't help.

In other words, it's a bummer. But by Game 2 against the Hurricanes, you won't even notice it, which is probably for the best.