Also: Something about wanting to be better than John Tavares, which, though crazy, would be quite useful for the Islanders.

Throughout the lead-up to the 2014 NHL Draft, and apparently throughout the summer ever since, New York Islanders prospect Joshua Ho-Sang (1st round, 28th overall) has been asked: "Why haven't you received an invitation back to Hockey Canada camp?"

Apparently, Ho-Sang has grown tired of the question, as well as (for him at least) the mystery behind it. 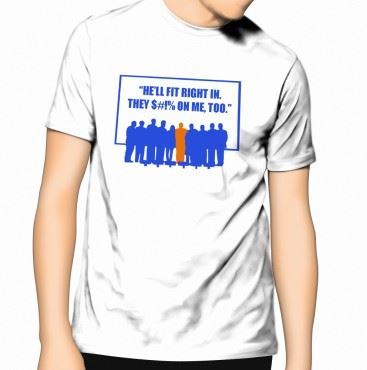 Can you really afford to walk around your neighborhood without one?

TSN has a boatload of thought-provoking quotes from the youngster, including the now-familiar list of invitations never granted:

But despite a quick and productive start to his OHL career, Ho-Sang was overlooked for Team Canada's Under 18 team in the spring, was not included on the 2013 U18 team to play at the Ivan Hlinka Tournament and was not invited to Team Canada's World Junior summer development camp roster this year.

The full article covers the gamut, from Ho-Sang on this and on why "outspoken" players like him are frowned upon, as well as some editorializing from the writer, Dave McCarthy of TSN Radio 1050, on the merits of Ho-Sang's points. About the recurring question though:

For now, Ho-Sang appears to have come to grips with the fact that he seems not to be at the forefront in the minds of those responsible with building various installments of Team Canada. He's just tired of always having to explain his omission.

"I don't play for Hockey Canada, I play for New York," he said. "I don't really care. Playing for your country is great; it's more a personal thing. It's kind of annoying though because I have people asking me all the time why I'm not there and not a part of that stuff but that's what it is. I think the only way I'd be on that (World Junior) team is if I played in the NHL..."

When asked for his career goal, Ho-Sang mentions wanting to go to camp and push himself against the best players -- not just be glad to be there -- and, yes, "to be better than John Tavares."

Don't mistake it as cockiness or arrogance, though. Ho-Sang clearly appreciates the position he is in and understands there is a process to advancing to the NHL level that must be followed. He's just very sure he can do it.

Again, check TSN for many more quotes and their full context.

What we have here is a player who will be a good quote. And if we're lucky, a good NHL player.