We are starting to get the first trickle of information about season tickets for the 2015-16 season, the Islanders first at Barclays Center. Up until now, those without season tickets have been able to put down deposits on seats in Brooklyn, but those with the most seniority among STHs will actually be able to pick their seat for the first time tomorrow.

If you have season tickets, you may not even know about how the seats will be made available for full-year packages. I know I have not been told anything about this. The first group of seats that will be made available, the only group of seats available until February, are the VIP seats. Starting tomorrow, STHs who have been active since the 1970s will get first dibs on these VIP seats. There may only be a 72-hour window for those long-time fans to get the jump on everyone else. Next are season ticket holders from the 1980s, 1990s, 2000s, and 2010s.

The prices on these seats are, you guessed it, outrageous. This is all rumor until I can confirm it on the website tomorrow, but a first-row seat (court...er, rinkside) is $1,000 and a seat in any of the VIP sections are $150 per game or higher. VIP sections are thought to be the middle three sections on both sides of the ice (Sections 7, 8, 9, 23, 24, and 25 - ignore the prices in the graphic, they are from last season's preseason game). I am not sure how many rows that entails. It could be just the rows marked in teal in those sections in the seating chart below, or it could also include the red sections above them. 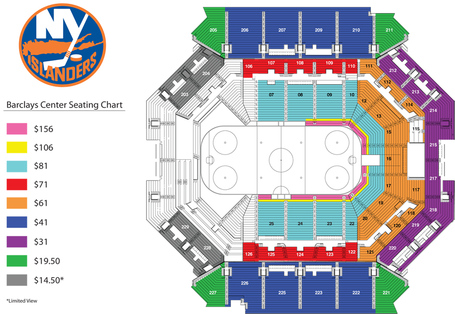 The one major benefit, if you are willing to pay that steep price, is that the VIP seats do include food. I think this may be similar to the setup at Prudential Center, where the middle three sections are fenced off and limited to those with tickets in those sections.

The worst part, especially for me personally, is that if your season ticket circle of friends have people with different levels of seniority, I do not see a way for you to sit next to them at Barclays and retain your seniority. That is something that must be fixed.

It will be interesting to see how fast these seats fly off the proverbial shelves. Obviously, the Islanders determination to field a much better team next season has to do with the move to Brooklyn in 2015. But, how will that affect the longest-term STHs? Most 35+-year season subscribers probably predominantly live in the North Shore of Nassau County or Suffolk County. Will they make the longer drive and/or train ride to Barclays and spend much more for their seats?

Have any STHs out there heard any more details about this? Have you heard different information?

After 12 years (11 seasons) as a season ticket holder, I think I might lose my seniority and buy half of one of my friend's seats. It is too early to tell, but early indications might be what most of us have feared: the long-time, long-suffering fans will be priced out of the new building.

UPDATE: After being told an e-mail would be sent today (Thursday), at least someone from this first group (1970s season ticket holders) never got an e-mail. I would suspect he is not the only one.

UPDATE (7/15): Finally, five days after the e-mail was supposed to be sent, they finally made the VIP seats available. However, probably due to the delay, the 1970s and 1980s season ticket holders were both given first choice. Also, regarding STH pricing, the front row ("rinkside") is $1,000 a seat in the three center ice VIP sections, followed by $300/seat for the next couple of rows and $185 for the rest of the lowest section. The VIP seats include the 100-level sections right above it, for which there are six rows, curiously listed as Rows 4-9 (what happened to the first three rows?). The "first" row (Row 4) is $165/seat and the rest of that 100-level section is $150/seat, which is the cheapest in any of the VIP seats that were available.

The good news is the train has finally left the station and seats are actually being scooped up for the 2015-16 season. Early counts indicate the 100-level sections are half-full already and the Atlantic Avenue side (north side - Sections 7-9/107-109) are flying off the shelves faster than the Flatbush Avenue side (south side - Sections 23-25/123-125).

I had to think that Barclays wanted their hands on the seats and with the Islanders ticket folks not getting their act together quickly enough, Barclays was not going to move back the deadline to when they can offer the seats. The Isles ticket guys have a golf outing today. If Barclays was running it, they would probably make the ticket agents pay the greens fees.

I will follow up in February with Part 2, when the rest of the seats in the arena will be made available to season ticket holders.