San Jose thinks it has found the missing ingredient to get back into the Western Conference's elite: Lots of girls with shovels.

The San Jose Sharks finished their season on a sour note, blowing a 3-0 series lead in the first round to the eventual Stanley Cup champion, and their in-state rival, the Los Angeles Kings. The Sharks' decision to join the list of NHL teams employing young women in revealing outfits to scrape the ice in-between stoppages has not made their fans any feel better.

But the Sharks see the two events as connected; one a problem that can be corrected by the other.

"Our goal is to win the Stanley Cup," said Gary Lorraine, the Sharks' new vice president of Sanitation Entertainment. "And when we did extensive, advanced analysis on all of the recent champions, we noticed they had one thing in common: Ice Girls.

"We now have that essential element that we were missing in the past. When you add Ice Girls to our roster, I feel we can be the NHL's next dynasty."

Since 2007, six teams who have won the Stanley Cup employed Ice Girls, the common term for teams of young females - sometimes wearing tight, revealing or shiny costumes - that scrape and shovel the ice at TV timeouts. The Kings and Chicago Blackhawks, both with scantily-clad ice crews, have each won two Cups in the last four seasons. 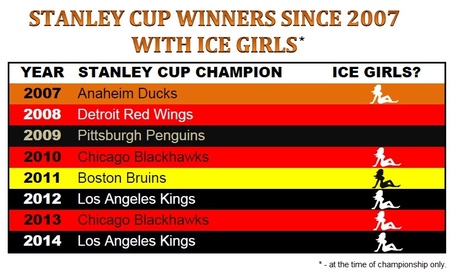 This fact has not been lost on the Sharks, who are looking to re-establish their place in the tough Western Conference and feel the Ice Girls are the key free agents they needed to acquire this offseason.

"The Ice Girls have a very palpable effect on team morale and performance," Lorraine said. "First, they keep the ice in great condition with good old fashioned elbow grease. Second, when they look good and smile and display a great attitude, the excitement rubs off on the players, who have told us as much. They love them.

"Finally, our research has shown that spectators at games are overwhelmingly in favor of seeing women every few minutes. Ice Girls, dance squads, cheerleaders, arena hostesses, t-shirt cannon snipers. You name it, they want girls doing it. Thanks to the Ice Girls, the fans get into the game more, the players get into the game more and it gives you that extra little something over your opponent."

Unfortunately, selling San Jose fans on the Ice Girls hasn't been easy. The complaints have been frequent and vocal as many season ticket holders and customers aren't happy about the Sharks adding a dimension they had previously resisted. Some feel the Ice Girls are a way to distract fans from the actual roster's problems and deficiencies against the NHL's powerhouses.

"Being a hockey team in California without a gang of hot girls cleaning the ice is like being the ugly girl at the bar with two hot friends." - Sports radio host Joe "Jabber" Jawzowsky on the Sharks new Ice Girls

Like it or not, the Sharks are going all-in and making a run at the Cup this year with the Ice Girls.

"The fans will come around when that big trophy comes to the Bay Area," said local sportstalk radio host Joe "Jabber" Jawzowsky of Jabber and Clamhead in the Morning. "The Ice Girls almost guarantee a Stanley Cup. Anaheim has Ice Girls and a Cup. L.A. has Ice Girls and two Cups.

"Being a hockey team in California without a gang of hot girls cleaning the ice is like being the ugly girl at the bar with two hot friends. Everyone will ignore you and shove you and spill beer on you because you're a nobody and your friends are smokin'. So you need to get to the gym, lose the glasses, get your hair done and get a push-up bra. Or else you'll go home and die alone and unwanted."

The auditions for the Sharks Ice Girls team will be held on August 3rd. Lorraine said any applicants that miss the final cut will still be welcome to attend Sharks games this season as long as they purchase official team apparel that is pink, short, tight or has cutouts in at least three places.

THIS IS FAKE. No one at the Sharks said this and there is no Jabber and Clamhead in the Morning. The Ice Girls will not help the Sharks win the Stanley Cup. Take it from a fan of the team that invented them.