Wastelands and Cheapskates: An exclusive look at a standard NHL No Move Form

If you want to stay out of an NHL wasteland or media black hole, just fill out the form.

Share All sharing options for: Wastelands and Cheapskates: An exclusive look at a standard NHL No Move Form

NHL players can avoid getting traded to specific teams by maintaining a list with their representatives and their current team's management. It's very common for a player to nix a trade to a certain city and in just the last few days, Ottawa's Jason Spezza and Montreal's Josh Gorges have made headlines by refusing moves to Nashville and Toronto respectively because the teams were not among their preferred destinations.

It can be frustrating for fans when a player balks at a trade to their team. Not only is a player disrespecting your favorite uniform, but the mechanics behind "NHL No-Fly" lists also are clouded in a deep, dark mystery. Until now.

Lighthouse Hockey has obtained a copy of a standard NHL Player Movement Restriction form, used by players and agents to keep away from undesirable destinations. This document has all 30 clubs segmented by categories that players typically cite as reasons for not wanting to play in a specific city. The form, titled a 1019-9, is updated every year as team's circumstances and causes for concern change.

The player completes the form, signs it, and his agent files it with the NHL's Central Registry.  He can revise it and resubmit as he pleases. The amount of teams he can choose is up to him and his current team.

The process has come a long way since the very first no move list in NHL History. In 1942, defenseman Artie Twelldemuer of the Brooklyn Americans refused to accept any trade to Chicago due to a debilitating fear that mobsters from the area were looking to kill him over some unpaid dog racing bets. Twelldemuer wrote this restriction on a cocktail napkin and mailed it to NHL commissioner Clarence Campbell in Toronto. It turns out, Twelldemeur didn't need to worry. The day before receiving the napkin, Campbell OK'd the folding of the Americans franchise, and Twelldemuer left hockey forever to open up a kennel in Astoria, Queens.

The current, modern NHL cocktail napkin is embedded below (click to expand the list...) and can be downloaded for home-use here. 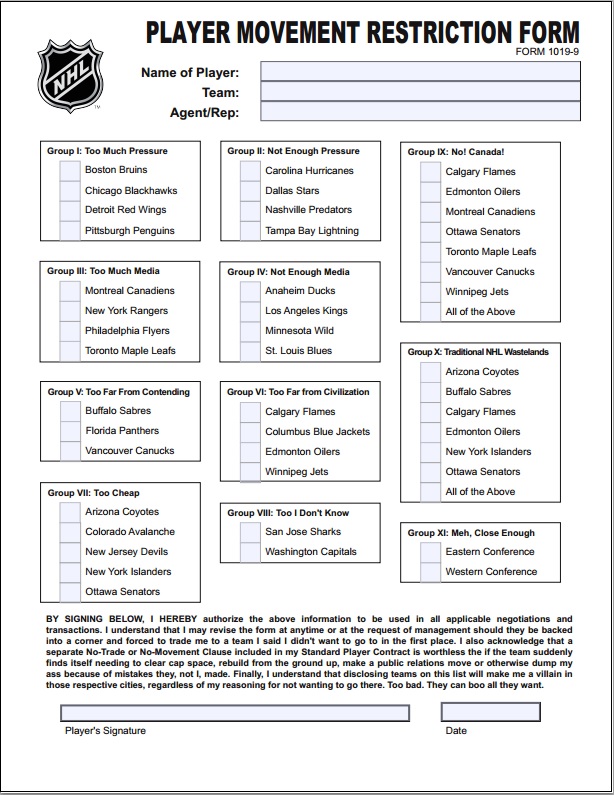 THIS IS FAKE. IT'S NOT REAL. GORGES, SPEZZA NOR ANYONE ELSE HAS USED THIS FORM. They have computers for this stuff now.