My name is Jiri / Pronounced with a yeah-zhee / And I'm about to get funkzhy... - Richard Wolowicz

One free agent teams are after this summer has a name many fans are not familiar with. 22-year-old Czech Jiri Sekac, "pronounced (Sea-Kack)" is currently playing LW for HC Lev Praha in the KHL. His hometown is very familiar to one eventual Hall of Famer who wears #68 and has his own peanut butter brand. Jaromir Jagr, a native of Klando who currently plays for the New Jersey Devils at the age of 57 42, could be the bridge between Sekac and Newark, NJ. At 6’2’’, 190lbs, this LW left handed shot is considered ready to make the jump to the NHL. But what took him so long? Here’s what happened...

Sekac sat in on a few NHL drafts unfortunately as a spectator while his peers were selected one after the next through each round. After that, he was cut by the Peterborough Petes of the OHL in 2009. Sekac went on to spend two seasons with the Youngstown Phantoms of the USHL before returning to Europe and playing in the KHL.

Bob McKenzie reported last Friday on Insider Trading that Sekac is being pursued by at least 12 NHL teams.

With 11 goals and 17 assists, many NHL scouts took notice this season and began talking about whether or not he’s ready for the next step. Half a dozen teams believe he is. Allan Walsh, a name we’re all familiar with, the agent to PA Parenteau and Jaroslav Halak also represents Sekac and had this to say:

@Arby_18 who writes for SB NATION "Arctic Ice Hockey" also drew a Czech connection and how Sekac might find a bridge that leads to Winnipeg.

"And wouldn't you know it? Sekac also hails from Kladno, Czech Republic. Perhaps even more interesting (or scary, depending on how you look at it) is the fact that Sekac not only shares the same hometown as Pavelec and Frolik but also the same agent in Alan Walsh. The Jets could create their very own "Kladno Krew" (patent pending)."

"One of main knocks on Sekac is that he is an unorthodox-looking skater. Although he is not a physical player and could stand to be a little harder on the puck, he has shown a greatly improved "compete level" from the time when he a bust in Peterborough. Sekac is a stronger and more confident player than he was then. He has also developed his two-way game."

Full article can be found here.

As much as I try to ignore Hockey Buzz, it’s nice to see someone like Meltzer out there doing research on players that many of us are unaware of. He does a great job highlighting other European free agents which can be read in the article above. At the moment, unless your last name is one of Ekblad, no pull-up Bennett, or Reinhart, it’s easy to miss those diamonds in the rough this summer. But this is why teams have Pro Scouts.

Teams will often take a chance on European prospects and very few work out. Recently, we saw the Philadelphia Flyers put stock into Austrian forward Michael Raffl after scouting him at the IIHF World Championships. Raffl has turned into a decent bottom 6 winger, but as we know, those can be easily replaced through the draft and free agency. Potential is an interesting thing and very hard to measure. Sekac being only 22 years old and turning into one of those "late bloomers" may actually find himself more than a bottom six winger after his 2-year ELC is up.

So what can Garth Snow sell to Jiri Sekac that other teams can’t? The Devils have his hometown native which can be a huge draw for him and I bet Lou is going to consider bringing this guy in. Winnipeg also has a few of his friends. Philly has Jakub Voracek.

Before we begin, let’s learn what an Entry Level Contract looks like maxed out for 22 year old. The information provided below is cited from our friends at Cap Geek, who do a great job at informing us how much players get paid to lose the puck, play the perimeter and not score goals for your team when it counts most. Yes, that’s a shot at you, Rick Nash.

Players younger than 25 as of Sept. 15 in the calendar year their first NHL contract is signed are subject to the terms of Article 9 of the CBA and must sign an entry-level contract (ELC). This means the amount of salary and team-paid performance bonuses is capped, depending on his draft year or the year he signs. The length of the ELC is also specified based on the player's age.

* A one-year entry-level restriction applies to drafted players from Europe aged 25 to 27.

All ELCs are two-way contracts and can be extended by as many as two seasons (see "How does a contract slide?" in this FAQ). The maximum allowable salaries for players selected in each entry draft are as follows:

Signing bonuses cannot exceed 10 percent of the contract's total compensation. They are typically paid out annually.

Performance bonuses, or Exhibit 5 bonuses, cannot exceed $2,850,000. These bonuses are divided into two categories: Schedule A and Schedule B. 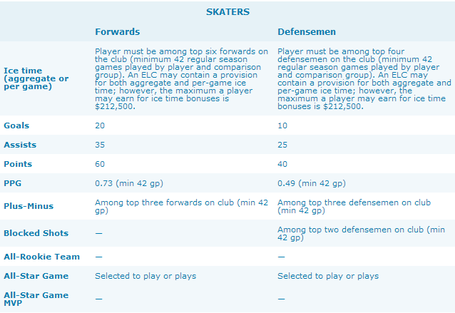 However, a player and club may agree to any compensation for the Schedule B categories listed blow, provided the maximum aggregate amount does not exceed $2 million. That means up to $2 million can be earned by achieving just one Schedule B bonus criteria (ie. Calder Trophy win). Schedule B bonuses paid by the team count against the team's salary cap.

Following is a list of Schedule B bonuses that are automatically paid by the league and likewise the categories that can be negotiated between the team and player. 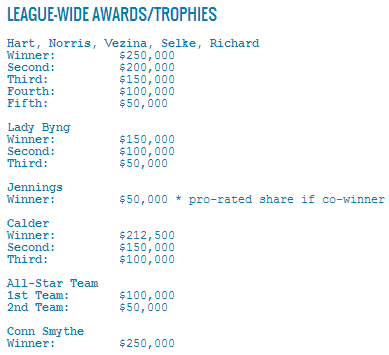 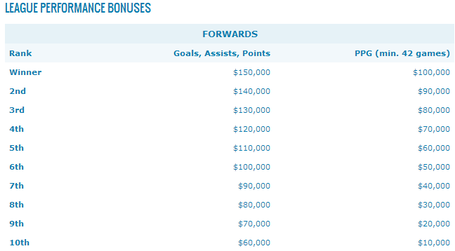 Can Snow Make the Sale?

So now that we have a clearer understanding on how ELC’s work. Let’s assume Garth Snow is ready to sell Long Island/Brooklyn to Jiri Sekac.

Just a few short months ago, ex-Sabre, Islander, Canadian, Thomas Vanek turned down $50 mill to play on the left side of John Tavares. Many believe he’s destined to land in his home-college town of Minnesota, also where his wife is from, but did his playoff performance change that? Many believe it did. Since he didn't sign, there is a possibility of that position being filled through Free Agency and not from within. We are exciting for the rise in Brock Nelson, Ryan Strome and Anders Lee but are they ready for first line duties and are they better off kept together?

If Garth is able to lock up Dan Boyle, it only creates more competition on the blue line which Snow has shown he has no problem doing with that position. This is something Snow can really sell to Walsh. We saw how PA Parenteau turned into an NHL regular because of this opportunity and that was during the beginning years of John Tavares. Now moving closer and closer to leading the league in points and being a 100 point player, Sekac can only benefit from this. However, should Garth Snow sell that position to Sekac or sell the team as his best opportunity to be a regular NHL’er?

With the Islanders expecting to make the playoffs next year, that’s a pretty valuable spot to give up to an unproven prospect. I do believe in providing opportunity for players where there is chemistry. Snow has proven it works. (See: Parenteau, Moulson). Yet, is it worth the risk again when Garth Snow has much to prove this off-season. With a new building one year away, opportunity to live a suburban or city life, and become part of the rising prospect pool Snow has built; it’s definitely something Mr. Walsh and Sekac should consider. Garth mentioned just after the season ended that he would consider building up the wings this draft. His focus has been mainly on Defense and the Center position since 2008. This could be an opportunity to land a prospect then trade a pick for other assets. Let’s consider something though. Currently, the Islanders wing position looks like this for the 2014-2015 season. Assuming your Centers are Tavares, Strome, Nielsen, and Cizikas, you’re looking at Okposo, Bailey, Lee, Nelson, Grabner, Clutterbuck, McDonald, and Martin all on the wings. Someone will have to be moved to make room for Sekac and if I had to guess, it could be one of Bailey or Grabner. My guess is Bailey before Grabner.

So Islanders fans. How else can Garth Snow attract the 22 year old prospect? Is it worth the risk or should Garth stay the course. Comment, share, argue or agree. I’m interested in your opinions.