The Islanders are playing a little better right now, but careful what you infer from it.

After bottoming out around the Olympic break and returning from that intermission without John Tavares, the New York Islanders have suddenly gone 7-2-1 in their last 10. It feels like we've seen this movie before. But then we humans like to group experiences into categories and narratives, because details are hard while stories are fun.

Any time a team goes on a run after it's already been (essentially) eliminated from the playoffs, the natural question is: Is it a mirage?

This line of inquiry usually takes one of two paths.

1. "They're Playing Loose, Pressure's Off"

The first is the age-old, purely narrative-based path of, "Oh sure, now that the pressure is off, they start winning and stuff." Accessories to this theory, which is never provable but always has some base in reality or previous experience, usually include things like players playing for contracts, players feeling loose because they're not playing for contracts, young players just excited to be here, and young players playing for jobs.

The Isles might have a few of the latter two. They have no significant "contract year players." They're also surging without any members of what was the top offensive line in the league for much of the season (John Tavares, Kyle Okposo, Thomas Vanek).

2. "Their Luck Has Turned, They Were Due, But They Aren't This Good"

Granted, no team is 7-2-1 good over the course of a season; that's an unsustainable rate -- and that fact alone should give you pause and realize that any 10-game stretch is marked by variables that could easily swing the other direction.

For example, over the last 10 games the Islanders have two one-goal regulation wins, a shootout win, a couple of two-goal wins, and two three-goal wins (against last-place Buffalo and the reeling Canucks in a dramatic comeback). You can dig into any number of those games and see how things could've gone a different way and left them, say, 3-4-3.

So in a sense, this second line of inquiry is also a bit narrative-based -- after all, you're trying to explain why a team's "luck" has changed. But really it's more likely to deal with whether a team is playing about as poorly as it has all season but suddenly getting good goaltending or good shooting luck and special teams, etc. You can at least test this theory by checking out a team's percentages.

You might guess, I don't put much stock in the first theory. I do believe the whole "no pressure" thing happens, and it like any mental side effect can be a factor, but I don't buy it as a dominant factor for any team playing well -- or rather, collecting wins regardless of how they are playing -- over a sustained period. It makes sense for frustrated fans though.

Far more common, and borne out over season after season of history, is that in a sport and league where the margins are thin, ups and downs, streaks and lulls all happen throughout the season. We humans usually try to fit them into a narrative of some sort.

I don't believe Ryan Strome is collecting points because the pressure's off; I believe he's collecting points because he's getting regular minutes (two power play assists last night) and he's good at hockey. I don't believe Josh Bailey is putting up points because the pressure's off, I believe it's happening because he's getting first-line minutes and power play opportunities at the same time the Isles power play has improved. And also the moon says it's April, which is Bailey's astrological sign or something.

Anyway, do the objective metrics say the Islanders are truly playing better lately, or is it just a good run of luck?

The underlying stats, captured nicely in charts at ExtraSkater suggest this: They're not getting lucky. In fact, they're playing similar to other peaks this season and last, which is in the NHL's vast middle section of average teams (by possession stats), except they continue to have the lowest save percentage in the league.

Here is a chart of the Islanders 5-on-5 Fenwick close over this season. It's been under 50% just once since Feb. 6: 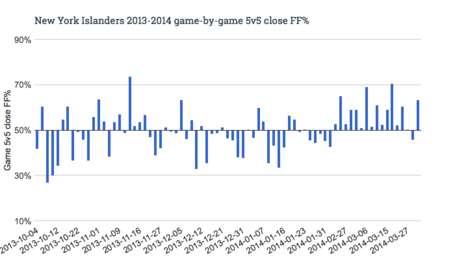 However, a caveat: See that other mostly positive 12-game stretch on the left side of the chart from late October to early November? That featured two shootout wins (Ottawa, Detroit), a nice regulation win over Boston and seven regulation losses, including the disaster against the Capitals.

But those are one-game instances charted in bars. How has their trend line looked? Here is their 10-game rolling average in 5-on-5 Fenwick close for the season. It too shows a dramatic rise since February: 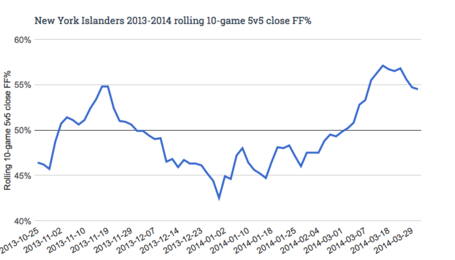 Mind you, this data excludes much of the 6-0 slaughter by the Wild, because Fenwick Close only accounts for when the game is "close," and that game became a laugher before you could say "what's a Corsi?"

Alright fine, but surely some of this is shooting luck? Goaltending finally behaving? Not really. Their rolling 5-on-5 PDO, which is just a combination of save percentage plus shooting percentage (so the higher, the ostensibly "luckier" or at least better your goaltending and shooting), is as low as it's been all season: 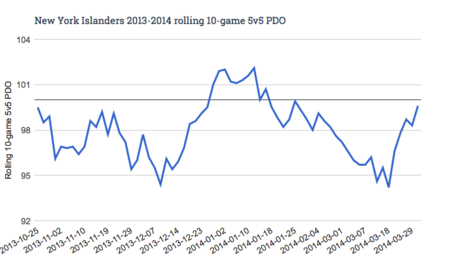 Granted, special teams have produced better lately, but overall the Islanders are truly playing better in the close-and-competitive situations during this run.

Whether that's to do with mental stuff, or the subtraction of some weaknesses (ahem, Andrew MacDonald in a #1 role, Brian Strait in a minutes-muncher) is up for debate. But like the 10-game win-loss record itself, it's still ultimately not a lot of data, as snapshot samples of 10 games doesn't add up to much. To say this uptick in underlying stats fully explains a 7-2-1 run would be like saying the Isles beat New Jersey because they were better (it was a shootout, a coinflip) and lost to Tampa because Tampa was better (also a shootout).

Some little things have gone their way, they've lost a few great players (Tavares, Okposo, Lubomir Visnovsky) but also have lost some possession-draining players (Andrew MacDonald as first-pair guy, Brian Strait, Eric Boulton). The young callups, to a man, have at least held their own. Whether they can do that over the long term is, well, how was Bridgeport doing with them?

So this is a long way of saying enjoy this for what it is, but don't read too much into the performance and don't put too much mental or "pressure" narratives into the results. Ten games is nothing, either way. It's just more focused because of the opportunity that's gone and because of how little is left in the season.

Certainly captain John Tavares' words from this week are worth heeding:

"Obviously, we're not playing for a whole lot right now. We can't be fooled with the way we finish here because of the way the rest of the season went."

No matter what time of year a hot streak or a slump hits, it's always a matter of what can be sustained for that "rest of the season" part. So fans are right to be cautious and right to search for explanations, but thus far there's just not much to be gleaned yet other than: They are indeed playing well right now. They've played this well before. They haven't shown they can play this well on the aggregate of a full season*.