The game didn't mean much, even in lottery terms -- though the Isles leaped over Calgary for 26th place, while Florida stayed within falling distance of 29th Edmonton -- but the New York Islanders and Florida Panthers at least put up a fight during the home team's 4-2 win.

The game began with a physical bang when NHL debutante Jonathan Racine absolutely leveled Cal Clutterbuck on his first NHL shift. Racine was called for his first NHL penalty (interference) on the play -- Clutterbuck hadn't yet reached the puck -- and the ensuing power play produced a goal for each side.

The only two goals from the first half of the game came in that early stretch, 45 seconds apart. The Panthers opened scoring on a great shorthanded breakaway by Quinton Howden after Matt Donovan lost a Frans Nielsen pass at the offensive blueline. But the Isles equaled when Travis Hamonic wristed a shot through traffic after a faceoff win.

That was all the scoring, but certainly not all the hitting, until the Islanders pulled away with two goals in the second half of the middle frame, each a glaring Panthers defensive mistake. Josh Bailey, Matt Martin and Mike Halmo (his first) had the other goals, while Brandon Pirri added one for Florida with four seconds left in the game.

The Panthers defense overcommitted to leave Islanders forwards alone in front of the net not once, but twice to allow the Islanders to pull ahead. On Bailey's goal, they chased Colin McDonald after Ryan Strome did well as the hub of a give-and-go, leaving Bailey with a point-blank shot that even he couldn't pass up.

On Matt Martin's goal, McDonald again assisted after outracing Racine for a loose puck down the right wing boards. Racine pulled out of the chase and played the angle well, but for some reason Erik Gudbranson also pursued that angle -- all the way behind the net -- leaving Matt Martin incredibly wide open to slam home the rebound.

Matt Carkner found himself in fights not once, but twice -- each ostensibly related to an initially benign check on Scottie Upshall (a pest himself) that went awry when Carkner's stick swung up and hit Upshall in the face after the check was over.

After the whistle for the high-sticking penalty, Erik Gudbranson rushed Carkner, and Carkner quickly took the invitation, landing several punches. On the Panthers broadcast, ex-grinder Bill Lindsey mentioned about 10 times (no joke) that he thought Gudbranson didn't deserve the instigator penalty he received because "he didn't drop his gloves first." But, well, don't bring a knife when you're starting a gunfight, you know?

Since Carkner had his way with Gudbranson, while the young defenseman was still in the box for his misconduct, Krys Barch got Carkner involved in another fight. This one was a little more more even, but Barch still never landed the vengeance punch he was looking for. Basically, Carkner got in various Panthers ruffians' kitchen and escaped with all their Revere ware.

In his 13th NHL game, Mike Halmo notched his first goal and NHL point with a goal worth telling his grandchildren about. Racing down the left wing on a 2-on-1, he faked pass enough to buy himself space, shot hard on Scott Clemmensen, then batted the rebound in out of mid air.

Big congrats to Halmo, an undrafted signing after a long junior career. He's unlikely to log much NHL duty in his career, but he's doing what he can with the opportunity injuries have created for him. And now he has a moment he'll never forget.

An enjoyable moment for Hamonic fans and Sean Bergenheim critics alike: Bergenheim was sprung for a breakaway in the second period, but Hamonic calmly caught him from behind, lifted his stick, prevented any shot at all, and won possession with time to find an outlet. Nice.

Kevin Czuczman played 22:05, third most on the team behind Hamonic and Calvin de Haan. The Czurch man might be good, eh? He's feeling his way, finding out what he can get away with (the occasional risky pass is still in his arsenal), but it's fun to watch him adjust.

Pinch me if you expected that in April the Islanders top shooters in a game would be Cal Clutterbuck (6), Colin McDonald (5) and John Persson (4). Persson managed his in just 11:00, too.

Howie Rose took the opportunity late in the season, with championship banners of yore hanging in the rafters and drawing the MSG camera's pan, to lay into Nassau County. It was quick, but it was effective, unleashing decades of frustration at how a county turned the home of the NHL's last dynasty into a place scrambling for a minor league tenant.

Watch the video and have fun with that over here. 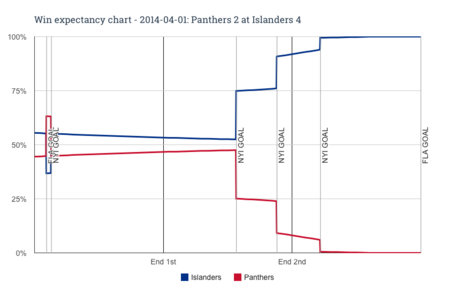 The Islanders play again tomorrow night in Ottawa, another encounter with a non-playoff team, though the Senators at least still have an outside shot.