There's an AMac for That! Why your team should pay a handsome price for Andrew MacDonald

You need this guy.

Share All sharing options for: There's an AMac for That! Why your team should pay a handsome price for Andrew MacDonald

More people have talked about Islanders defenseman Andrew MacDonald in the last two weeks than they have for his entire six-year career, spent entirely on Long Island. He's a popular trade target for teams looking to upgrade for the playoffs.

MacDonald's game and attributes have been picked apart, scrutinized, probed, criticized and condemned by writers across the internet. Any NHL general manager looking to acquire him has a wealth of startling statistical scouting information right at their fingertips.

More: No but seriously, the Flyers have acquired MacDonald

Well, as some of the world's most astute and plugged-in observers of the Islanders, Lighthouse Hockey is here to tell those GMs DON'T LISTEN TO THESE GUYS! ANDREW MACDONALD IS PERFECT FOR YOUR TEAM AND HERE ARE SOME REASONS YOU SHOULD OFFER UP YOUR BEST PROSPECTS AND HIGHEST DRAFT PICKS FOR HIM.

1. He plays a lot of minutes

MacDonald is among the league-leaders in Time on Ice. As Islanders fans we can tell you, sometimes, it seems like he never leaves the ice. Every time something happens on the ice - a goal against, a key turnover, an odd-man rush or whole minutes in which the Islanders are pinned in their own zone - MacDonald is right in the thick of things. Wind him up and watch him go.

2. He blocks a lot of shots

MacDonald is also among the NHL's most frequent shot-blockers, the only tried-and-true measure of a player's toughness and tenacity. Whenever MacDonald sees an opposing player with the puck, his go-to move is to slide on the ice immediately and block the shot. Sometimes, he tries so hard to block a shot, he slides right out of position or into a teammate. But that shows just how much fire he has for sacrificing his body.

3. He broke his jaw and played with chin guard for, like, a month

Among his on-ice talents, MacDonald can also spur sales of your team's stuff by enticing buyers with his sensual, smoldering modelling techniques. 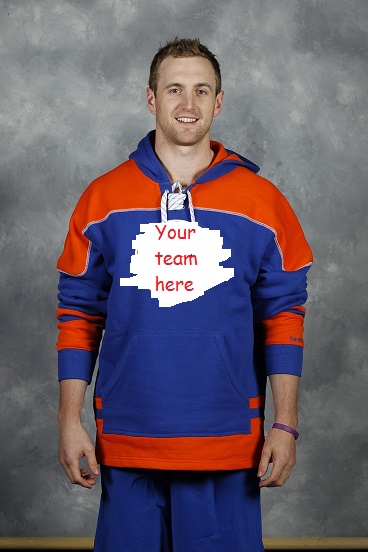 You know who else is from Nova Scotia? That's right, this guy. Oh, and this other guy. They're good, so you know AMac has got to be good.

His contract is, anyway. (Not him, in fact, we'll bet when the boys go out for pops after the games, MacDonald picks up the tab for his pals. He's just that swell of a guy.) MacDonald's salary for this season is $550,000, which is chump change for even the most cap-straining club.

Instead of all that worthless garbage, wouldn't you rather spend that money on Andrew MacDonald? Of course you would.

YOU SOLD ME. HOW MUCH?

Rumor has it that Islanders GM Garth Snow is looking at getting two piece back in trade for MacDonald. So if you're an opposing general manager, please select any two of the following options:

So what are you waiting for? Don't wait and let your divisional rival trade for Andrew MacDonald before you! Do it now!
___
After all the blog posts, I started feeling bad for MacDonald. Good luck to him wherever he goes.