Another one-year extension for the breakaway specialist.

Eric Boulton's New York Islanders tenure will last at least one more year. His agent tweeted the news Sunday morning with this quip:

Congrats to #Eric Boulton on signing a 1 year extension with the @NYIslanders. On way of reaching goal of playing till 50

Arthur Staple of Newsday added some sourcery to the "wait, what, now?" report:

While the debate about carrying an enforcer rages on among fans -- and we've seen the Isles shift on how necessary it is over the years -- the team clearly likes Boulton enough to keep him rather than shop for another similar player on the clearance bin each summer. Those who watched "NHL Revealed" or saw the Isles' "who's the funniest teammate?" segment this season got a sense of how enjoyed Boulton is around the team -- almost a necessity for keeping your job as an enforcer in this era. 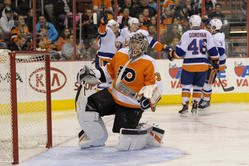 Because in small samples, even Eric Boulton has his day.

Last summer Boulton's resigning was announced in May, in a surprise. This year the news comes out in March. Watch out for more Boulton news come January 2015.

Boulton will turn 38 in August. The last two seasons, he's played in roughly a third of the Islanders' games, usually against predictable opponents who also dress a fighter or two. It's clear the Islanders like having one on the 23-man roster. That role will remain Eric Boulton's.

And opponents, watch out for this man coming out of the box: