In accordance with the prophecies, The Reverend has arrived to help the flock. - Harry How

In a word, Brock Nelson is REALLY REALLY good.

I think most Islanders fans are impressed by the rookie, what with his 10 goals and 9 assists, ability to fit alongside pretty much any line-mates, and how he doesn't seem at all overwhelmed by the game. But I'm not quite sure most Islander fans understand how good the rookie has played so far.

Brock's playing time this year has actually been a bit odd - he's basically played a little bit with everyone and hasn't stuck on a line with any particular player for long. The only forward to have played for a "significant" # of Nelson's minutes is Cal Clutterbuck, who has been on the ice for 31.05% of Nelson's EV Ice time, and Nelson has played 16.25% of his minutes with line 1, 12.28% with line 2, 9.79% with line 4, 16.41% alongside Peter Regin, and well I don't have an easy way to count the amount of time he's played center but you get the point.

For those who aren't familiar with corsi: Corsi is simply +/-, but using shot attempts instead of goals (also known as shot differential). It is essentially a proxy measurement for possession of the puck in the offensive zone and for scoring chances. As a %, Corsi measures the % of shots that are directed toward the opponent's net as opposed to your own while a player is on the ice. A Corsi % above 50% means more shots are directed at the opponent's net than your own and that almost certainly the team is spending more time in the offensive zone than the defensive zone.

Now that we've gotten that out of the way, let's look at how Brock Nelson affects his teammates' corsi - that is, whether he improves or worsens their ability to get the puck directed toward the opponent's net: 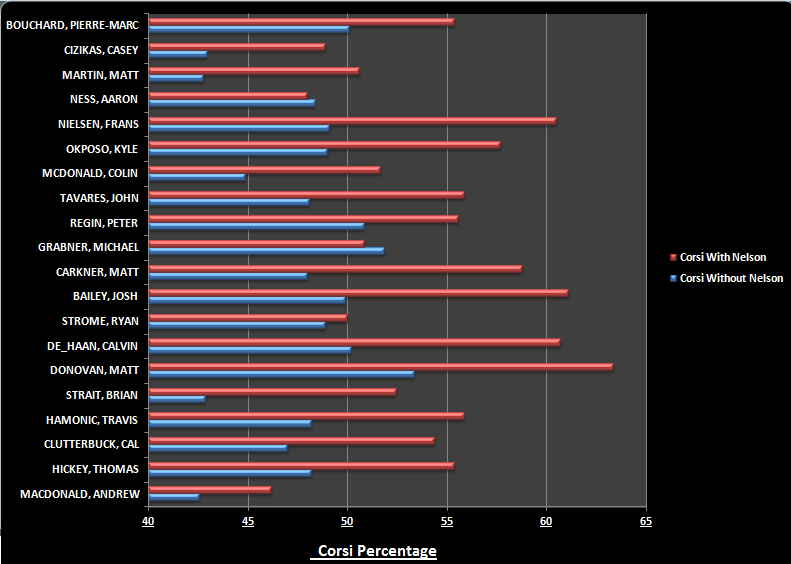 Figure 1: Performance of all Islanders with approximately 50 minutes on the ice with Nelson at 5 on 5 with and without Brock Nelson. NOTE: the players at the bottom of the chart spend the most time with Nelson on the ice.

So yeah, my title was a freaking understatement. Nelson MASSIVELY improves his teammates ability to keep the puck in the O Zone. The only two players to actually perform worse with Nelson are Aaron Ness and Michael Grabner, and both are basically identical with and without Nelson (So this isn't really an argument for separating the two players - Grabner with Nelson still performs at a pretty good level).

By contrast, other player #s are freaking hysterical: Donovan and deHaan perform at a top 5 D men level with Nelson on the ice, while Frans Nielsen and Josh Bailey instead perform like Patrice Bergeron. John Tavares and Kyle Okposo perform at an elite possession level as well with Nelson on LW (Hint: If you want to replace Vanek with someone, this might be a good pick).

Really the startling thing about this graph is simply this: With this type of effect on his teammates, why the hell is Nelson 11th amongst Isles forwards in Islander EV Time on Ice per game? (12th if you include Moulson, 10th if you exclude Strome). He's playing at seemingly an elite level - if the team wants to improve, it should probably play him more often.

EDIT: Someone in the comments asked about ice time and sample sizes, so here ya go: 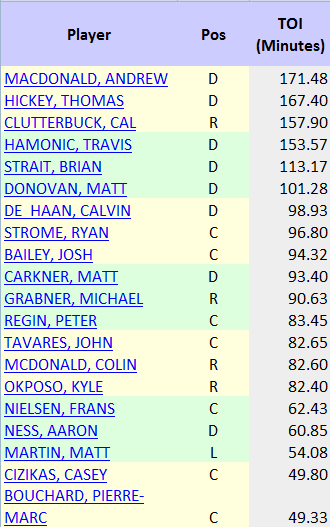 You usually want at least a 100 minutes (and usually more than that!) before you do any of these analyses, but the #s here are still decently sized (my cutoff was basically 50 minutes), and the overall effect is pretty notable. You don't have enough sample to conclude that Brock + any particular forward is a dynamite combo by itself, but you DO have enough sample to note that Brock definitely is a positive influence on pretty much all his teammates.