Again, I've been tracking Islanders Neutral Zone Play this year and finally have on-ice results through the Olympic Break (60 games). The following 3 graphs generally sum up my results - I don't have time for a big post yet again, so this will be just a key data dump: 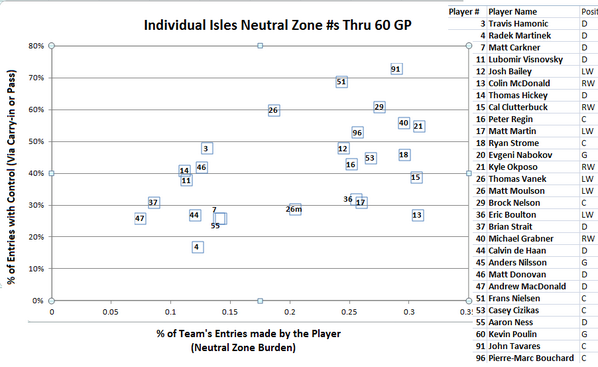 This graph above shows the % of entries made by each player with control on the Y Axis (in other words, % that aren't dump/tip-ins) and the x-axis shows the role of each player in doing so. So a player on the right side of the graph takes a higher burden at getting the puck into the offensive zone than a player on the left side (so naturally, D Men are all on the left side). Being in the top right shows you're an elite NZ Player, so of course John Tavares is there of course.

Not much has changed here since our last check in: Tavares is still a god at carrying in, Nielsen is close behind, Vanek doesn't make entries any more than Moulson did and Colin McDonald still takes too many of his line's entries and dumps on far far too many of them. Brock Nelson meanwhile has had his carry-in #s rise above the 60% line (3rd on the team) while Matt Donovan is over 40% (which is good for a DMan).

Interesting to note on the Defensive side that the Isles only have two DMen who basically take a completely passive role in the neutral zone - Andrew MacDonald and Brian Strait - and both are now on the same pair. With those two on the ice together, Isles' forwards have basically no help getting the puck into the offensive zone. 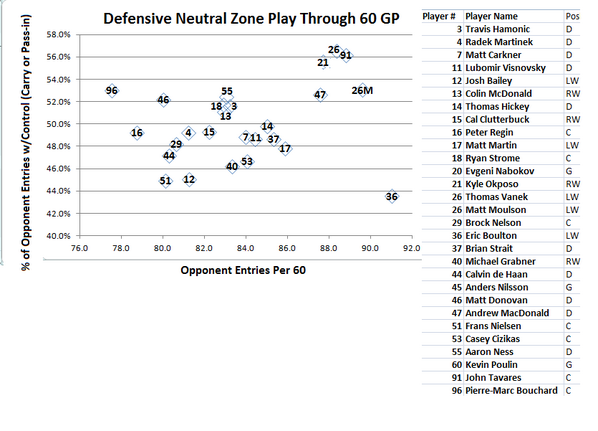 This graph above shows how OPPONENTS do with each individual Islander on the ice. Being at the top right of the graph is BAD - it means that opponents are entering the Isles' zone frequently with a player on the ice AND are doing so via carry-in - while being in the bottom left is good.

If you recall, last time we checked in, Calvin de Haan was oddly in the bottom right corner. With a greater sample, he's settled into the bottom left as the Isles top D-Man. Also Frans Nielsen is ridiculous at defense. And Amac......is AMac.

So let's put together the O and D #s onto a single graph: 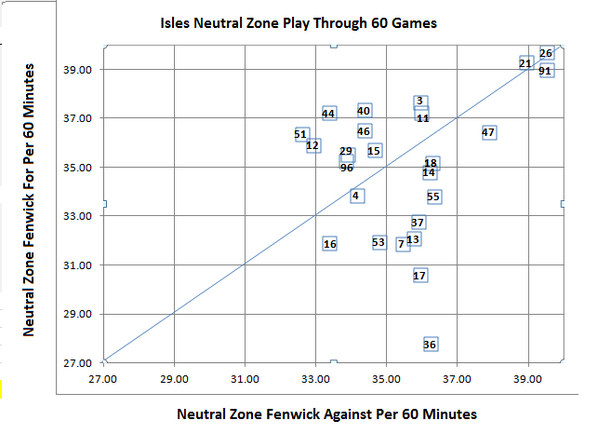 (For those curious, the #s are "Neutral Zone Fenwick" - which measures the expected # of shots on goal and missed shots per 60 based upon the number and type of zone entries while each player is on the ice.)

The diagonal line is the break-even line: All Isles above that line are winning the neutral zone battle, all Isles below that line are losing.

So again you can see your elite Neutral Zone forwards are clearly Nielsen, Bailey, Nelson and Grabner, with Clutterbuck also in the green (and the departed PMB). You can debate how much of a role Bailey and Clutterbuck have in that (I'd say not much), but so far so good. Meanwhile, deHaan, and Donovan are dominant as D Men in the Neutral Zone, while Hamonic and Lubo are also great. There's a very very solid D Corp here, with just a few boat anchors holding the team down.