The Islanders' dynasty era netminder is a legend because of his win total and his battlin' style. But that's with 30 years of hindsight and history behind him. What would hockey media say if he wasn't yet a legend?

For a period of five years, goaltender Billy Smith was nearly unbeatable in the post-season and backstopped the Islanders to four straight Stanley Cups and five final appearances. The way the league played was very different in that era, and the stats associated with his career aren't always impressive. But somehow, come springtime, he always found a way to win or keep the Islanders in games. Tales of his battles are still told on Long Island.

Of course, if you weren't rooting for the Islanders, your view of Smith might be a little different. To opposing teams and fans, he was an arch villain; a slasher, a fighter, a trash talker, an agitator. You wanted to see your team win mainly because it meant Smith getting his. The fact that he won so much made him even more odious.

Smith wasn't the first player to divide opinions and he certainly wasn't the last. Norris Trophy winner P.K. Subban, recently incited fans and media by excitedly celebrating an overtime goal he scored against Ottawa. Phoenix goalie Mike Smith nearly took the Coyotes to the Stanley Cup finals in 2012, but is known more for being among the league's most frequent and conspicuous divers.

Whenever dynamic players like Subban and Smith do something flashy, hockey's social media lights up, with everyone watching the game chiming in and commenting on the latest happening. Most hockey fans on Twitter follow the same accounts, so when an incident occurs, the conversation usually turns from "what just happened" to "who said what about what just happened."

After the Subban OT goal, Habs Eyes on the Prize's très rapide gif-meister Marc Dumont tweeted a bunch of other "unnecessary" plays by great players that somehow go unmentioned whenever Subban makes a splash. One of them was of Billy Smith.

The conversation between myself, Marc and Andrew Berkshire made me think: what if Billy Smith played today? What if he was a current player, possibly a winner of one or no Stanley Cups, who played his unapologetic in-your-face style in the era of Twitter? What would some popular social media voices have to say about him?

Let's speculate. Remember, these are the professionals. I can't even imagine what fans would hurl at Smith over the internet.

Smith plays keep away in the final moments of the 1981 Stanley Cup finals:

Smith, um... looks for a call on Edmonton's Dave Lumley during the 1983 finals: 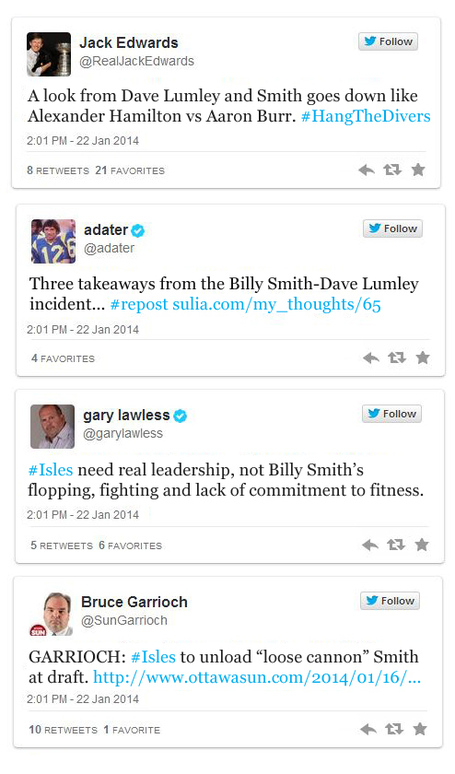 Smith wants Lanny McDonald all to himself in 1979: 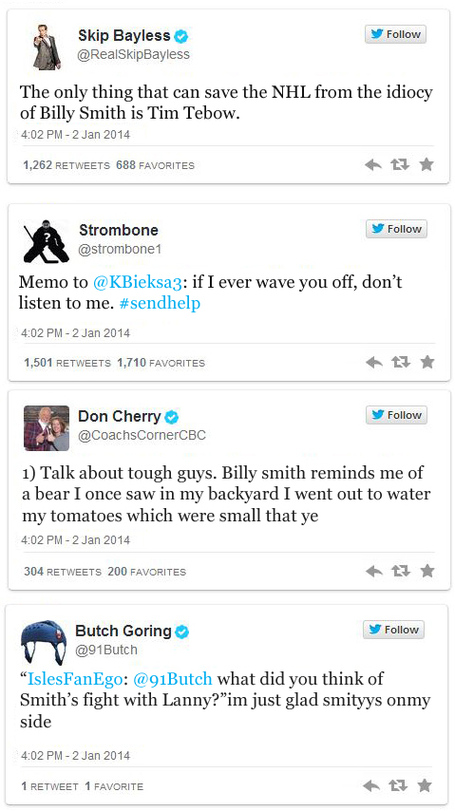 These are all fake. If this was Barnes and Noble, they'd be filed in the "historical fiction" section.