One-stop-online shop will answer every question about this out-of-the-blue epidemic.

A new website by the Center for Disease Control aims to assuage the fears of NHL players and fans who have watched an epidemic of mumps overtake the hockey league.

Concerned fans can log onto www.cdc.gov/NHLMumps for hourly updates on the spread of the ailment through the NHL as well as information on how teams can protect themselves from getting mumps and what teams or cities might be next. Fourteen players on five teams have be diagnosed with mumps since the beginning of the season and the CDC is partnering with the league in the hopes of stopping the outbreak before it hits all 30 franchises.

'We have developed this website to track the spread of mumps from player to player," said Fiona Figeroua, PhD, a CD biologist who oversees the site. "A lot of hockey fans are shocked that a disease thought to be under control has suddenly take over the NHL.

"At the CDC, we're shocked there's only one disease going around the NHL and not a whole bunch more. But, whatever. Mumps it is."

"We recommended (Tanner) Glass be placed in a sealed vault deep underground to protect all of New York, but it was too late. - The Center for Disease Control

The Anaheim Ducks were the first NHL team to have documented cases of the mumps this season. Defenseman Francois Beauchemin and winger Corey Perry both missed games and were quarantined from their teammates when they were diagnosed with the virus. Since then players on the St. Louis Blues, Minnesota Wild, New York Rangers and New Jersey Devils were discovered to have contracted mumps.

UPDATE: Sidney Crosby of the Pittsburgh Penguins is a latest player to be diagnosed with mumps. An immediate blood transfusion from NBC Sports NHL analyst Pierre McGuire is being arranged.

The CDC's website will use a mathematical model to predict the next landing spots for the virus and lay out what steps the teams can take to prevent getting it.

"We thought the mumps were contained in the Western Conference," Figeroua said. "But once the Rangers' Tanner Glass got them, we realized it was moving east. We recommended Glass be placed in a sealed vault deep underground to protect all of New York, but it was too late.

"Now two Devils have it. It's only a matter of time before Philadelphia, Washington and Carolina probably get the mumps, too. Don't say we didn't warn you."

The website (click the screenshot below for a preview) will also have studies, charts and Frequently Asked Questions for people scared and surprised that a disease with a vaccine is somehow back in circulation.

"Vaccines don't always work," says Figeroua. "There's about a 20% chance of still getting it and when you're in such close contact with others, you might as well be skating over a petri dish.

"This site will help fans and players understand how mumps spreads, which players are most at risk and which arenas will need to be burned to the ground before they infect their respective cities and, eventually, the entire world." 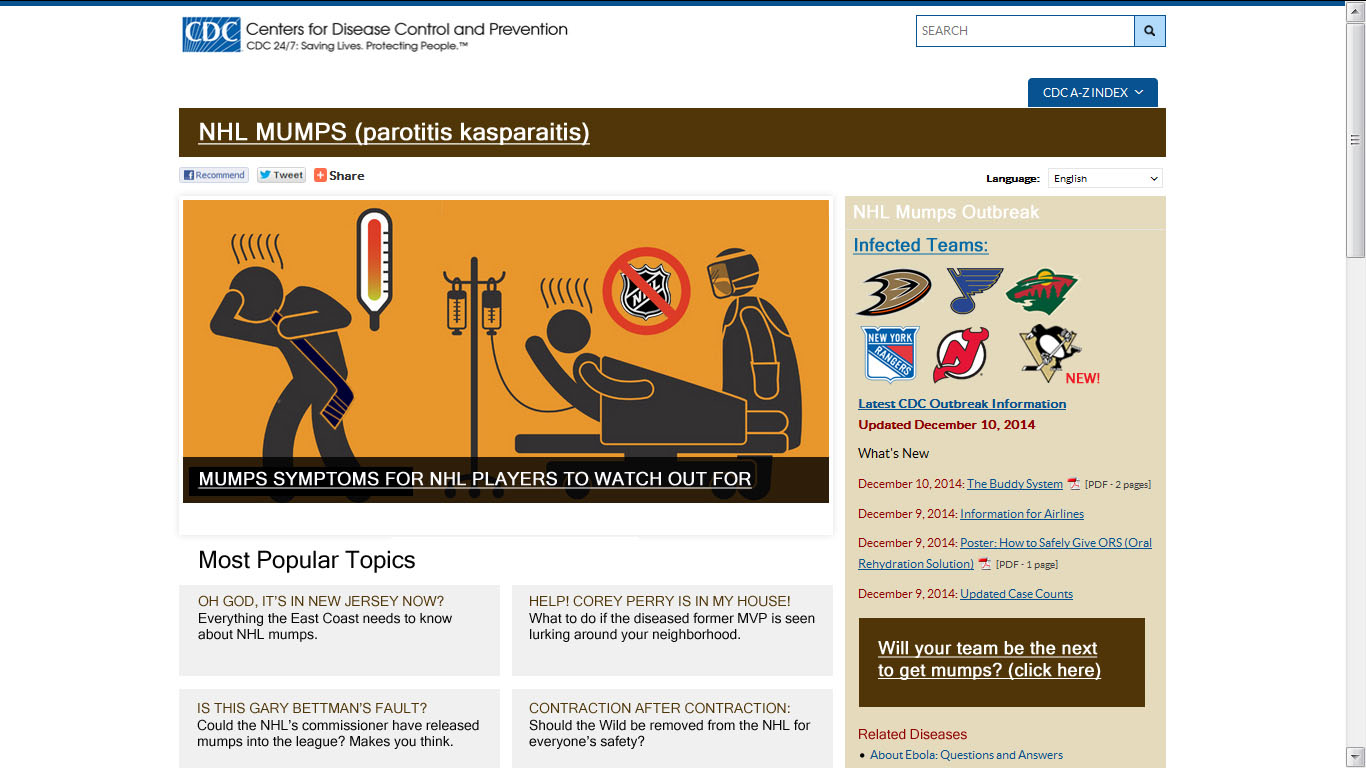 This is fake, there is no CDC website on NHL mumps. But you should definitely still be afraid if you see Corey Perry walking around your neighborhood.