Neutral Zone Analysis through the first 15 games of 2014-15: The Isles are improving.

Once again, I'm again tracking the Isles' play through the neutral zone this year. I've been posting the game to game results on my own Isles Analytics blog, and two weeks ago I wrote a quick recap of what the Isles had done through 8 games. But now that we've gotten 15 games, I wanted to revisit the subject now that I have enough of a sample to talk about individual players.

If you don't know what Neutral Zone Tracking and Zone Entries are, I'd encourage you to read my intro post about them, but if you'd rather not for some reason, I'll explain quickly here:

After 8 games, the Islanders were winning the possession battle despite fractionally losing in the neutral zone, a style of winning that was probably not conducive to long term success. They also were being very conservative with the puck, preferring to dump and chase far more than in previous years, when they were more about trying to enter the zone via carry or pass-ins.

Seven games later, things have changed quite a bit. The data below does not include yesterday's game vs. Florida, but even with only seven additional games the Isles numbers have greatly improved in the neutral zone. The Isles are now at 51.9% Neutral Zone Fenwick Close*, which means they're winning the neutral zone pretty convincingly.

*Neutral Zone Fenwick is a measure that takes the results of a team/player in the neutral zone and estimates what we'd expect the player/team's fenwick to be from those entries.

The team is now carrying in more than opponents, although the percent of team's entries into the offensive zone by carry-in or pass-in still isn't great (42% In close, 43% overall). Opponents however, are now getting carry-ins only 41% of the time. That's pretty great.  Meanwhile, against the Kings, Coyotes, and Avs, the Isles seemed to start carrying in a lot more frequently, so those numbers should improve if this is a real trend.

So yeah the Isles are winning the neutral zone with a little less than a fifth of the season gone. But how have the individual players performed?  Now that we have 15 games, and as we start a crazy 7 game in 12 days stretch, we can take a look. That said, our sample size is still not huge, so remember that: 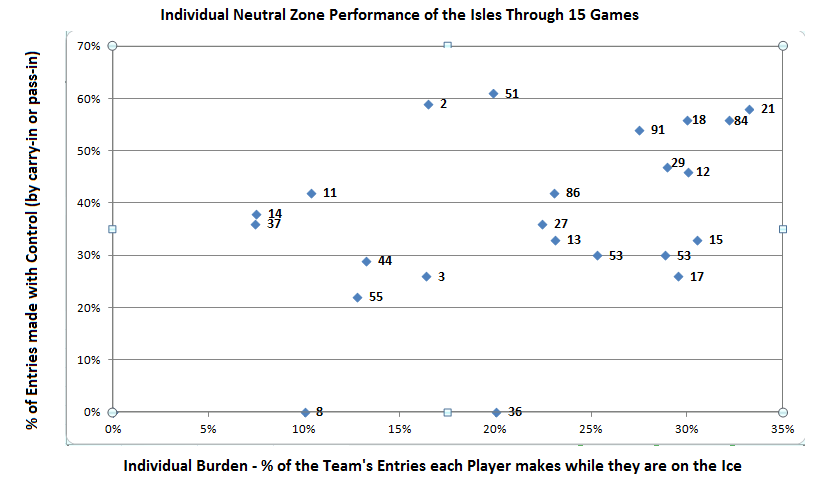 The above graph shows individual neutral zone numbers for every Islander this year. The x-axis shows how big a role each player takes in trying to get the puck into the offensive zone - so of course the D-men have lesser roles or burdens than forwards - while the Y axis shows what percentage of a player's entries are with control - by carry-in or by pass-in.

Again, this still looks a lot different than last year, as many Islanders still aren't carrying near as much as last year. That said, you'll note Nick Leddy has a ridiculous 59% carry-in rate, the highest of any D-man I've ever tracked (Mark Streit used to be at 55%). He is ridiculous.

That said, individual efforts do not tell the whole picture in the neutral zone. After all, if you carry in a ton, but allow a lot of carry-ins as a result, it may not be a positive thing after all - this has been a problem for John Tavares the past two years, for instance. So let's move on to overall on-ice neutral zone numbers:

I've broken the D up basically into pairs.  As you can see, the Isles basically have 4 plus neutral zone defensemen:
1. Leddy, whose great success has come from the team out-entering opponents while also beating opponents by carrying in at a decent clip;
2. Boychuk, who also succeeds from out-entering opponents but who doesn't have as much success in entering with control
3. Visnovsky, positive for a 3rd straight year, again by being elite at denying opponents the chance to carry-in; and
4. de Haan, who like Visnovsky, wins the neutral zone by being elite at preventing opposing carry-ins.

All four guys above are really plus.  And given the current pairings, we expect them to drag up Hamonic and Hickey, both of whom had terrible neutral zone results together but have been good ever since.  Strait was nowhere near as bad as he was last year by the way, although he's had the advantage of most of his games with de Haan or Leddy (although he and Reinhart were a sieve).

Okay, so how about the forwards?

Again, I've broken the players into lines. The first line's mediocre numbers are getting much better of late, and will only be helped by Kulemin replacing Conacher (if Bailey doesn't take his spot next game after the Florida game). Worth noting that the first line, while having issues out-entering opponents, is preventing carry-ins at a far FAR better rate than they have the last two years, even WITH Conacher. Their own carry-in % is down, but opponents are dumping in even more, which is a promising sign.

Kulemin has been freaking awesome.

Kulemin has been freaking awesome by the way, promoting carry-ins while drastically reducing opposing carry-ins. He's been great with everyone he's played with so far.

The Nielsen line has been pretty strong in the neutral zone for two years, and this year is no different. They don't carry in as much as the first line, which is a bit surprising given that both Nielsen and Grabbo are historically strong carry-in players and Bailey is usually pretty solid, but they are denying opposing carry ins and out-entering opponents pretty damn well.

The Kid line has been even BETTER in the neutral zone actually. With Ryan Strome on the ice, the Isles actually carry-in on 50% of their entries while out-entering opponents and allowing carry-ins only 43% - Brock has similarly good numbers.  Strome didn't have the best neutral zone numbers last year, so this is really encouraging.  Meanwhile, Anders Lee has video game numbers again, albeit in a small sample size.

The fourth line however sees a major drop off - particularly in the % of the team's entries via carry-in or pass-in with them on the ice - a drop of basically ten percentage points.  And its not like the fourth line is preventing carry-ins any more than lines 2 or 3 either - it's just dumping like crazy.  This isn't surprising - these are the worst players on the team and their neutral zone play shows it.

Overall, the team's neutral zone play is pretty good for 15 games in, with two lines and four D who are really really good in the Neutral Zone, and only one line really that's a liability.  That's what's led to our great possession dominance so far - let's hope the trend continues as the guys grow more used to their line combinations.