Has the offensive zone play covered for some neutral zone worries, the 6-2 record obscuring dump-happy play?

As you all probably know, I'm again tracking the Isles' play through the neutral zone this year.  I've been posting the game to game results on my own Isles Analytics blog, but I figured with 8 games, I can start to sum up what's been happening so far.

If you don't know what Neutral Zone Tracking and Zone Entries are, I'd encourage you to read my intro post about them, but if you'd rather not for some reason, I'll explain quickly here:

Winning the neutral zone isn't everything of course. One team the last two years, the San Jose Sharks, has basically played even or slightly below even in the Neutral Zone and has been an elite team from offensive and defensive zone play on their own.

But it does seem like the Sharks' method of winning is MUCH HARDER to repeat than simply winning the neutral zone itself.  There's a lot more flukiness in things that go on in the offensive and defensive zones (board battles, in particular).  So while the Isles' possession numbers portray a rosy picture about their future, less rosy neutral zone numbers might suggest even those are small sample flukes.

And that's the issue: the Islanders' neutral zone #s haven't matched up to their overall performance.  In close situations (score within 1 goal in first two periods, tied in 3rd), the Islanders have a 49.2% Neutral Zone Fenwick, which basically means that their neutral zone play would have us expect a fenwick close of 49.2%. Obviously, they've done way better than that, and that's due to incredible offensive zone play: The Islanders are averaging .71 unblocked shot attempts per carry-in (usual #s are .6) and .30 attempts per dump (usual is around .25).

It's possible for this to be an actual sign of a successful team, but it is more likely to be fluky than if the success was happening in the neutral zone. So what's going wrong?

Well the Isles are actually out-entering opponents at close situations (287-282) and are holding opponents such that only 47% of their entries are carry-ins, which is solid.  The problem is that the Isles aren't carrying in at a rate anywhere close to where they were in previous years.  Last year, the Isles entered the zone with possession (by carry-in or pass-in) 47% of the time; in the lockout, the rate was 53%.  This year's it's 41%!!!

Now some of this is tracker bias. I've gotten a little stingier at what I call carry-ins over the last year.  But the bias can't explain this discrepancy - it's huge!  The team is getting more and more dump happy, which is a conservative approach that tends to backfire, since dumps are so much less effective than entries with possession.  Some teams can make it work - The Kings for instance - by simply out-entering the opponents by a ton (and by forcing a ton of dumps), but the Isles haven't done that either.

Forward Entries: How Often, and by What Means

Take a look at the below chart, which shows how often each Islander makes a zone entry and by what means, and you can see some of the shift this year: 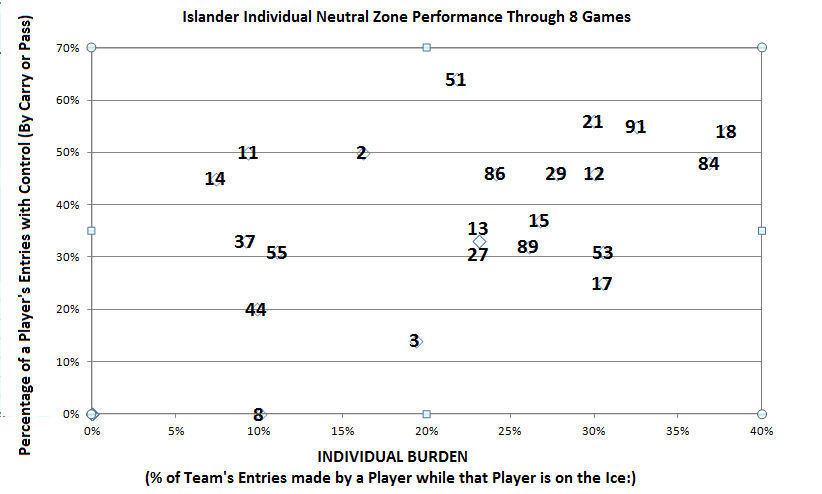 For comparison, this was last year's chart.  What differences can we notice?  Well, for one, forwards are taking a much bigger role in creating zone entries.  Last year, 3 D-Men had an entry rate of around 15%, this year that's just Hamonic and Leddy.  And Hamonic, who was a solid carry-in guy last year, has dumped like crazy this year.  That's not out of the norm for a Defenseman, mind you, but it's a disappointment from Hammer.  By contrast, Nick Leddy is posting Mark Streit Numbers.

Meanwhile, the forwards are dumping a lot more too. Last year featured 3 forwards with above 60% carry-in rates (very good), while we had 5 above 55%. This year we have only one above 60% (Frans), ,and only 3 others are basically at the 55% border.  Notable stars at carrying-in like John Tavares and Mikhail Grabovski have numbers that are way way down.  Dumping may be okay if you can deny opponent carry-ins in response and make more entries than your opponent, but the Isles are dumping to such an extent that that's practically impossible.  And the more dumping John Tavares is being outentered by a ton, so he has terrible neutral zone #s this year, which is bizarre.  Tavares had a bad nz and possession start last year as well, so hopefully he gets out of it.

This isn't meant to be all doom and gloom. Presumably, guys like Tavares and Grabovski will regress to their historical norms, and the #s will increase by a bit.  And Nick Leddy has been a neutral zone revelation - the Isles out-enter opponents 161-143 (not just in close) with Leddy on the ice, leading to a neutral zone fenwick of 53.1%.

Again, this is only 8 games of data. It's not even close to enough to be predictive at this point. But it's a rare worrisome sign in this great start, and hopefully its not a harbinger of things to come. The Islanders can make sure it isn't by improving in this area, which might make them ACTUALLY an elite team. That'd be nice and the benefit of a 6-2 start is that you have some room for error to actually take steps to become such.  And the recent returns of Lubomir Visnovsky and Calvin de Haan lately should only help in this area.  Both those guys on their own (and maybe Hamonic if he returns to last year's level) could swing things.

Here's hoping they do.