Islanders Check out Digs at Yankee Stadium before Outdoor Practice

The Islanders invade Yankee Stadium to get their bearings ahead of Wednesday's pond hockey.

Share All sharing options for: Islanders Check out Digs at Yankee Stadium before Outdoor Practice

It may be 20 degrees with a wind chill in the teens, but the New York Islanders are going to get their taste of outdoor skating at Yankee Stadium today ahead of Wednesday night's "Stadium Series" game with the New York Rangers.

Temperatures tomorrow night are expected to be in the teens -- no help from the sun then, but also no glare either, which was a complaint from Sunday's Rangers-Devils game and caused the start to be delayed.

It's good for the Isles to at least get an initial feel for the ice and the temperatures. Whether it's in a player's head or not, Jaromir Jagr is among those weary of the weather's effect, fearing that the temperatures fueled his calf injury in a Winter Classic with Philadelphia a few seasons ago.

The Islanders official Twitter is one of many media platforms hyping up the game (looks awkwardly at self), sharing some photos to set the scene.

Here is the view from the first base dugout:

The view of the #Isles dugout on the first base side from the 200 level. #StadiumSeries pic.twitter.com/QBe2H7X4S7

And here is the Isles locker room, all Yank-ified but with their new jerseys designed for this game:

#Isles gear in place in the @Yankees locker room for 4 PM practice on the ice at Yankee Stadium! #StadiumSeries pic.twitter.com/QsvlBCxXFx

Finally (for now), the Austrians -- including newly named Team Austria captain Thomas Vanek -- snap some shots to share with the Olympians back home:

#Isles get their 1st look of the locker room as @T_Vanek26 takes a photo of fellow Austrian @grabs40 #StadiumSeries pic.twitter.com/VAaqiLTI0s

And lining up to take the ice, bundled up no doubt:

#Isles get ready to head towards the dugout and then onto the ice for practice. #StadiumSeries pic.twitter.com/kuAEFhuasl

And after practice, the skate with the family: 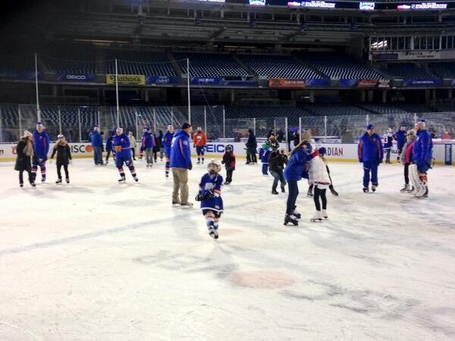