The Isles ran out of steam, or goaltending, or something in a weird one at the Coliseum.

The Boston Bruins and New York Islanders played punch, counterpunch for 40 minutes while exchanging seven even strength goals, but the Isles couldn't convert on any of their five power play opportunities, allowing the Bruins to pull away in the third period for a 6-3 win at Nassau Coliseum.

The Bruins had 18 of the game's first 20 shots on goal -- putting only one past Kevin Poulin during that stretch -- then the Islanders got the next 13 shots on their way to tying it at 1-1. That would be the pattern through the second intermission: Bruins go up one, Isles tie, Bruins go back up.

But things changed in the third, with the Isles missing on early power play-aided opportunities to tie it and the Bruins then adding insurance goals to chase Kevin Poulin from the game.

By the second intermission these teams had provided enough theater -- and shots, and goals -- for a full game, but the NHL's situation room in Toronto confirmed that yes, a game is still 60 minutes.

Alas, they might as well have called it there.

After Loui Ericksson opened scoring in the first before the ice tilted back around, Kyle Okposo faked a slapper to open a lane for Frans Nielsen driving the net. Chad Johnson stopped Nielsen's first shot, but he lifted his rebound up high to tie it.

The Isles misfired on a power play to open the second period, then the Bruins took advantage with Patrice Bergeron eluding John Tavares on a defensive zone draw and finding Brad Marchand free at the back door.

However, Thomas Hickey fought through a trip to wing a puck down low to Kyle Okposo, who fed Michael Grabner in the slot, who got his shot off around Zdeno Chara's giant stick. Game tied 2-2...for four minutes.

Riley Smith put the Bruins ahead again on a delayed penalty, a pass tipping off Matt Martin just enough to redirect past Matt Carkner and land right on Smith's stick.

The Isles would tie it one more time on a circus play. At the end of a (poorly called) Bruins power play, Dougie Hamilton was victimized at the point with an airborne pass he knocked down with his glove, but could not handle. With Grabner lurking that spells trouble, and when Grabner has moral support on his breakaway -- Okposo, emering from the penalty box -- it's more than trouble. Grabner and Okposo played catch with the puck on a 2-on-0 until Grabner made one too many last pass to give Okposo a tap-in.

The Isles looked like they might pull away this time, but chances from the top line fell short. Casey Cizikas missed a chance to feed a trailing John Tavares and suddenly the Isles and their defensemen were out for a long shift. One of them, Thomas Hickey, had a hiccup of a step while skating backward and tracking Carl Soderberg, giving Soderberg just enough room to beat him outside and create options on Poulin.

With Poulin sprawled on his belly and in the splits, Soderberg lifted it upstairs for a 4-3 lead with just 33 seconds left in the second period. Brutal.

With their second consecutive period-opening power play, the Isles had a chance to tie it a fourth time. Instead, their chances were kept out for two minutes, and the Bruins jumped them on the next shift for the game's first two-goal lead.

Brad Marchand absolutely feasted on Andrew MacDonald, pouncing behind the net to knock him off the puck and win possession coming out the other side, where he fed a falling Patrice Bergeron who got the shot off despite being knocked over by Matt Martin.

That one made it 5-3. Chara's laughably soft loft shot from the blueline was deflected in by Poulin to make it 6-3, so the Isles gave Evgeni Nabokov some warmup action for the final 12 minutes. 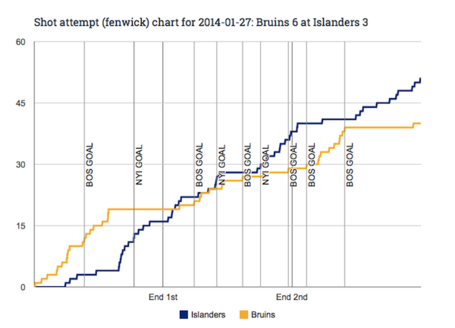 The NHL Tries to Explain Its Unexplainable Self

You know the league screwed up did a controversial thing when they send their spokesman to talk to the team's broadcast on the very next game after they screwed up. But I only feel more in the dark after Kris King's game attempt to explain to Howie Rose Saturday's overturn of Thomas Vanek's OT goal. At one point King indicated the war room trusts on-ice calls on the puck crossing the line -- huh? -- but on kicking calls their own view carries all the weight.

I think I know what he meant to say -- that they just care whether the player moved his foot to move the puck, regardless of intent, thus regardless of the on-ice official's judgment -- but it all came out wrong, so wrong.

By the end of the interview, Howie was in his best incredulous form and King was almost promising a break would swing the Islanders' way one of these days. In the name Keith Aucoin, surely.

Decent efforts and moral turmoil does no good these days, considering the hole the Isles dug themselves in November and December. This one leaves them still six points and four teams behind the fourth spot in the Metro (and everyone else has games in hand), so Wednesday's outdoor game is all the more essential for points rather than just a really novel (and freezing) experience.

At least we'll always have humor:

Nabokov on Wed.'s cold: "Well, I’m Russian." As for a muscle injury: "Maybe my wife will come down and we’ll make a massage in b/w periods."