You know what's more fun than arguing about numbers? Arguing about pictorial representations of numbers!

The player usage visualization tool at somekindofninja.com comes up on occasion in comments here, but I don't think we've ever posted an update as part of a main article.

Here then, for your quiver, is a look at how the Isles have been used at 5-on-5 through the first 53 games. A few notes before you click and play:

Credits: The data is pulled from behindthenet.ca, the concept of the charts is by Rob Vollman, and the click-ready pictorial execution for your convenience is from Greg Sinclair, the ninja behind somekindofninja.

How to use it: The best way is to visit the chart on somekindofninja, because that's where you'll get to play with Games Played parameters and mouse over individual player bubbles to get a more detailed view. 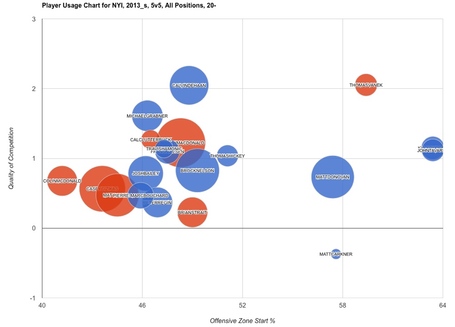 For the above chart, I put the cutoff at 20 games so as to exclude Eric Boulton. (His extremely low level of competition faced drops his bubble far to the bottom (and right), messing with the scale.) That means Ryan Strome is also excluded, but on the regular chart you can see Strome has a blue (good!) bubble with low O-zone starts.

Finally, one word of caution that everyone could use: These tools are cool, but they are not comprehensive. Not only is every data point feeding them (Corsi, quality of competition, zone starts, games played) subject to its own context and interpretation, but any visualization of the data inherently carries its own potentially misleading bias.

The bubbles and colors help conceptualize these many variables, but they shouldn't be seen as the end-all, be-all, no more than any other lone stat (fancy, boxscore, or otherwise) should be. (One obvious example: You shouldn't see Strome's larger blue bubble as proof that he is better than Tavares.)

At minimum, though, this should give you a sense of how the coaching staff has used each player over the long haul, and what general results they are getting in those roles.