The answer is Bobrov- er, Mason.

The New York Islanders visit the Philadelphia Flyers tonight, the first of a home-and-home with their historic division rivals (Monday is a 1 p.m. afternoon start) and the first of seven of the next nine against Metropolitan Division opponents.

While the odds of making the standings relevant again are long -- they are eight points behind the second-place Flyers, with five other teams between them -- this stretch will go a long way toward messing with your delicate sense of hope.

The Flyers made news today in the most Flyers of ways: They bet on a goalie they have at best moderate reason to bet on. In signing Steve Mason to a three-year contract at $4.1 million per, they have bet on 40 games in Columbus and about 30 games in Philadelphia -- rather than the other 200 games of his NHL career.

Of course, for the Flyers this was actually restraint. And for Isles fans, we know that finding and evaluating goaltending is a murky science wrapped in a vicious prank that concludes with kicking your dog. On aggregate, and against most expectations, Mason has been okay as a Flyer. Most people there and here would take okay.

Speaking of goaltending, what's going on with the Islanders' recent revival? Their 8-2-0 run that has vaulted them all the way up to ... a less bad version of last place in the Metro? Well, Kevin Poulin too has helped, against many expectations (though not the club's).

I'd maintain the Isles actually haven't played extremely different for any stretch since Lubomir Visnovsky went down. They're in most games, they've had some gut-punch lost leads and also some invigorating comeback victories. But the percentages, including goaltending and shooting, have been in their favor lately where they were nowhere near helpful earlier in the season. Their rolling 10-game PDO (save percentage plus shooting percentage) via Extra Skater: 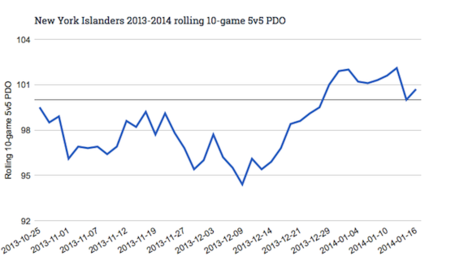 Evgeni Nabokov when he came back was better than before he got hurt, and Poulin has been better in relief this time than last time. (It's nice to have adequate goaltending, it's just tough when its pendulum swings obscure what you think might be going on with the rest of the team.) So if you know how long either will last, you are qualified to be Paul Holmgrem.

So I'm no more alarmed by the other stuff -- the Isles possession stats have ticked back down despite their recent wins -- than I was by November nights where everything went wrong, including the goaltending. Anecdotally, Poulin has played a little more composed and less scrambly lately. Whether he can ever maintain that, only trial will determine.

For now I'll take a win however they can get it.

At the other end, Mason starts because the Flyers have finally found a replacement for Ron Hextall. Right?