Apparently the Battle of New York will be held outdoors. In a ballfield. With chrome-ified jerseys.

Greetings, registered Lighthouse Hockey readers. I seek audience with you today to tell you, by the power vested in me as keeper of SB Nation's Islanders asylum, that you can win two free tickets to the upcoming non-classic "Stadium Series" outdoor game between the New York Islanders and Short Island Smurfs, er "New York Rangers."

Am I eligible? Are you a legal U.S. resident, 18 or older, and not related to SB Nation people? Then you're eligible, most likely. (See the full rules here [PDF].)

How do I win? Purely by random selection. So while I accept bribes for most things, your bribes cannot influence this sweepstakes. (Keep sending me bribes for other purposes though.)

How will I get them? If you are the lucky guy or gal randomly selected, you will be contacted and then they will be overnighted to you after the conclusion of the contest.

So that you have something to discuss other than "PICK ME PICK ME I HOPE I WIN," you can talk more about the goaltending trades made today. They are kind of funny:

Scrivens is a wonderful question because he's been good and has promising AHL history but is also well within that small goalie sample where we really have no Bryz of an idea where his real, consistent level is. Via Copper & Blue's Ryan Batty, Scrivens’ 10 game rolling save percentage. The red dot is 10 games into his time with LA: 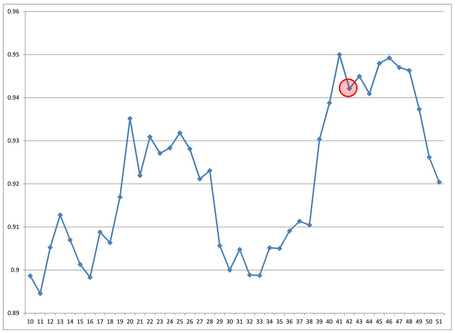 So by player history the trades are kind of a shuffle -- plus a bad 4th-liner contract -- although obviously this season Scrivens is doing much better than Dubnyk. Will be fascinating to see how both do in front of different defenses.

Oh, good luck with the contest.