Another seven goals please thanks.

The revised NHL schedule matrix this year means every team plays in every other arena at least once this year, but it's still a rare treat for two opposite-conference teams to meet twice in the space of a week.

That's what we have tonight when the suddenly road-warrior Islanders (six road wins in a row) visit the Dallas Stars just six days after trouncing the Stars at the Coliseum.

The Stars are coming off an Eastern swing that treated them very poorly, as they caught the until-recently-miserable Metropolitan Division at the wrong time. They spent all of last week in New York, losing to the Isles 7-3, the Devils 1-0, and the Rangers 3-2.

They do view the last two losses as progress, however, as the concern going into (and after) Monday's loss on Long Island was how many goals they were bleeding. On that note, the shot attempt chart (courtesy of ExtraSkater.com) from the Stars-Isles game looked bad and only got worse as the Isles piled on: 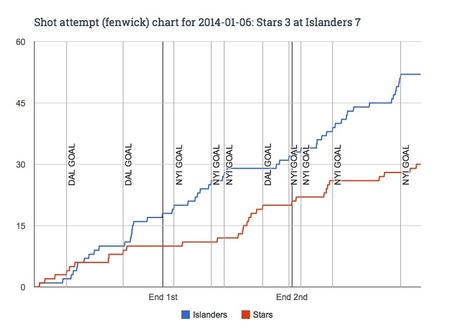 The reaction to the two losses that followed sounded a lot like how Jack Capuano and the Isles sounded during some tough stretches this season where the play was there, but the results were not. On the loss in Manhattan, via Defending Big D:

"If you are going good, you win that game," he opined. "That's just the way it is. It's no different than when we were going good before Christmas or just after. That opportunity went in the net for us, now it goes in for the opposition."

The coaching staff seems to be staying positive about the recent efforts while acknowledging the disaster that was against these same Islanders.

The five-game losing streak has really hurt the Stars, dropping them six points behind Minnesota for fourth in the Central Division, though the Stars have three games in hand on the Wild.

Anyway, tonight the Stars are on home ice, where their record (9-6-5) is a little better than their road record (11-11-2), and they're feeling better about their game despite the losing streak, and have the easy extra motivation of wanting to exact revenge for a thumping last week, in a game that did have its chippy moments.

A 6 p.m. EST start, this should be a fun one. No morning skate, so any lineup notes will come out after 4 p.m. EST.

Leave your First Islanders Goal picks over this way.