This one wasn't as fancy as his solo backhand earlier in the game, but it was just as brilliant.

Hockey fans love power and they love finesse, but sometimes a goal comes not from how hard a player shoots nor how pretty the setup, but rather the location and the timing of when he chooses to do it.

New York Islanders fans who have watched Frans Nielsen in the shootout for years have noticed the first option he uses to counteract goalies who are expecting his go-to "Backhand of Judgment" move: He tries to catch them off guard, or cheating for the closer approach of his backhand, by targeting the five hole with a quick-snap low forehand from the slot.

The location of his release is earlier than most shootout shooters -- particularly any that are planning a deke such as his favored backhand -- and the choice of a low shot means aiming is easier (he's not picking a corner) and most likely to catch a goalie before he has set and blocked the five-hole.

John Tavares used a similar shooting theory to notch his hat trick on the power play in Monday night's 7-3 win over the Dallas Stars. Below is video of the goal from several angles:

Setting up the Shot

As you'll recall, the game was already out of hand, but the Islanders received a late and lengthy power play with which to attempt to get Tavares his hat trick. With a 5-on-3 advantage, the Islanders moved the puck around quite a bit, side to side, forcing lots of lateral movement from Stars goalie Kari Lehtonen, who was game to the task.

Low-angle but well-set-up shots from Ryan Strome on the left wing and Nielsen on the right did not beat Lehtonen ... but they may have set him up to be beaten by Tavares head-on.

This is absolutely a case where context is key to shot selection. (Though rare is the occasion to have the luxury of such context, a long power play with lots of possession is one such occasion.) You simply don't typically see Tavares score from this distance, even on the power play.

So the context here was not only the low-angle, wide-side shot attempts by the aforementioned Islanders, but also the presence of Matt Martin directly in front of Lehtonen for the screen as Tavares surveys his options. Earlier in the shift, that screen is a distraction, but also a decoy as the Isles were setting up the men on the wing for shots.

And that, of course, is the perfect time for Tavares to change it up by shooting straight on, from distance, and low to the ice. Generally, when a goalie is fighting a screen but not expecting a shot, he will stay more upright, the better to be able to survey the scene and move to one side or the other, as the Isles had forced him to do on the previous attempts.

[Screenshots below via NHL.com highlights] 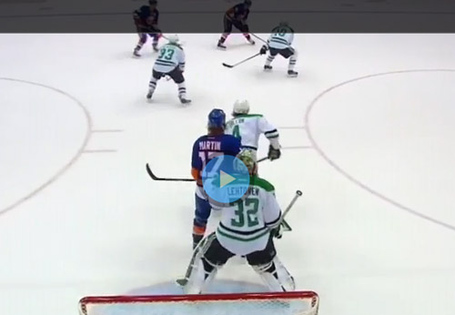 Tavares has decided to shoot, but Lehtonen is still in the upright position, trying to visually navigate the screen while remaining prepared for a pass to either wing.

Of course, this is also the situation when the point man with the puck can surprise the goalie with the greatest likelihood of succeeding. Tavares, then, moving forward, sizes up the screen by Martin and his defender, fakes a pass to the left wing where Colin McDonald is cocked and ready for the pass [see full video above], and instead unleashes a hard, low shot with little wind-up.

The result is the kind of shot that isn't always threatening from such distance -- on the ice, hard but not big-wind-up-hard -- but in this instance it is the perfect shot to beat Lehtonen based on the build-up before it. 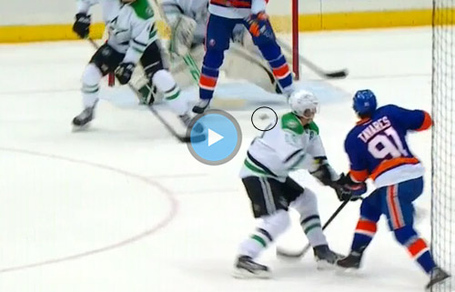 Tavares has unleashed his shot (it's sliding on the ice, circled above), but Martin's screen and the setup before this point means Lehtonen cannot drop down in time.

The added irony here is that had Lehtonen not moved at all, his left pad was in position to stop the shot. But the act of going down opened up a wider five-hole gap, as his left skate moved further out in the process that normally, but not always, reduces the odds of a goal. Such is life in the butterfly, play-the-percentages era.

It's a subtle thing, but a lovely thing. And it's why the goal that brought the hats down on the Coliseum ice came not from a great pass, one-timer, or powerful blast, but rather from an intelligent player using the options the situation afforded him.