If you're an Islanders fan of certain addictive tendencies, or if you've come here for the Zeitgeist and stayed for the lineup OCD and prospect quarrels, then you've already mulled each of these questions all summer long. But here is how the key unknowns look with the latest info as the Islanders' Oct. 4 opener in New Jersey nears:

1. Will the Goaltending Hold Up?

This question either surprises you -- you may remember Evgeni Nabokov's hot final third as the Islanders made their surge to the playoffs -- or fills you with familiar dread since Nabokov's stats outside of "wins" have been bottom-third among NHL starters.

However, as discussed in our goalie preview, if Nabokov plays simply as well as he did last season on aggregate, his rank among NHL goalies shouldn't hurt the Islanders. What could hurt them is if his backups fail to meet the grade. So far, Kevin Poulin (the incumbent) and Anders Nilsson (the challenger) have unproven and undistinguished records in the AHL.

But they're both young and have injuries in their recent past that at least open the possibility for improvement. With a full 82-game season where the 38-year-old Nabokov will need help, the opportunity to sink or swim will be there for both Poulin and Nilsson, regardless of who backs up and who carries the load with AHL Bridgeport.

Prediction: The Isles shop for goaltending help by mid-season.

2. Will the Prospects Step Up?

It's the most intriguing part of camp. Whether it's Griffin Reinhart's surprising bid to earn a spot one year early, or the three-way battle between Brock Nelson, Ryan Strome and Anders Lee to claim a forward vacancy left by Cal Clutterbuck's injury, the Islanders are teeming with prospects who many fans would happily see now rather than later.

What it provides today is training camp intrigue. What it spells for the future is serious depth and injury insurance. Nelson is in the pole position to win an opening night job, but bet on he, Strome and Lee all spending time with the big club this season.

On defense, the Isles also have promising depth, though Reinhart is likely headed back to juniors eventually. The big name is Matt Donovan, who is expected to pick up some of the offensive slack left by power play quarterback Mark Streit's departure to Philadelphia.

Prediction: Donovan produces, Nelson becomes a jack-of-all-trades who can't be demoted, and Strome provides a boost by mid-season.

3. Will the Islanders Pick Up Where They Left Off Last Spring?

The golden question for every first playoff appearance during a rebuild: Have we arrived, or are we a fluke? It's a question the Penguins answered firmly in 2008-09, rebounding from a first-round spanking by Ottawa to reach the 2009 Stanley Cup finals. The Blackhawks followed their playoff debut in 2009 (a Conference finals appearance) by winning it all in 2010.

Then there was the 2008-09 Blues -- a more faithful parallel to the Islanders anyway -- who rode a late surge to the playoffs that year only to miss the playoffs the next two seasons. With the questions noted above, the Isles could always end up taking that step back too. 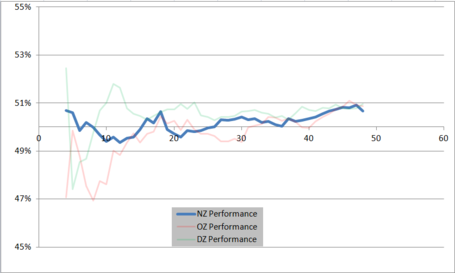 The Islanders' even strength play improved over the course of last season.

But the Islanders' play last spring indicates a corner turned, so they should not take a major step back. New captain John Tavares won't let them. They ended up a strong possession club last year (one reflection of that, and the chart above, is in this in-depth post on that topic) and a team that is only poised to grow.

Barring catastrophic injury, disastrous goaltending, or a sudden tuning out of what coach Jack Capuano is preaching, the Isles should at least match last year and probably meet increased expectations this season.