EA Sport's NHL 14 will feature a full-scale recreation of next year's Olympics including controversial team creation, bad jersey designs and gay panic in the virtual streets.

Share All sharing options for: NHL 14's 'Olympics Mode' Brings the Excitement and Controversy of Sochi to Your Living Room

NHL 14 is Back! But it's not just about the National Hockey League! This year, players can experience international hockey like never before with EA Sports' revolutionary OLYMPICS MODE! 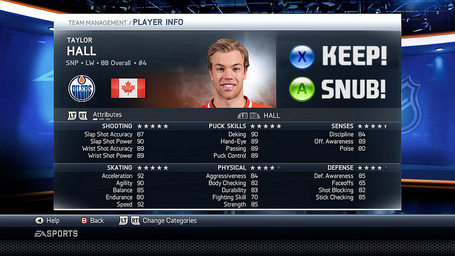 Putting together the best possible national team will be key in Sochi, but that also means knowing who to cut. At NHL 14's new SNUB HUB, you can choose which international hockey star to bounce from your team to create the biggest fan backlash. Will you stick to your guns or cave in after seeing how angry and puzzled you make everyone?

Use NHL 14's built-in synthesizer to craft your own custom national anthem. Share your creation with friends and play the anthem together using genuine Guitar Hero or Rock Band instruments (sold separately). 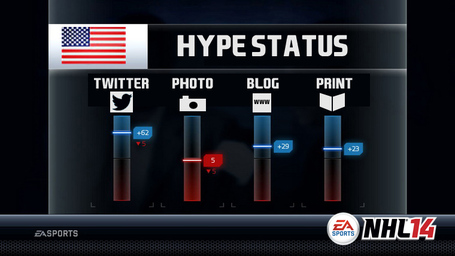 For the first time in the NHL series, EA Sports invites you to step away from the game and become the Fourth Estate!

In SUPER MEDIA BROTHERS, the object is to catalog every single moment of an Olympic team starting two years in advance. Using Twitter, blogs, columns and pictures, you can create goaltending controversies, project hypothetical lines, report on innocuous events and insinuate personality conflicts about any national team.

After selecting which skaters and goalies to invite to camp, you can enjoy a relaxing game of ball hockey with your favorite NHL stars. BALL HOCKEY MODE does not feature hitting, checking, saves, shots or any movement of any kind.

It won't make the team any better, but it beats sitting around in the summer watching game film. Customers pre-ordering NHL 14 through TOY'S R US will receive a code to unlock a special "Shorts and Flip-Flops" Skin for all Ball Hockey teams. 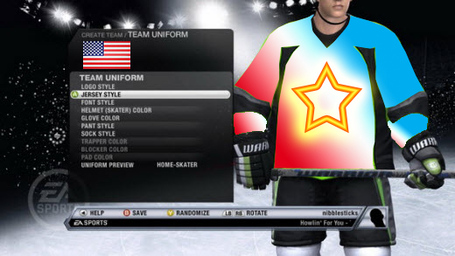 Create a unique uniform design for your country using Nike™'s high-tech materials, glorious gradients and striking prints. Your team can take the ice in a different set of neon plaids, Earth toned argyles and terrific tattersalls every game! 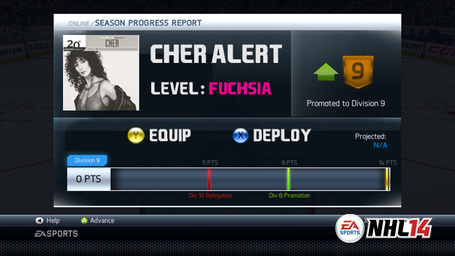 Take control of a member of new Sochi Branch of the KGB (Kibosh the Gays Bureau) and scrub the Olympic village of all homosexual propaganda and images in accordance with Russian law. Use stealth tactics and strategy to make sure no hockey players are seen embracing after goals, listening to Cher, or teaching children about shaving their body hair. Can you create a perfect Utopian society in which everyone is exactly the same and only lives the life you allow them to under penalty of imprisonment or worse? Go for the gold!

This is a satire. I'll be playing Blades of Steel on Sept. 10th.