Two contrasting goalies with a lot of time on their hands. The updating of a classic sitcom. Is it enough to save NHL Network?

The following story appears in the September issue of Entertainment Weekly and is printed here with permission.

Tim Thomas' house is packed with pre-teen girls in pretty pink princess dresses. The Vezina and Conn Smythe Trophy winner is frantically searching for his goalie mask and pads while trying to not step on Barbie dolls and roller skates and tiaras. The girls were invited to the house by Thomas' roommate Ilya Bryzgalov, who misunderstood the type of "Tea Party" that Thomas is most closely associated with.

This is a scene from NHL Network's new reality series "Perfect Strangers: Timmy and the Bryz," a show the National Hockey League is hoping can turn its struggling TV outlet into must-see programming for puckheads.

Thomas and Bryzgalov are both longtime NHL goalies who are currently free agents looking for work. But that's where their similarities end.

Thomas, who backstopped the Boston Bruins to the 2011 Stanley Cup, is a staunch conservative from Michigan who has professed his priorities as "faith, family and freedom." Bryzgalov is an effervescent Russian known for spouting off sporadically about the cosmos, the media, dogs or anything that's on his mind at the time. Thomas chose to step away from hockey for a year, this following his highly-publicized refusal to meet President Obama at the White House after the Bruins' championship. Bryzgalov's massive long-term contract was bought out by the Philadelphia Flyers, who found him to be a distraction off the ice and a liability on it.

The idea of having these two disparate goalies live together while negotiating their next contracts is the brainchild of NHL TV big wig John Collins and a man who knows everything about being a Perfect Stranger - Mark Linn-Baker, who starred in the classic 1980's show that's being updated for a new era and audience.

"Tim and Bryz have all the makings off a great TV couple," says Linn-Baker, who is an executive producer of the new show. "They're like Archie and Edith Bunker or Felix Unger and Oscar Madison. Even though they have these strong, opposing points of view, they know that they're two sides of the same coin. They work together so well because they're so different. It's been fun to watch develop."

The series began filming in early July, just a few weeks after Bryzgalov was let go by the Flyers. Linn-Baker contacted the agents for both players and made his pitch. The pair would live in an apartment in Chicago while working out new deals with prospective teams. They'd practice together, eat together and relax together for the NHL Network cameras. Linn-Baker admits it took some coaxing to get both to say "yes."

This Fall on NHL Network 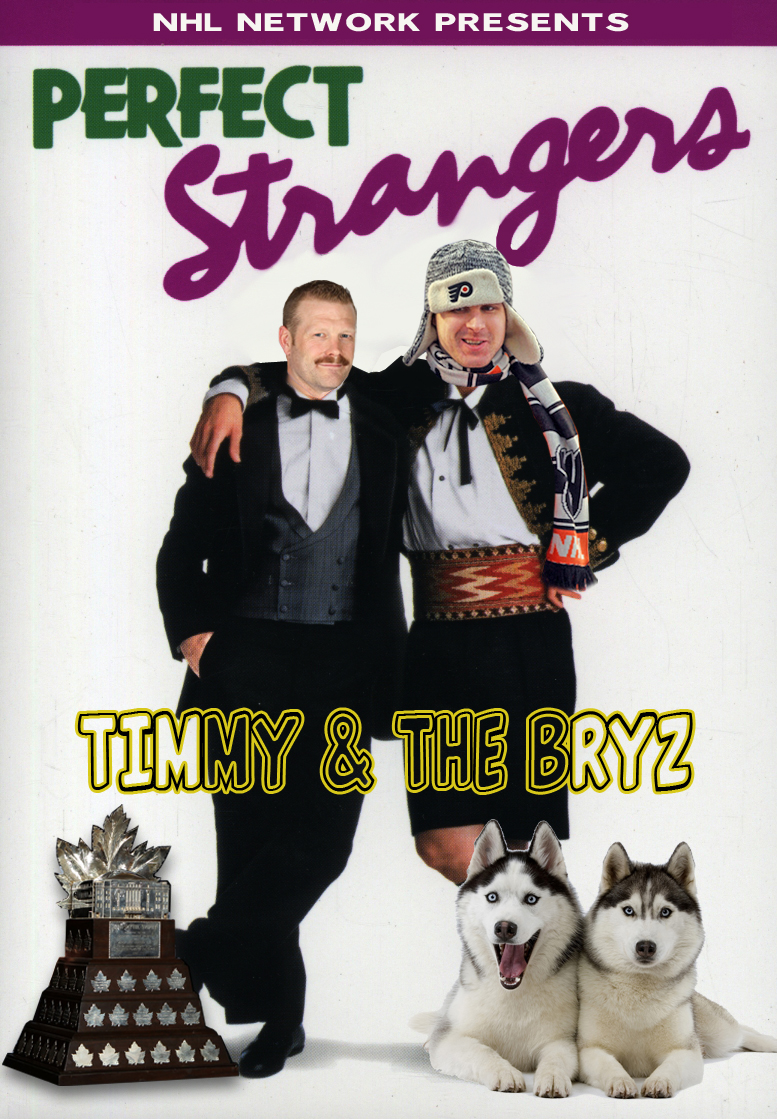 Two goalies, one apartment. Standing tall on the wings of their dreams (click here for more)

After seeing the success of HBO's two 24/7 series that focused on big market teams preparing for the outdoor Winter Classic games, Collins and the league were looking for a flagship behind-the-scenes show that would draw people to their little-watched network. The partnership between Linn-Baker's idea and the NHL's platform quickly fell into place.

Linn-Baker had wanted to re-invent "Perfect Strangers" as a reality series for years. But it wasn't until this summer when the Yale Drama School graduate (and hockey fan, who attended New England Whalers games during his time in New Haven), finally found the perfect cast. The all-American, well-traveled-but-never-deterred Thomas would be the new version of Linn-Baker's Larry Appleton character, while Bryzgalov was a natural to recreate the well-meaning but oblivious visitor Balki Bartokomous, famously played by Emmy nominee Bronson Pinchot.

Immediately, Linn-Baker knew he was right. Within their first few days together, Thomas and Bryzgalov were already making comedy gold, misunderstanding motivations, annoying one another with strange hobbies and customs and alternating between respecting and irritating each other.

"The formula works because of the personalities, not the characters," says Linn-Baker. "Bryz doesn't need to be Balki. He can still be just Bryz. But that sense of childish wonder without the hang-ups and prejudices Americans have is something they both share. And Tim, like Larry, believes in hard work and making your own way in the world. They need each other, and they're always learning from one another."

Eight episodes have been completed, with four being made available for critics. In each, Thomas and Bryzgalov find themselves in silly sitcom situations while hoping to get that next contract and make it back to the NHL.

Collins says other episodes will see Thomas and Bryzgalov getting trapped in a bank vault, dating the same woman at the same time and buying an ice cream truck full of black tar heroin.

"Viewers won't believe what happens to these two," said Collins via e-mail. "Every week, they get into a wild jam and scramble hilariously to get out of it. We're very confident that fans of both hockey and sitcoms will tune in to see what they do next."

Thomas refused interview requests for this article, maintaining that's he's only focused on getting back into the NHL. But Bryzgalov was positively gushing about his new unlikely friendship with a rival and their unique living arrangement.

"Timmy is a good guy. I like him very much," Bryzgalov said via phone. "I did not know him well before. But living here with him, training with him I feel a real love. Like two moons orbiting one planet, we are in perfect harmony. When he's day, I'm in night, I'm summer, he's winter, he's cat, I'm dog. I'll be sad when we get calls to play again."

As for living up the legend of Balki Bartokomous, Bryzgalov isn't worried, mainly because he has no idea who that is.

*THIS IS A PARODY. IT'S NOT REAL. THIS WON'T BE SEEN IN E.W. OR ANY OTHER MAGAZINE. THESE INTERVIEWS NEVER HAPPENED. THERE IS NO SHOW. UNFORTUNATELY.

The brilliant idea for this came from the mind of Mark D.