Share All sharing options for: Ziggy Palffy's Career: Memories of the one-man Island(er)

Ziggy Palffy played in the era after NHL stars routinely racked up 100-point seasons but before the tedium of a lockout got the league to finally enforce rules that were always on the book anyway crack down on "obstruction."

Which is to say, Palffy's routine 40+ goal seasons for awful Islanders teams were remarkable achievements, ones that would have been televised more if the once-proud franchise mattered to anyone beyond the Island and its ex-pats. (And future carpetbagger bloggers.)

As The Hockey News trollingly yet aptly described on its cover in January 1997: "No Man Is An Island ... except, maybe, free spirit and scoring star Ziggy Palffy."

In truth, THN wasn't just dinging the Islanders for being a one-man show (apologies to Robert Reichel, a still-useful Derek King and the Bryans -- Berard, McCabe and Smolinski); they were also capturing Palffy's charismatic personality that befit a star. Except this star toiled in obscurity.

Whether you're talking about the quirks...

...or the skills, Palffy had all of that.

You know the handsy players who show up to no-check pickup games and spend the time hogging the puck doing dipsy-doodle roller moves, and you think, "That's kind of uncool, because you would be knocked on your ass if this weren't no-check, and the only reason there is no checking is because we all have to work tomorrow, and you're acting like you have NHL skills, so dammit one of us is probably going to check you anyway."

You know those guys? Well Palffy had those skills at the NHL level. It can't be emphasized enough how much more impressive these skills were when he was surrounded by mostly junk on a cheap and poorly managed Islanders team.

Yes, the Islanders are still "cheap" today, but understand that today that is within a fairly narrow CBA-prescribed payroll range. Back in the '90s, the Islanders payroll would be as little as one third of the top teams. Also, while today the Isles develop cheap young talent, back then Milbury traded it for Veteran Presence and anyone who would sign a pledge not to sniff glue.

To put it another way: Today the range from floor to ceiling is $16 million. Back in Palffy's time, the Isles entire payroll would be around $16-20 million, while the big spenders pushed up to and passed $50 million.

Or yet another way: In 2001 the Blues let ex-Isle Pierre Turgeon walk for free -- he signed in Dallas for $6.5 million per -- as they acquired Doug Weight and paid him a $9 million salary. That same summer, the Isles were coming off a season with a $24 million total payroll.

That's way too much about money, but then that's why Palffy ever became an ex-Islander. The owners at the time "couldn't afford" him and didn't need their only superstar, because the team was just part of the endless developer pursuit of a land deal on the most central, underdeveloped property in Nassau County.

Anyway, Palffy was good. Really good. But some of us forget that now because we haven't seen him play in so long, and even back then, the viewings were hard.

As PGI -- whose user name was inspired by the "Pretty good idiot" line from Palffy negotiations -- pointed out earlier in our tribute day, Palffy played before YouTube, for a bad team (and later, on breakaways for the West Coast-ignored Kings), so you won't find many of his Isles highlights on the Web.

Like this one, which some of our readers remember:

Other than a sharp, deceptive shot, those highlights aren't even that illustrative of Palffy's danger, but it's what we have, as memories are fleeting. (Poor Bruins goalie Paxton Schafer there. His NHL career was not long.)

Case in point: Earlier we collected some memories from fans and pundits around the web. Now here are some thoughts from our LHH crew:

I actually met Ziggy Palffy at an autograph signing in either 96 or 97. I don't know whose bright idea it was to have Ziggy at an autograph signing on Staten Island. There were like maybe 40 people on line when it began. I was at the end of the line and he blew through it in like 15 minutes. He was scheduled to be there for 2 hours, so maybe they were expecting more interest.

I also frightened Palffy by shaking his hand. It was the first time I met a pro athlete, and I thought it was normal cause the guy before me had. I don't think I'll ever forget that look of confusion on his face.

Whose Mullet Is This? 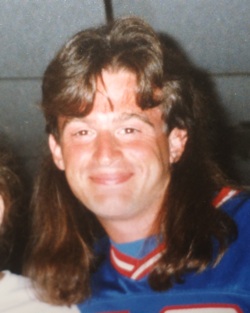 The best photo ever published at Lighthouse Hockey?

I really don't have many memories that stand out for Ziggy.

I just remember that my mullet coincided with his.

My mullet bookended Ziggy's by a lot.

I don't have a lot of memories of him because I didn't have sportschannel then...just loved him via the backpage and the boxscore and highlights.

I remember the #68 in the early days of Palffy. I always read it as "Damn, we got hosed out of Jagr and were stuck with Scissons, so heeeeeere's Ziggy!"

I don't think the Isles ever really knew what to do with him. It was obvious he was their best player, and equally obvious that they had nothing they could surround him with and afford at the same time (thanks, 14 terrible owners!), and obvious most of all (to everyone else at least) that he was smart enough to figure this out early and fly the coop.

These are the days everyone thinks of when they think of the "nobody wants to play for/sign with the Islanders" days. Amazing that Palffy is retiring, most of the rest of those guys are already out, but the perception endures among the media and particularly dumb fans.

I always think of the #68 too. I remember they gave it to him in that "Surely all you people appreciate this" kind of way, probably not realizing it meant much more to Jaromir Jagr, a Czech whose grandfather died during the 1968 "Prague Spring," than to Palffy, a Slovak. He soon changed to #16, but I think I already created him in EA's NHL Ninety-whatever as '68.

Aside: Fittingly, Palffy played through the whole of the Islanders' existential uniform crisis: Dynasty-style threads, Fishsticks, waves with the old crest, and navy and burnt orange.

I didn't get to see many games in this era, mostly NHL2night highlights and road games a few times a year. I just remember how explosive he was, yet so calmly lethal on breakaways. When he deked, it never seemed like it should make the goalie look as foolish as he did. He was never panicking against the goalie; he casually assessed the options, found the openings like a surgeon.

Palffy's holdout was rare in that EVERYONE sided with Ziggy. I don't even remember what he was asking for, but whatever it was, the Islanders were stupid to not give it to him. Which, of course, led to Milbury getting testier and testier as the questions about Ziggy's absence mounted, the "village idiot" line and a horrific first half of the 1998-99 season.

I'm not sure I remember a contract squabble in which every person but those working for the team sided with the player without reservation. That's how much he meant to them.

Ziggy Palffy: So good, in a situation so dire, everyone was on his side.