The Isles stuck to their pattern as free agency opened, locking up a core player, adding on the edges...and still looking for the ultimate answer in goal.

The New York Islanders kicked off free agency 2013 the way they usually treat their summers since Garth Snow became general manager: Locking up a player they see as "core," shopping for under-the-radar finds, kicking the tires (reportedly) on bigger names.

Between additions and re-signings, the Islanders made decision up front, on the blueline, and in goal. A day later, here's an overview of what they did, what they were probably thinking, and how their moves fit into the picture for 2013-14:

When word surfaced that the Islanders inquired about Danny Briere during the post-buyout pre-free agency flirtation period, your assumptions were confirmed that they were looking for a skilled winger who was probably not named Brad Boyes. They appear to have found that in Pierre-Marc Bouchard, but his addition isn't a straight up Bouchard-for-Boyes/Parenteau swap.

Unlike Boyes and P.A. Parenteau before him, Bouchard is a left-handed shot. That means he isn't as natural of a fit on the left wing boards for the Islanders' power play setup (where right-shooting Parenteau and Boyes stationed), and if he gets even-strength time next to John Tavares and Matt Moulson, it will make a trio of lefties. That said, Bouchard does have experience on both wings and his finesse hands in tight demonstrate that he's not someone limited to one side of the ice.

While it's always possible Bouchard steps in and sticks immediately on Tavares' wing, the Isles moves' (including adding Cal Clutterbuck in the Nino NIederreiter trade) demonstrate an overall upgrade and increased flexibility with their forward lines, where wings are probably going to be able to swap lines as flow, injuries and opponent dictate.

In the playoffs the Islanders showed more line flexibility on the wings. Separating Moulson and Tavares for essentially the first time in three years reflected how the Islanders are building up an arsenal of options depending on opponent. Kyle Okposo's playoff performance was what many have been waiting for from this fellow "core" member, though that doesn't mean we should expect him to start next season in playoff form.

Bouchard signed for one year and $2 million, a frankly bargain rate that probably builds in his concussion history and perhaps represents his desire to "do a Parenteau" and parlay a good opportunity with the Isles into something bigger.

Less impressive than Bouchard but perhaps more interesting in terms of a low-cost, low-risk gamble is the Peter Regin signing for one year at a reported $750,000. He has demonstrable talent and at one time you could have seen him following a Frans Nielsen path to a smart two-way game with some relative offensive skill. But his mostly upper body injuries threw that path into question. As we've seen with other shoulder injuries, a player can return to playing for a half season or so before he fully returns to form. For Regin, an injury recurrence throws that timeline out of whack.

If Regin's offense never returns -- or never arrives to begin with, depending on your lens -- he still represents a strong guy for the bottom six. It's interesting that the Isles went with the new and injury-caveat of Regin over Keith Aucoin, who signed with St. Louis for a reported $625,000 according to CapGeek Aucoin is older but has more offense and appears to have fully accepted the need to adapt to a bottom-six role for NHL work. Regin is younger but has lower offensive potential and the noted injury history.

Regardless, the prospects who are pushing from Bridgeport give the Isles options and injury insurance which has increased with each year since the rebuild began. 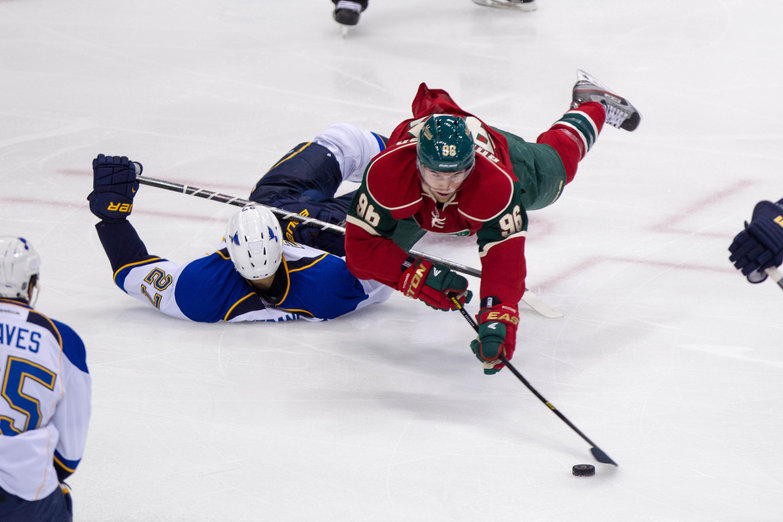 What do the advanced metrics for Bouchard and Regin say? Bouchard makes teammates better; Regin is clouded by his injuries.

It's funny when big-splash-chasing fans treat the Hamonic deal as if it was the "only good news" Friday, because that reflects a view with rather limited context. No, the Islanders didn't make big splashes on Nathan Horton or (thank Bossy) David Clarkson, but the teams that made those big deals know instantly they've paid big in the future for a hoped payoff in the present.

Frankly, good moves are not limited to big names or long-term deals, and long-term deals are best when you're buying ages 24-31 rather than ages 28-35. This summer's buyouts underline that reality of the aging process that eventually catches up to all of us.

So Hamonic then: Was his seven-year, $27 million extension a good move by the Islanders? Almost unequivocally yes.

It's still debatable how much better Hamonic will get, but he's absolutely a top-four defenseman on any NHL team. In signing for seven years, both team and player have compromised in eating three of his would-be UFA years too. Hamonic at his current abilities is worth the average $3.86 million of this deal. If it ever becomes a bad deal, it would be through injury rather than an aging decline.

The defense hasn't changed -- relative to the already known status with Mark Streit gone and a prospect presumed to replace him. But we now know, as we surely always presumed, that Travis Hamonic is in this thing for the long haul. Nothing about the kid, from his draft day to his early orientations with Brendan Witt to how he's performed since making the NHL, has ever given any impression other than a kid who believes in the direction of this franchise and who wants to help lead the charge:

"We're building something special here," Hamonic told Newsday after the contract was done. "I never would have signed for this long if I didn't truly believe that. Seven years is a long time. To me, that's enough time to win a couple Stanley Cups."

Now thanks to a seven-year deal, we'll watch this already mature kid become a man.

Meanwhile, the Newsday story on Hamonic's contract says the Islanders are working on a two-year extension with Thomas Hickey. That's appropriate and promising given his rookie year and the Islanders' expected depth on defense looking two to four years out.

If there is cause for alarm among Islanders fans, it is in goal. The Islanders were unable to address that and in fact, publicly at least, say that the re-signing of Evgeni Nabokov makes him "absolutely" the number one goalie.

We'll see how things play out the rest of the summer and into the season, however.

Earlier this summer Snow said he preferred to have Anders Nilsson and Kevin Poulin share time in Bridgeport in 2013-14. If that's still the preference, the Isles will need to add someone from somewhere, somehow. If in the off chance they add an established NHL goalie, Nabokov will have the comfort of $3.25 million to take the sting out of competition for the starter's role.

Nothing enlightening here, but this is special assistant Doug Weight giving the organizational view on the moves: