Two new players joined the Islanders organization today: Pierre-Marc Bouchard, formerly of the Minnesota Wild, and Peter Regin, formerly of the Ottawa senators. Who are these guys? Where do they fit? Are they any good? Let's take a look:

PMB is a winger (despite being occasionally labeled at Center, word is he played practically nothing but wing for the Wild, and has experience on both wings) who has had trouble staying healthy for the Wild. PMB's issues stem from concussions - a scary word these days. That said, he played 43/48 games this past season and all 5 playoff games for the Wild.

Pierre-Marc Bouchard (PMB): Has some interesting fancy stats. He's never played against top competition, but he's never had particularly great linemates either. He wasn't playing a particular defensive or offensive role for the Wild, he was basically playing a neutral role.*

*Of note: PMB has played PP but not PK while with the Wild - so expect the same here for the Isles. PMB was demoted to second unit PP this past year for the Wild, though he was on first unit in the past.

But in 2010-2011, and 2011-2012, he was CRUSHING in that role. The Wild were pretty bad possession teams those years, but the team's corsi was 12 shots better in 10-11 with PMB on the ice than without and over TWENTY shots better in 11-12. This awful possession team was basically even with PMB on the ice, and PMB's linemates were not very good. That's pretty impressive.

This past year, PMB's relative corsi is basically even - the team was only marginally better with him on the ice than off of it - but the team's possession #s with him on the ice were basically the same. In other words, the other forwards' #s improvement is at least part of the cause of this seeming decrease in his #s.

In short, PMB seems to be at least a decent possession player, if not a great player at driving possession like in the two previous seasons. But are we sure that these #s are showing off PMB rather than one of his linemates? Well: 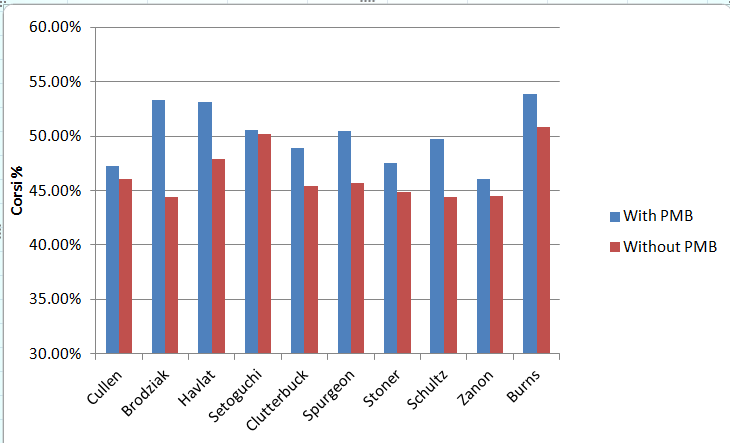 Figure 1: The Possession #s of the most frequent linemates and Defensemen who played alongside PMB over the last three years.

Figure 1 shows PMB's "WOWY" statistics. WOWY stats show the team's performance "With or Without You." In other words, the blue bars show each of the players' corsi %s with PMB on the ice alongside that player, while the red bars show those players without PMB on the ice. These #s are for the last three years.

Okay, so PMB drives possession. How's his offense? Actually not bad: Averaging just under 2 Points per 60, with a strong rate of scoring goals. PMB's Even strength goal scoring would put him just behind Grabner, Tavares, and Moulson in goal scoring over this period of time, and is in the top 1/3 of forwards. Despite his reputation as a playmaker, his assist rate isn't great, though some of that IS his linemates, who aren't exactly big scorers.

Moreover, we actually have some neutral zone data on PMB since those #s were tracked in 2011-2012. PMB carried or passed the puck into the offensive zone on roughly 60% of his entries AND he did this while taking a large role in the neutral zone. That's pretty impressive.

SO where will PMB play next year? My bet: On the first line with JT, MM, and Boyes. PMB's #s scoring wise are practically identical to PA Parenteau - more goal scoring but less playmaking - during his time with the Isles. And these #s come without as good linemates as PAP had - so PMB's #s should only improve along such linemates. Meanwhile, like Parenteau, PMB improves his teammates' possession #s and is more than solid in the neutral zone. He's certainly a good bet to surpass Boyes' performance next year, and at 2M is a real steal for the Isles.

PMB's concussion problems are no laughing matter, but in theory, their impact on his physical ability should be limited (his mental ability on the other hand is different).

By contrast, Peter Regin has had multiple shoulder (Shoulder surgeries in both the 2011 and 2012 offseasons) and upper body injuries (2013 season) over the last 3 seasons, taking a player who once was clearly a very good center to the brink of being out of the NHL. The Isles are giving him his last chance, having signed him off the scrap heap for nearly nothing. What has he done in the past and what is he likely to do in the future?

As you can see, we have very limited data from Regin's last two seasons - he was both injured and a frequent scratch last year (with basically no minutes), and was out nearly all of the year before. But the two years prior, before his two shoulder injuries, he was a VERY effective possession player. He was in a little easy minutes, but not incredibly easy at the time.

That said, while Regin was a pretty good possession player, he was never really a good scorer. He wont put up many points and didn't even in his good years. So unlike PMB, he's clearly not a top 6 player even if he regains his form.

That said, in limited time with the Sens last year, Regin was very meh. The team was slightly worse with him on the ice in his not hard minutes, which isn't what you want from a 3rd-4th liner who can't provide offense. It makes you wonder why the Isles didn't try to keep Keith Aucoin, who wound up signing for less than Regin in St. Louis.

If Regin can regain his form from before his shoulder injuries, he could boost the third line again, where he'll likely play. On the other hand, if he can't, well he'd only hurt this team and the likely 3rd liners (Clutterbuck/CMac, Grabner).

Is it possible Regin isn't on the NHL Roster to start next year?

My original inclination over Regin was that he would, like every Snow signing so far, make the NHL roster despite the presence of prospects seemingly ready to take an NHL role.

However, Regin's injuries make me wonder if that'll be the case - if he's clearly out of shape and not recovered in preseason, the team could certainly IR him as injured and start a kid (if he's injured, they can't waive him iirc, and I suspect the team would rather scratch him than waste the cash, little as it is). That said, I wouldn't be too sure.